Finally the House does... something

John Boehner's hardline debt ceiling plan makes it through. But it has no chance in the Senate. So now what?" 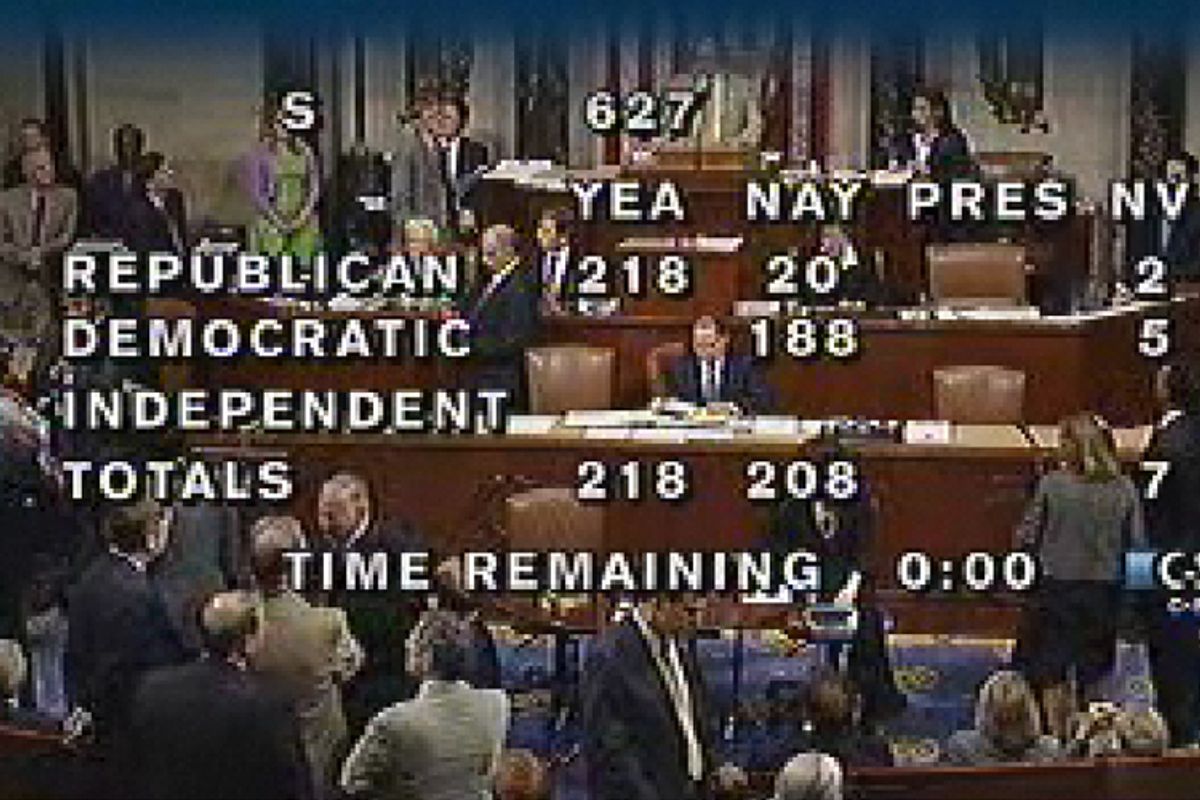 Nancy Pelosi called it a "total waste of time." Harry Reid promised it would be "dead on arrival" in the Senate. The White House threatened to veto it. Nonetheless, after much drama, the U.S. House of Representatives finally passed the new, revised, more-friendly-to-the-Tea Party "Budget Control Act" by a vote of 218-210. 22 Republicans voted no. Not a single Democrat voted yes.

Speaker of the House John Boehner should be proud of himself. He's had quite a week. On Wednesday Boehner had to delay bringing the first version of his plan to the House floor after his caucus erupted in dismay at a Congressional Budget Office analysis that declared the bill would not deliver the spending cuts originally claimed by the Speaker. On Thursday, after nearly two hours of debate, Boehner was forced to postpone a scheduled vote when it became clear that his measure would not pass. And then finally, on Friday, with only four days remaining before the August 2nd debt ceiling deadline, Boehner orchestrated passage of a bill that has no chance of becoming law.

At the same time, in the seven days since Boehner abandoned the "grand bargain" negotiations with President Obama last weekend, the Dow Jones Industrial Average fell 598 points, or 4.2 percent, its worst weekly showing of the year. It's almost as if investors were influenced by the Speaker's remarkably inept performance. It's almost as if Wall Street is somehow alarmed at the chaotic uncertainty that Republicans have injected into the process by which the U.S. government pays its bills.

So where do we stand? The ball is in Senate Majority Leader Harry Reid's court. His first step will probably be to "table" Boehner's bill, thus swiftly consigning it into never-never limbo land. He will then begin the convoluted process of proceeding towards a vote on his own debt ceiling bill.

The big difference between the Boehner bill and the Reid bill is simple. Boehner's plan offers only a short term hike in the debt ceiling, after which both houses of Congress must pass a balanced budget amendment in order to get the ceiling lifted again. Reid's bill extends the debt ceiling into 2013.

Talking Points Memo's Brian Beutler has a nice analysis of the maneuverings necessary to get enough Republican Senators on board the Reid bill to beat back a filibuster. The short version is that the horsetrading is likely to hinge on some kind of trigger that will ensure further, more ambitious spending cuts and tax reforms down the line.

Whatever emerges from the Senate over the weekend will then go back to the House, and that's where this whole drama will reach its peak. The Republican hardliners are unlikely to vote for anything they deem weaker than the Boehner bill. But Boehner will put his own career in jeopardy if he pushes through a bill that relies on too many Democrat votes to gain passage.

The clock will be ticking down, the markets will be on a razor's edge, and the health of the U.S. and global economy will be at stake.