Where's the outrage in Norway? 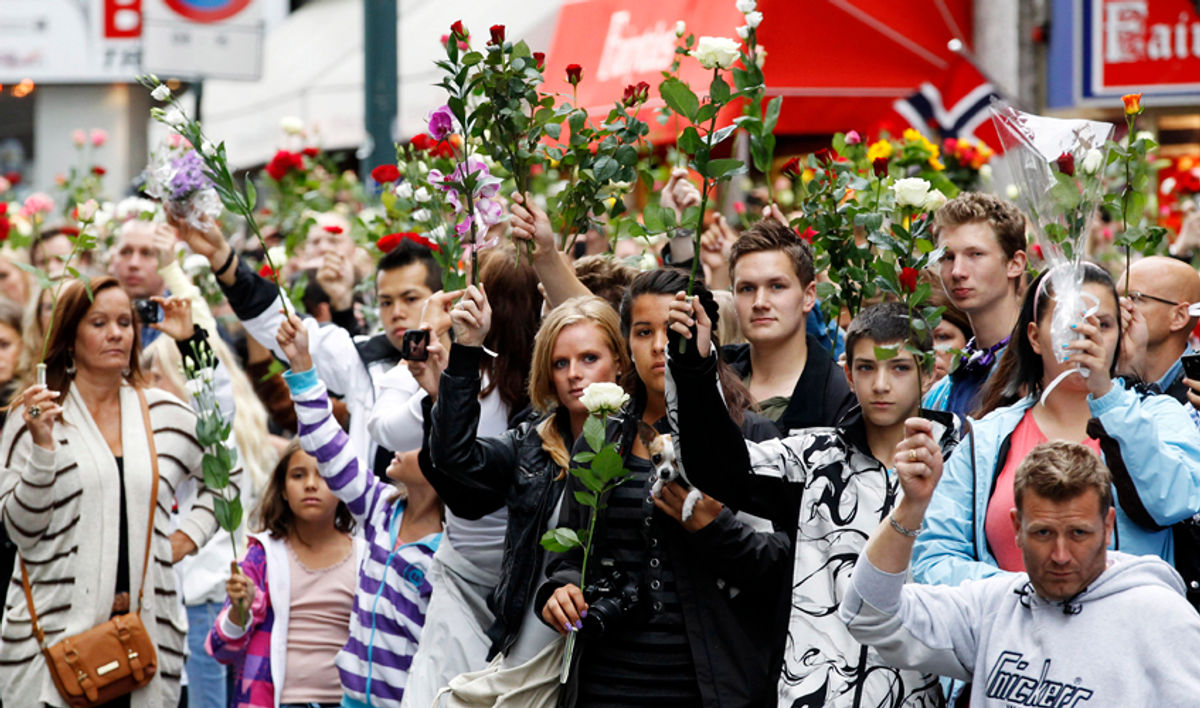 OSLO, Norway -- In Anders Behring Breivik's sickest fantasies, he never dreamed he'd be able to blow up downtown Oslo, sail smoothly in a fake police uniform to Utoya island and have 87 unhindered minutes to slaughter his teenage targets.

Even Breivik, on a drug-fueled mission to destroy everything his country stands for, had faith in Norwegian law enforcement. "He was surprised that he reached the island," Breivik's attorney Geir Lippestad told a news conference. "He was expecting to be stopped earlier by the police or someone else during the actual day.... He thought he would be killed after the bombing."

It's widely reported that traumatized survivors of the massacre screamed "Why didn't you come earlier?" when police finally did arrive on Utoya, 58 minutes after they say they received the first notification that an armed madman was on the loose.

But these anguished cries are among very few early outbursts of anger by Norwegians against law enforcement.

Many of us watching the horrific events from afar have been far more incredulous than those closest to it: How could it have taken an hour to stop this sick rampage? Whose fault is that? With such an unfathomable loss of life -- more than one-and-a-half times the toll of the 9/11 attacks on America, in proportion to the population -- why aren't the Norwegians more angry? Why has no one resigned over this?

The answer is simple and complex at the same time: Because this is Norway and they are Norwegians.

This is a country blessed with significant natural wealth in the form of oil. It has used that wealth to provide what is by most global indices the highest standard of living in the world. While there has long been increasing anti-immigrant sentiment, and many asylum-seekers and other foreigners say they are not made to feel welcome, the tension has not boiled over into outright social conflict. The country has not previously experienced significant acts of terrorism, nor even of public violence. Norwegians have every indication their public officials are doing a magnificent job protecting citizens.

With a population of about 4.9 million, just as most Norwegians have a connection to a victim, they also have a connection to a member of government or law enforcement. When Norwegian officials swear they did everything they could the best that they could -- as Oslo Police Chief of Staff Johan Fredriksen did when he said "You can't expect a better response" --Norwegians trust that it is true.

That esteem doesn't appear to be affected by the police's own recounting of the decisions, such as not to call in the solitary national helicopter (which only seats four anyway) or to try to find another one -- Norwegian TV booked one and flew over the island and took video of Breivik's attack before police arrived. The police also overloaded a boat trying to get to Utoya so it took on too much water and stalled.

Both children under attack and their parents tried to get through to police to tell them what was happening on the island, but say their information was not taken seriously. Some say they were told not to call unless it involved the downtown explosion.

But even as Prime Minister Jens Stoltenberg on Wednesday set up the independent "22 July Commission" to look into the procedures and practices, he made sure to emphasize that this is "not a critical inquiry; we have a lot of respect for the way that our authorities and our different agencies have handled the operations."

Bente Kalsnes, a communications advisor at Norwegian technology company Origo.no, who is active in the blogosphere, isn't surprised that no one is searching for a scapegoat. "I don't get the sense that people are getting mad," she said. "Rather even more sad as the names and ages of the people killed at Utoya are made public. However, there will eventually be more questions about details of the police and rescue operations, but it still feels a bit early."

Cristina Gallach, a longtime European Union official from Spain, believes the citizens of most other countries would not be so patient. "If this had happened somewhere else, criticism against the leaders would have skyrocketed," she said, noting that after Spain's terrorist attacks in March 2004, the incumbent government lost elections, primarily due to its behavior after the loss of 191 people. Prime Minister Jose Maria Aznar had blamed the violence on the Basque Separatist group ETA even when evidence pointed to Al Qaeda.

Gallach said the degree of solidarity in Norwegian society may be almost unique in Europe, both because the nation has never been attacked except in wartime and because "while people pay a lot of taxes, they feel well-protected and that their institutions are trustworthy."

Nevertheless, Kalsnes said she believes there will be changes in the way police train -- and are funded -- to prepare for scenarios like this. "It is of course not okay that the police couldn't get there before, as they could have saved more lives if they had arrived earlier."

Norwegian newspaper Verdens Gang released part of a transcript of text messages between 16-year-old Julie Bremnes and her mother, as the teen hid from Breivik among the rocks on the Utoya coast. "Tell the police they must be quick!" she wrote at 5:42 p.m., 42 minutes after Breivik had landed. "People are dying here!"

Any mother would want to sound calm for her daughter under such circumstances, and Marianne Bremnes made an assumption based on what she was seeing on the news. "The police are on their way," she wrote back. "It is going well, Julie."

It would be 45 more minutes before police reached Breivik, who dropped his weapons and put his hands up. Julie Bremnes survived. But will Norwegian mothers ever be able to reassure their children quite so confidently again?