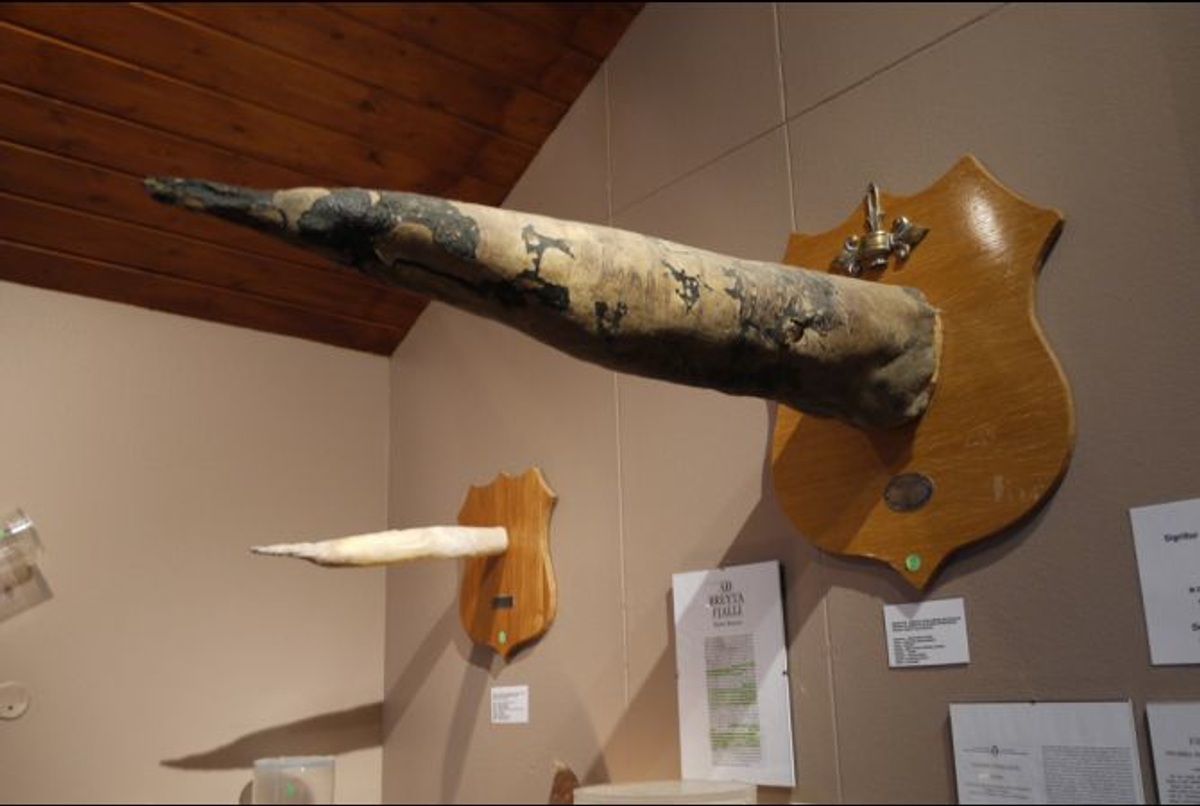 HUSAVIK, Iceland -- Three years ago when a local fisherman found a dead walrus on his property, he cut off its penis and called Sigurdur Hjartarson.

"I've taken it off. Do you want it?" he asked, figuring Hjartarson, the curator of the phallological museum located conveniently a few miles away, might be interested in the genitals of what he described as an extremely old, two ton walrus.

Hjartarson was thrilled. His Icelandic Phallological Museum, which houses the world's largest collection of penises and penile parts, had scored another valuable specimen.

To own the private parts of every male mammal living in Iceland, you see -- a goal he set for himself years ago -- Hjartarson needed a walrus, an animal that's becoming rarer every year.

"Collecting penises is like collecting anything. You can never stop, you can never catch up, you can always get a new one, a better one," Hjartarson said as he reached into the museum's penis-shaped cash register to return some change to a customer, before picking up a phone of the same shape.

The interior of this Icelandic museum or "phalloteca," as Hjartarson likes to call it, looks like a sinister setting for some morbid bachelorette party. Even the lampshades, which aren't made to look like penises, are made from bull and lamb scrotum.

"You know, collectors. They can get a little obsessed," Hjartarson explained.

What's left of the walrus today lolls in the museum, pickled like a giant ginger root inside a glass cylinder that's been custom-made to accommodate the impressive piece. It bears the caption: "Member 100 cm [39 inches], penis bone 62 cm [24 inches] with both testicles. In formalin."

While the walrus is Hjartarson's favorite piece, it's not nearly the largest specimen in the phalloteca. That honor belongs to a sperm whale and its intimidating, six foot-long penis.

"This isn't even the whole thing," said Hjartarson, explaining that after a whale dies two-thirds of its penis leaks out. He estimates that a sperm whale penis in its entirety is 13 feet in length, and weighs nearly 800 pounds -- impressive credentials for an animal who gets to use it once a year, at best.

But not all of the penis specimens on display in Husavik are so frighteningly large. That's especially true for the organ filed under the code "D15b."

This one belonged to a human male, a renowned womanizer named Pall Arason who died in January at the age of 95 after claiming to have bedded 296 women (he kept a "gentlemen's scorecard," naturally).

In 1996, Arason agreed to have his penis donated to the museum after his death. He kept his word, although right before he passed away he regretted it had "shriveled embarrassingly" in the last years.

Today the specimen, hair and all, sits among the smaller mammal pieces -- rats, rabbits and hamsters whose bits, humiliatingly enough, come with a magnifying glass -- in the transparent case with the caption: "Homo Sapiens Sapiens. Member whole, with scrotum and both testicles. In formalin."

Every year 11,000 visitors make the trek to the northeast of Iceland to this small fishing village about a 6-hour drive from Reykjavik, to see the museum's 276 penile pieces.

The majority are from local species, but Hjartarson is also cultivating an international section.

"This is it, 37 years of collecting penises. Somebody had to do it," said Hjartarson, pointing to the walls and cabinets full of stuffed, pickled and dried penises, or -- in the case of a 1988 bull -- "salted, dried and made into a walking stick."

Hjartarson describes himself as a dull, conventional person. "I'm a family man," he said.

His wife and four children support his hobby and treat it largely as harmless eccentricity. This year, Hjartarson is retiring from being a phallologist and his only son will take over the museum business, which only broke even last year.

The phalloteca idea started as a joke in 1974, with four dried bull penises, which Hjartarson got from a friend. Back then a dried bull's penis, the so-called pizzle, was used as a whip for animals.

"I kept one and gave the other three away to friends as Christmas presents," he said.

That one piece was enough to give him a reputation. At that time, Hjartarson was living in the small port town of Akranes where he was a headmaster in a secondary school.

"Some of my teachers worked in the summer in a nearby whaling station and they started bringing me whale penises, supposedly to tease me," he said. "Then, the idea came gradually that it might be interesting to collect specimens from more mammalian species."

But the Icelandic Phallological Museum in Husavik might say more about Iceland's sexual culture and mores than it does about Hjartarson's hobby.

Not long ago a museum like this in Iceland would have been unthinkable claims Sigurjon Hafsteinsson, an anthropologist and assistant professor at the University of Iceland.

"In the early 1990s the neoliberal government introduced an emphasis on entertainment, creativity, tourism, et cetera, which enabled new ideas to emerge publicly," he said. "This, and more, enabled the phallological museum to emerge and thrive."

Hafsteinsson is currently exploring phallology and what he calls "Icelanders' exceptionalism" in a book he is writing on the subject.