Momentum for the 14th Amendment solution?

UPDATED: A deal between Obama and GOP leaders may be taking shape. But Democrats may not like the terms... 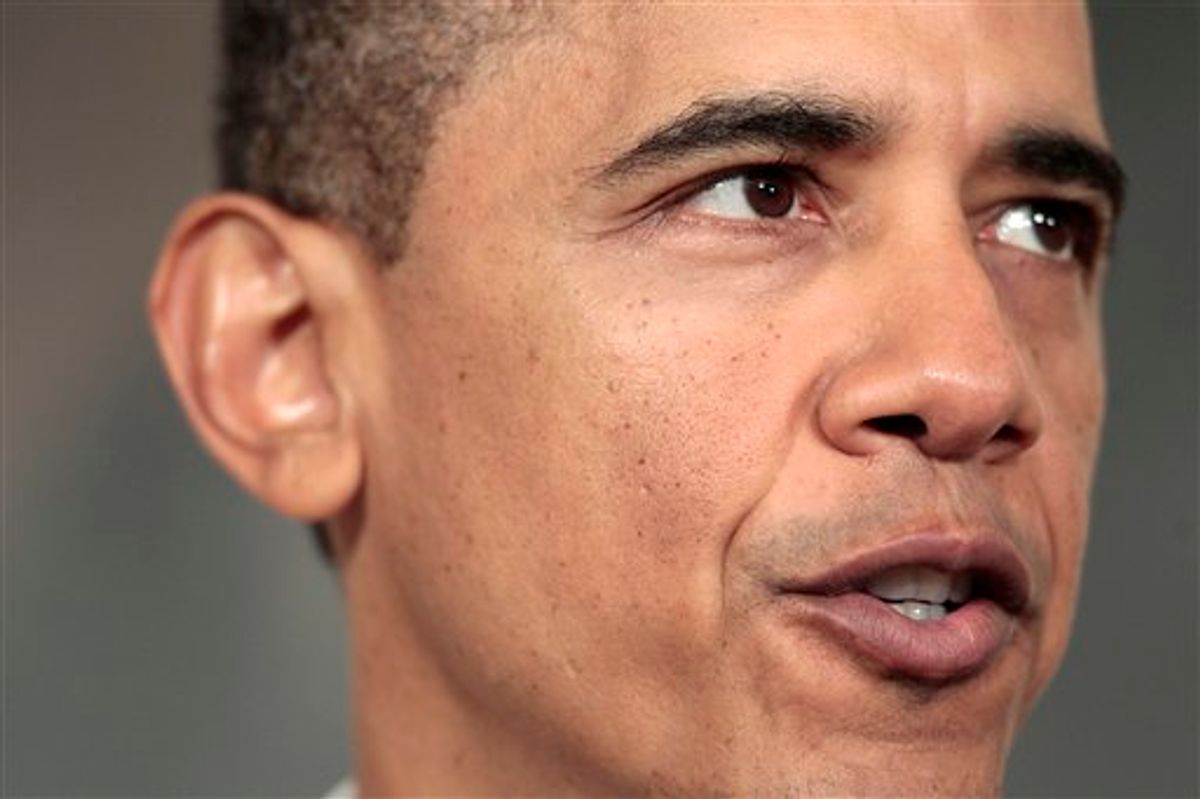 To be clear, there is still no sign that President Obama is entertaining even the theoretical possibility of invoking the 14th Amendment as a way out of the debt ceiling mess. But Saturday’s developments made the case for doing so that much stronger.

Sure, the day ended with a potentially constructive development, word that the White House and Mitch McConnell, the GOP Senate leader, are now trying to draw up a plan that could attract bipartisan majorities in both the Senate and the House. Those negotiations were the reason that Majority Leader Harry Reid decided late Saturday night to postpone a vote he had scheduled for 1 a.m. on his own plan, which seemed destined to be killed by a Republican filibuster.

But the evening also produced ominous signs that the talks with McConnell are likely to hit a dead end.

The basic issue, it would appear, is over the idea of creating a special committee to make specific recommendations for $1.8 trillion in deficit reduction. The Tea Party-friendly plan that John Boehner pushed through the House on Friday (and that the Senate immediately tabled) would prohibit the debt ceiling from being raised again several months from now if the committee’s recommendations weren’t adopted. The negotiations with McConnell apparently involve devising a different enforcement mechanism -- a trigger that would automatically implement deficit reduction actions if the committee’s plan were to die.

It’s not hard to see the problem here. Obama and his fellow Democrats want any trigger to include a revenue component; otherwise, if the automatic deficit reduction were based only on across-the-board spending cuts that Republicans want anyway, the GOP would have a strong incentive to sit on its hands and let the committee fail, rather than compromising with Democrats.

But if there is a revenue component to the trigger, how would Republicans react? Don’t forget, any deal that passes the Senate has to go back to the House, where the GOP rank-and-file is particularly gripped by anti-tax fervor. The very modest revenue increases -- more than balanced out by drastic spending reductions and cuts to Social Security and Medicare -- that were part of the “grand bargain” that Boehner tried to strike with Obama were greeted with hostility by GOP House members. And Boehner made it clear on Saturday that any plan that comes back to the House from the Senate will have to attract support from a majority of the GOP conference for him to support it (lest he face a mutiny). It’s hard to imagine a trigger with a revenue component doing this.

Another potential stumbling block, according to a report from Talking Points Memo, involves Social Security, with the GOP apparently floating the idea of adjusting the formula for calculating inflation -- essentially, a way of reducing cost-of-living increases for beneficiaries.

In other words, it seems clear that anything that even remotely smacks of a tax increase -- even in the form of a trigger -- will not pass muster with the majority of House Republicans, even if McConnell and the bulk of GOP senators are OK with it (and it’s not at all clear they are). And it seems equally clear that a plan that doesn’t include a serious enforcement mechanism for a deficit reduction committee will also not pass muster with these same Republicans. They want a guarantee of nearly $2 trillion in additional deficit reduction in the coming months, all of it on the spending side. And apparently Social Security is now in the mix.

No wonder several Democratic senators took the floor on Saturday and argued that Obama should simply cite the 14th Amendment, which requires that the federal government meet all of its financial obligations, and order the Treasury to keep paying the bills even when the debt ceiling is reached next week.

There was also a report Saturday night that House Minority Leader Nancy Pelosi privately favors this approach. Steny Hoyer, the No. 2 Democrat in the House, has publicly said that Obama should consider it, as has Bill Clinton.

The risks for Obama in doing this would, obviously, be enormous. But at what point does the price of the GOP’s demands make it a chance worth taking?

UPDATE: Sure enough, almost as soon as this was published, reports began emerging that Obama and GOP congressional leaders have struck a tentative deal. According to ABC News' Jonathan Karl, this is the framework:

National Journal's Major Garrett is reporting something similar. The most notable thing about this blueprint is that there is no mention of revenues. Sure, the special committee could potentially look at taxes, but the threat of across-the-board spending cuts (with Medicare on the table) doesn't seem like it would discourage Republicans from sitting on their hands if they don't like the demands of Democrats on the committee. And as TPM's Susan Crabtree noted earlier, defense spending probably isn't that sacred to Tea Party-era Republicans.

So if these reports are real, it could potentially pass muster with the House GOP. But there doesn't seem to be much in here for Democrats to like -- and there's a lot for them to be worried about. They probably wish Obama would just invoke the 14th Amendment, but if these reports are true, then Saturday may actually have been the day when momentum for that solution died.