The celebrated channel will now air in New York, but still can't get national distribution 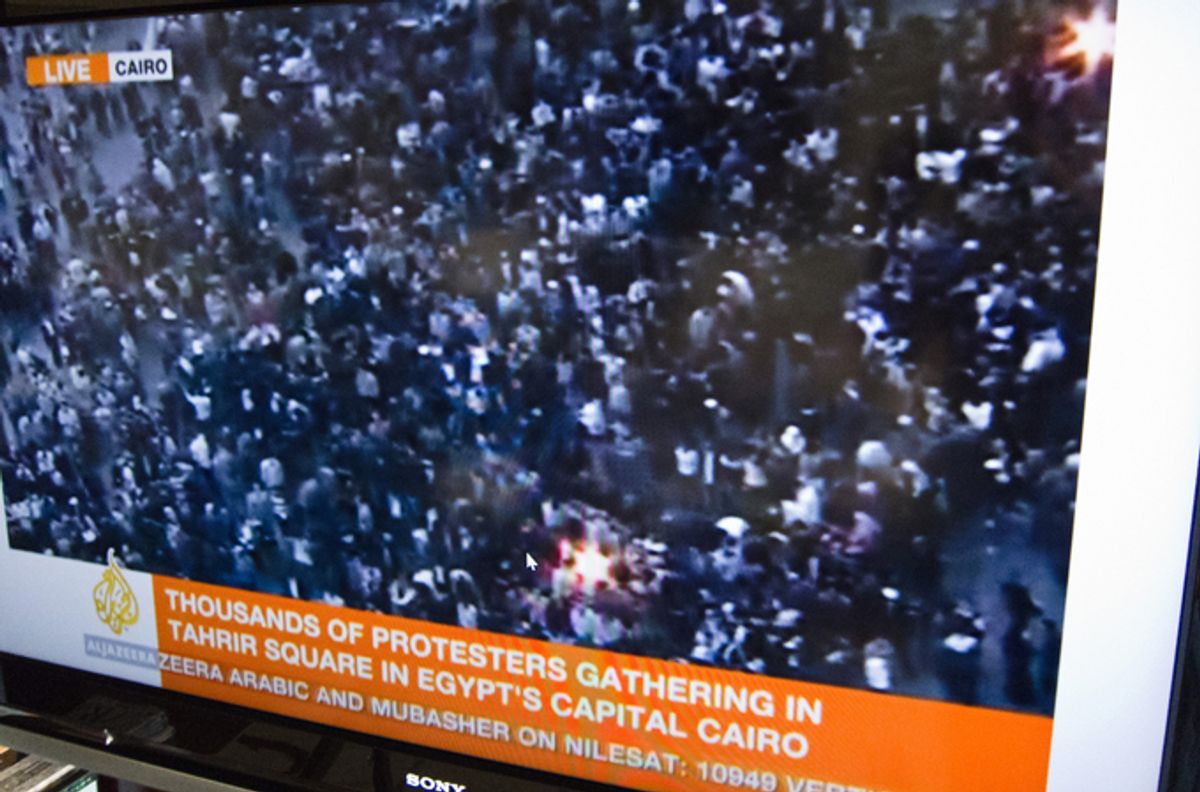 ... one of them is 24 hour news and the inanity it broadcasts across the political spectrum. You just can't talk that long without scrambling for things to say, and eventually something really dumb will come out. Which is why it really irritates me that, since Tuesday, I've been glued to various 24 hour outlets watching the demonstrations in Egypt. I spent my junior year of college at the American University in Cairo, and I've been engaged in a love affair with the country and its people ever since. I'm scheduled to go again in March (fingers crossed), and the thought of being able to visit a free country for the first time fills me with hope. ØªØ­ÙØ§ ÙØµØ±! Long live Egypt! (Christopher Rose)
--

In January, Jeff Jarvis wrote a brief opinion piece on the Huffington Post:

His comments echoed the sentiments of thousands of Americans avidly following the Arab Spring uprisings, who accounted for 60 percent of Al Jazeera's massive online traffic at the time, but who couldn't get the network on their television sets.

Six months later, to some extent, Jarvis' demand has been fulfilled. Starting Monday, Al Jazeera English (AJE) will be carried in New York City for the first time, by subletting air space from cable channel RISE to provide 23-hours-a-day coverage. This is a major, long-deserved inroad for a channel previously unable to gain purchase in the major U.S. cable system.

Up until now, AJE -- the English language sister channel of a popular Arabic satellite news network -- has been available only in small pockets of the country: a few satellite networks and cable channels in Toledo, Ohio, Burlington, Vt. and Washington, D.C.. Progressive, Berkeley-based Pacifica Radio became the first U.S. radio network to carry AJE last December.

"We will get on in the U.S.," Al Anstey, the channel’s managing director, told the New York Times' Brian Stelter. And although Secretary of State Hillary Clinton praised AJE for providing "real news" of a quality that exceeds that of American news networks, and although its website has become the unparalleled go-to spot for updates on the Arab uprisings, national U.S. television distribution still eludes the network.

One major network distributor, Cox, told Stelter that reasons for not carrying AJE were more about business than politics: "The incremental value of adding one channel to the hundreds in our lineup rarely offsets the broader challenges of rising programming costs and bandwidth management."

However, some point to political reasons for the Al Jazeera blackout in this country: residue from the Bush administration's characterization of the network as anti-American. "In 2006, pre-Obama, the experience was a challenging one. Essentially this was a period when a lot of negative stereotypes were associated with Al Jazeera. The effort was a difficult one," Tony Burman, head of North American strategies for Al Jazeera English, told the Huffington Post earlier this year.

The negative stereotyping has, however, largely died down according to the network's executives pushing U.S. expansion.

Nonetheless, AJE's slow progress onto United States screens, for some, is still underpinned by an American discomfort with the network's position and modes of reporting. Paige Austin, a former associate producer for Al Jazeera English in Doha, wrote about U.S. cable's refusal to carry the station in a 2010 paper for Harvard's John F. Kennedy School of government [via HuffPo]:

So why has Al Jazeera English found it so difficult to gain a foothold in the United States? One reason is a perceived lack of audience; the network is not typical American television fare, and cable operators doubt many Americans would embrace the change. During the two years I worked at Al Jazeera English, I was continually amazed by the channel's inversion of conventional U.S. news values -- in particular, its willingness to convey suffering in the developing world... in graphic detail. Far from conspiracy or manipulation, as critics charge, this use of evocative imagery is the natural result of a dynamic process meant to translate news into what Bruce Shapiro, director of the Dart Center on Journalism and Trauma, calls "the visual language of a particular culture."…[Meanwhile] it is well documented that when it comes to war and tragedy abroad, the American media's tendency is to sanitize violence, showing none of the outrage and carnage evident in media accounts outside the United States.

Given Austin's analysis, AJE's unsanitized presentation of "real news" will no doubt be a welcome change for New York's cable news viewers.