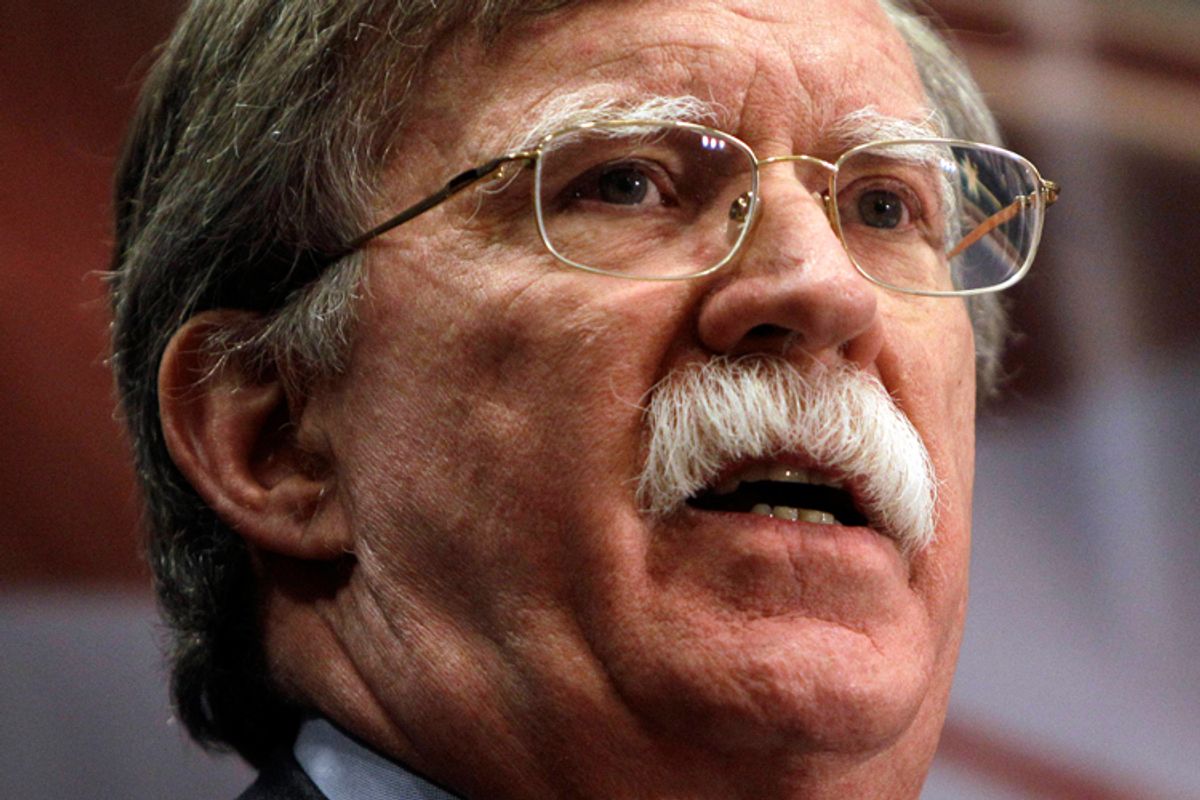 Guess who doesn't like the debt ceiling deal? Well, everyone in the country besides Mitch McConnell and the White House Communications Office, but also the single most important candidate of the 2012 election: John Bolton. You can find Bolton's reaction at the online home of all things John Bolton, The Weekly Standard, where it appears that BIll Kristol was the only person to notice and post the "thoughtful statement" from the nation's single most mustachioed fringe candidate.

Bolton, the former U.N. envoy too war-loving even for the Bush administration (they sent him to the U.N. purely because appointing a psychopath ambassador was a good way to prove their utter contempt for the institution), is concerned that the deal could hypothetically involve defense budget spending reductions "as much as three percent below" our current $700 billion defense budget, which has grown by around 9% annually for a decade.

Depending on the outcome of further negotiations over the size and allocation of those reductions, these cuts alone may well be quite harmful. The best that can be said is that, for these fiscal years, the issue is still unresolved.

Will we be able to afford enough bombs to bomb Iran in this new austere future? Unclear at this time. (But probably, we usually find money for bombs.)

Pam Geller's dream-boyfriend is even more alarmed at the prospect of the "trigger cuts" to agency budgets that would happen if the super-congress can't agree on our second round of austerity measures. The Department of Defense could lose... less than $500 billion, over the course of ten years, beginning in 2013, unless another Congress does something about it, which another Congress obviously would, because Congress refuses to ever allow defense budget cuts!

Defense spending is not just another wasteful government program. Subjecting it to potentially massive, debilitating cuts is rolling the dice in perilous times internationally. Adam Smith himself wrote in The Wealth of Nations, “the first duty of the sovereign” is “protecting the society from the violence and invasion” of others.

Adam Smith says we need a trillion-dollar defense budget, you say? Who am I to argue with the inventor of American capitalism!

Hah, wait, there is one other person who takes Bolton seriously, apparently: Jennifer Rubin, the Washington Post blogger. Fiscal conservatism is well and good, but endless war forever against the vast Muslim menace is the real priority. (Al Qaeda might attack Norway again, right, Jennifer?)

(Mitt Romney also doesn't like the deal but that's only because he's trying to be the first 2012er to come out forcefully against it.)