What we wish Obama had said

Imagining a very different presidency, one in which Obama isn't scared to speak in clear and urgent moral terms 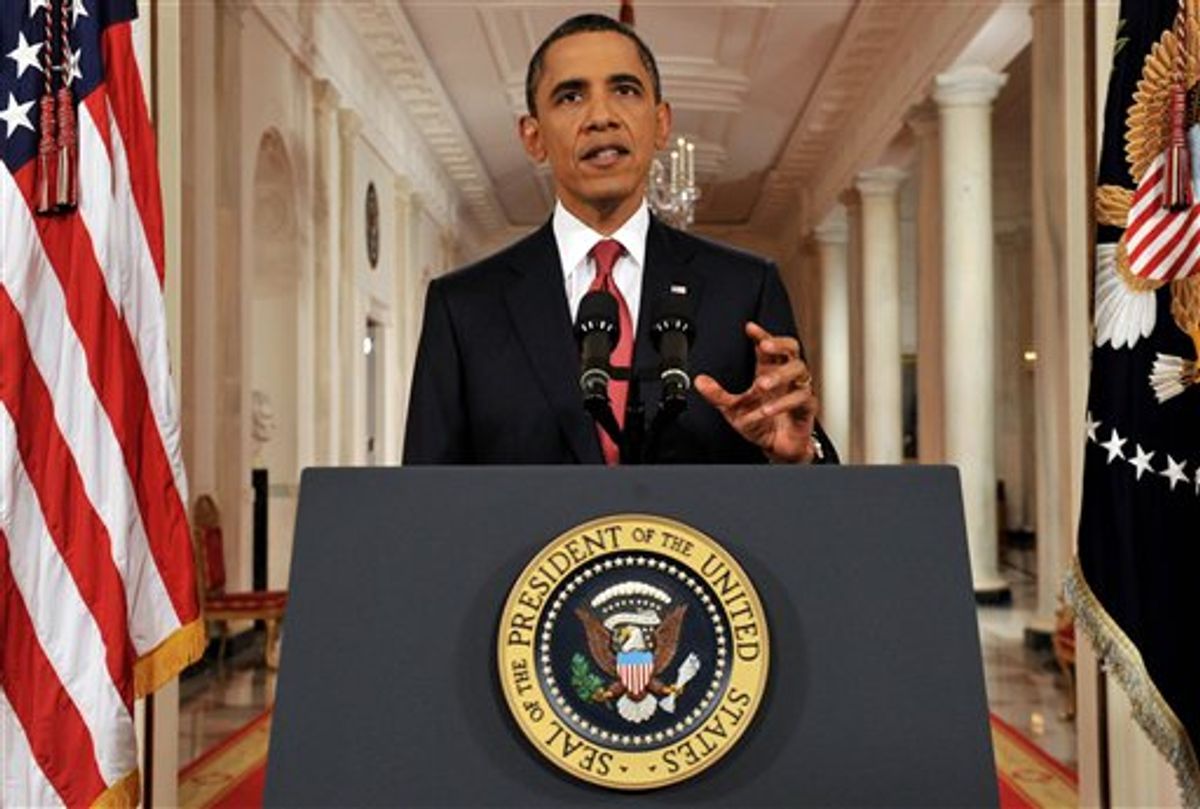 Does anyone else have a sick sense of déjà vu this morning?

After months of slow-motion capitulation, President Obama has cut an eleventh-hour deal with Republican leaders to raise the debt ceiling. After vowing to heed the public outcry for a balanced approach, he has instead consented to a plan that manages to run rough-shod over the poor and middle-class, coddles those who caused the recession, imperils the government’s two most popular entitlement programs, and virtually guarantees that our economy will continue to falter.

In other words, just another day at the office for our 44th president.

I have no doubt that Barack Obama wants to do right by the country, and that he genuinely believes giving in to every Republican demand (and then some) is his only play. But to me, the debt deal proves once and for all that Obama lacks the courage to lead effectively. The evidence resides not just in his policies, but in his words.

To put it bluntly: every time Obama opens his mouth, what comes out is a bloodless, abstract drone. The central failure of his presidency has been one of rhetoric. In the interest of appearing reasonable, he comes across as feckless and pliant, a weak man who can't (or won't) speak in the urgent moral terms his historical moment demands.

Instead, he has ceded the national conversation to his "Republican friends," who learned long ago that the media will slavishly transcribe and trumpet the most inflammatory jibe uttered each day, whether it contains even a grain of truth.

And thus, around my house -- as in progressive households across the country -- we have taken up a sad little parlor game called What We Wish Obama Had Said. I’m pretty sure you know the rules already…

It is absolutely true that we can't depend on government alone to create jobs or economic growth. That is and must be the role of the private sector. But at this particular moment, with the private sector so weakened by this recession, the federal government is the only entity left with the resources to jolt our economy back into life.

For eight years, the GOP did the loyal bidding of their corporate sponsors. They sucked hard-earned cash from the pockets of working Americans and funneled it to the gambling addicts of Wall Street, who, in turn, trashed the economy and left millions out of work. It’s now my job to clean up their mess. Until such a time as the private sector grows a set of balls – and a conscience – the government will have to help. To those Republicans now whining about excess spending: You had your shot. You blew it. Unless you’d care to explain why you spent the taxpayers' money like a drunk frat boy at a Las Vegas whorehouse, shut the fuck up and get out of the way.

Now is when we must bring the best ideas of both parties together, and show the American people that we can still do what we were sent here to do. Now is the time to deliver on health care.

The reason our healthcare system is broken is because we’ve put corporations in charge of curing the sick. Period. Your illness -- or that of your child -- isn’t a moral burden to insurance companies. It’s a financial opportunity. Which is why they keep jacking up your premiums while paying millions to their CEOs and lobbyists. The fundamental mission of the modern conservative movement is to get people to blame the government for their problems, so corporations can go on fleecing them. Conservatives can’t stand Medicare precisely because it proves that the government does a better job of providing medical care people than corporations. They are right to be terrified about a government takeover of health care. If our nation finds a cheaper and more compassionate path to healing, some of their biggest donors will be put out of business.

Extending the Bush tax cuts for the wealthy

I’m as opposed to the high-end tax cuts today as I’ve been for years. In the long run, we simply can’t afford them. And when they expire in two years, I will fight to end them, just as I suspect the Republican Party may fight to end the middle-class tax cuts that I’ve championed and that they’ve opposed.

Under President Dwight Eisenhower, the top marginal tax rate was 91 percent. The rich chose to reinvest in the economy. They built more factories and hired more workers. As a result, our nation enjoyed its greatest boom. Our wealthiest citizens now pay 35 percent of their income, much of which they hide. Americans are not stupid. They can follow the money. Choosing to hand a billionaire donor a tax break, while thousands of children go to bed hungry represents a triumph of senseless greed over common decency. The advocates of such cruelty should disgust any true Christian.

I believe in the power of the free market. I believe in a strong financial sector that helps people to raise capital and get loans and invest their savings. That’s part of what has made America what it is.

There is no such thing as a free market. The powerful will always find a way to game the system. They host fundraisers and hire lobbyists and set up fake grassroots organizations. They spend what they need to spend to keep government from meddling in their given racket. The absence of regulation on Wall Street tanked our economy. Any elected official who opposes its reform is either a fool or on the take. Or both.

Under Secretary Napolitano's leadership, we have strengthened border security beyond what many believed was possible. They wanted more agents on the border. Well, we now have more boots on the ground on the southwest border than at any time in our history.

It’s hard for me to understand why Americans living hundreds miles from the U.S. border would devote so much fear and paranoia to undocumented workers. Here’s my guess: because deep down most of these fat, white, racist pigs know that they’ve done almost nothing to earn their good fortune. They just lucked out. They hit the geographic lotto. And it drives them crazy to imagine people who still believe in the American Dream, who would die to reach this country, to take a shit job for shit pay, simply to make a better life for themselves and their family. It’s a sort of patriotism they’ll never experience.

I’ve met my commitments to the LGBT community. I know there are going to be times where you’re still frustrated with the pace of change. I understand that. I know I can count on you to let me know.

Sorry guys. I know I’ve been kind of dickhead about gay rights. It turns out homophobes are a real drag. I guess you knew that already. So let me say this, once and for all: If people want to get married, or serve in the armed forces, their sexual preference shouldn’t matter. In the face of an angry spouse, or an enemy combatant, what could it possibly matter who we choose to love? Love is love. War is war. Dumb bigotry is dumb bigotry.

Because neither party is blameless for the decisions that led to this problem, both parties have a responsibility to solve it. And over the last several months, that’s what we’ve been trying to do.

In eight short years, the Republicans ran up seven trillion dollars on the national credit card, funding two wars, a new Medicare program, and massive tax giveaways. For them to now wail and moan about our deficit isn’t just disingenuous. It's pathological. To quote Dick Cheney, "Reagan proved deficits don’t matter." Most Americans could care less about our national debt. They’ve got more important things to worry about, such as how to feed their families. If the deadbeats in this Congress don’t want to pay their bills, let me suggest that they not incur them. Lawmakers have two choices. They can send me a clean debt-ceiling bill. Or I’ll invoke this clause, from the 14th Amendment of the US Constitution: "The validity of the public debt of the United States … shall not be questioned." I’m done squabbling with demagogues and con men.