A bad weekend for the White House: The Tea Party wins, Democrats lose, and the carnage will be even worse next year 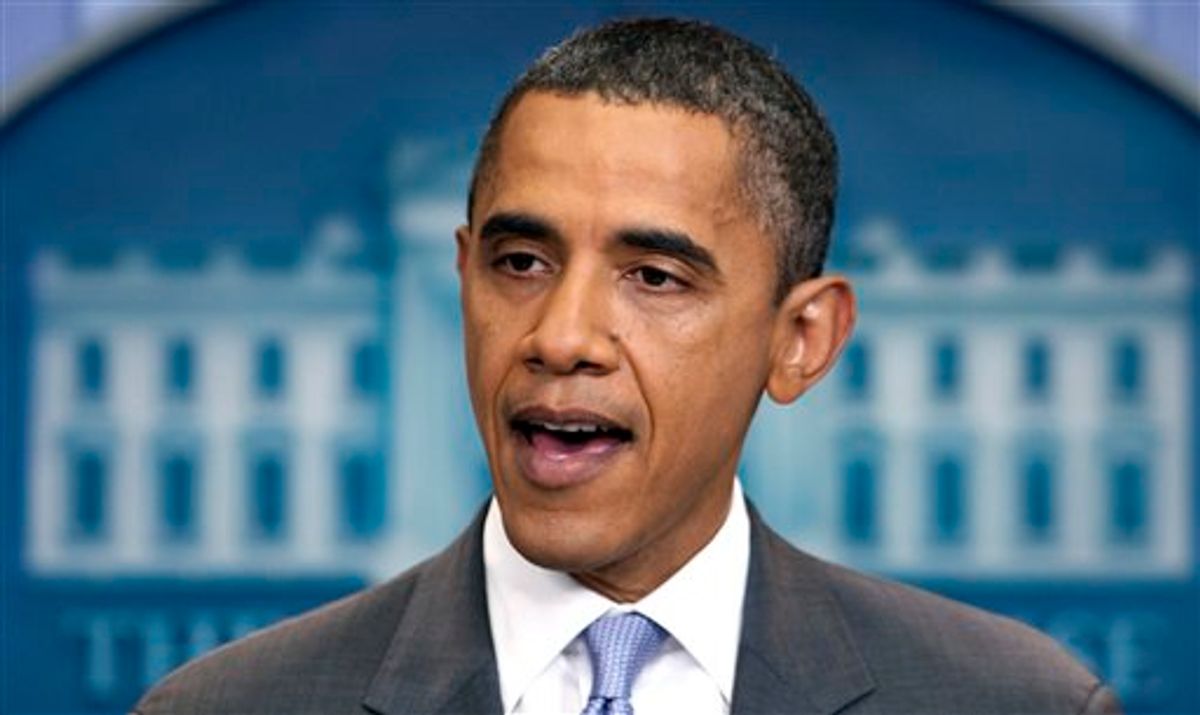 In the end, President Obama had to admit surrender. He tried to put a bold face on it, but there's no other way to interpret his remarks to the nation announcing that Congressional leaders had cut a deal to raise the debt ceiling.

The details of the deal are stark: at least $2.5 trillion in spending cuts over the next two years, a two-stage approach to raising the debt ceiling, and a new committee to recommend further cuts to entitlement programs, along with huge automatic spending cuts if Congress fails to institute that plan. As described, the deal is a major victory for Republicans that will further embolden them over the next 18 months, and may mortally wound Obama's chances of reelection.

The president told the nation that after ten years the United States would have "the lowest level of annual domestic spending since Dwight Eisenhower was President." He said this as if it was something to be proud of. The truth is, we are a far different nation today than we were in the 1950s. We have millions more citizens, and are undergoing a major demographic shift as the Baby Boomer generation ages. With health care costs continuing to rise, the squeeze will be on. People will suffer.

The president stated that "I've said from the beginning that the ultimate solution to our deficit problem must be balanced." And yes, Obama has long maintained that revenue increases that would partially balance out any cuts to entitlement programs must be part of any deal. But there are no revenue increases in this deal. And it is surely a pipe dream to imagine that Democrats will be able to include any new revenue increases in further negotiations. After what we've seen so far, first in the government shutdown drama and now in the debt ceiling fight -- when Republicans hold firm, Democrats give in. The pattern has been set.

Over the last few months, the president also told the American people, again and again, that he wanted a hike in the debt ceiling that would extend to 2013. He wanted, justifiably, to avoid another hostage situation that would bring normal government business to a halt and distract us from more pressing priorities. But the deal he has agreed to ensures that we will be fighting this same battle all over again next year, in the middle of a campaign season. From what we know of the deal, it doesn't sound like Republicans will be able to hold the debt ceiling hostage 2012 in exactly the same fashion as they did this year -- the new plan appears to incorporate Senator Mitch McConnell's "vote of disapproval" gimmick for the next stage -- but the triggers that will enforce automatic spending cuts if Congress fails to cut entitlements make that point moot. The gun is still to White House's head. Medicare will be on a bipartisan chopping block.

The new deal, so far as had been described on Sunday, also included no measures to stimulate an economy that may be sliding back into recession. Obama claimed that "We also made sure that these cuts wouldn't happen so abruptly that they'd be a drag on a fragile economy," but there will almost certainly be some reductions in spending that kick in during the next fiscal year that will pile dangerously high on top of the cuts already instituted this year. If a double-dip recession is looming, these cuts will further constrict economic growth.

If one wished to give the president the benefit of the doubt, one could argue that maybe there was nothing he could have done to get a better deal. House Republicans were willing to push the nation into default -- and that's a scenario no sane leader could responsibly endorse. Obama couldn't credibly threaten a veto of any legislation that would reach his desk because Obama ultimately would not and could not voluntarily choose to default on the nation's obligations. Obama had to choose between an awful deal or an outright catastrophe. There's no way to come out of that jam smelling of roses.

But he didn't need to try to sell this resolution as some sort of "compromise." The president said it was not "the deal I would have preferred." He should have been stronger. He should have said it's a bad deal that does not address the pressing needs of the nation, and sets in stone cuts in entitlements that will savage an aging population faced by spiraling health care costs. And then he should have acknowledged that he still had to sign it, because the alternative would have ensured a nearly immediate slide into recession and the strong possibility of a global financial shock.

All in all, the weekend's events represent a smashing victory for the Tea Party and a crushing defeat for Democrats -- and more of the same coming down the pike. But at least Congress will be able to recess on time next week. The deal -- and the damage -- is done.