Will Republicans ever give even an inch on taxes?

The White House claims its debt ceiling deal may finally force the GOP to budge. Have they heard of the Tea Party? 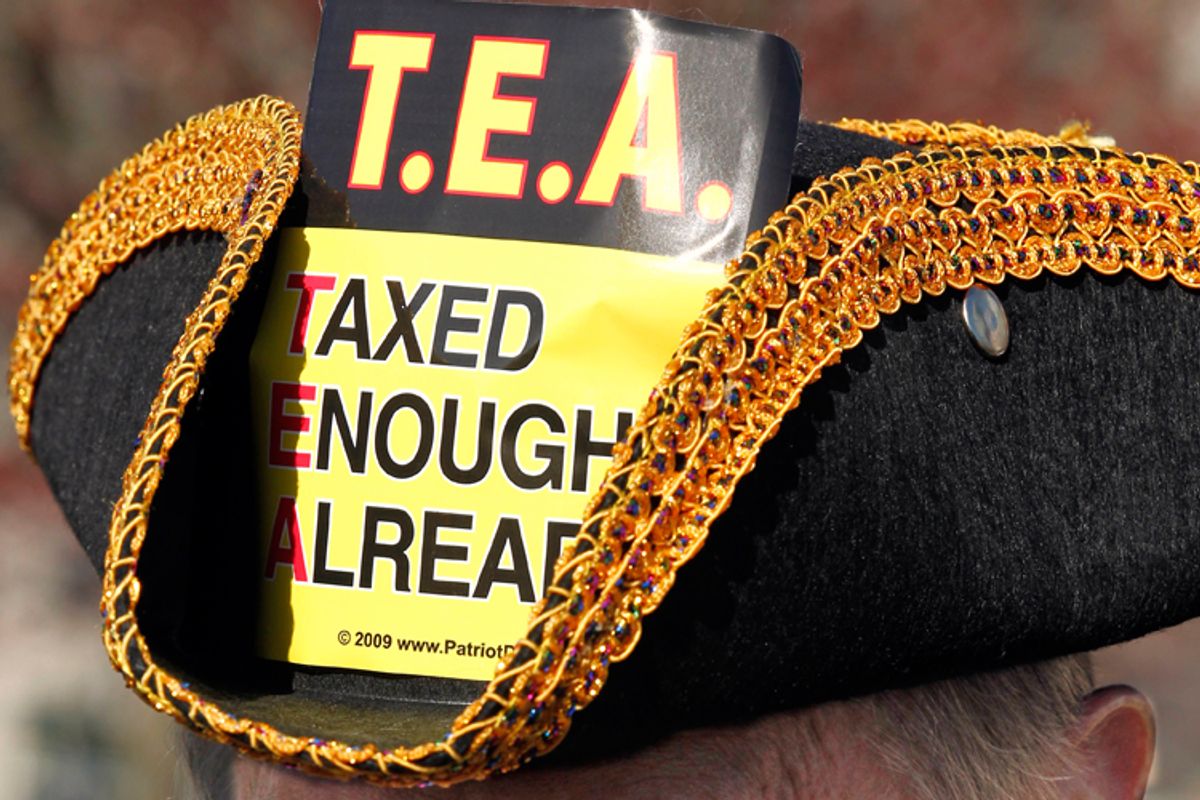 For understandable reasons, the White House is trying hard to convince progressives that the debt ceiling deal isn't nearly as bad as some are claiming  -- and that, upon closer inspection, there are actually some things to like about it. Such as:

The commission: Again, for all the liberal carping about a "Super Congress," the commission of 12 members -- three from each party in each chamber -- set up to find the second phase of $1.5 trillion in cuts by Thanksgiving is actually rigged to force some revenue increases. Yes, the Bush tax cuts are off the table. But there are plenty of loops holes, subsidies and other corporate welfare programs that are on the table. And with such a strong trigger, it’s hard to imagine at least one Republican not voting to kill corporate jet subsidies over slashing $500 billion from the defense budget -- even if the revenues aren’t offset. The question is: who are Republicans more afraid of, Grover Norquist or the joint chiefs? Democrats’ money is on the joint chiefs.

The idea here is that the joint House/Senate committee that (assuming the debt ceiling deal is ratified today) will soon be set up to recommend new deficit reduction steps will be a good venue for Democrats to pursue a "balanced" approach -- meaning one that includes spending cuts and revenue increases. The way the deal is structured, if the committee deadlocks or if Congress won't accept its blueprint, automatic cuts will be triggered -- including a reduction in Defense spending. This, supposedly, will force Pentagon-friendly Republicans to take Democratic demands for revenue adjustments more seriously.

I don't think I buy this, though. As usual, the problem has to do with the Tea Party, and its rigidly anti-anything-having-remotely-to-do-with-tax-increases orthodoxy. This sentiment, which animates the GOP's base and its most influential commentators, is shared by dozens of Republican House members. These are the members Speaker John Boehner had in mind when he backed out of "grand bargain" talks with President Obama, concluding that even slight revenue increases in the face of significant spending and entitlement cuts would be unacceptable to the GOP conference. These were also the members who were most difficult -- and in some cases impossible -- for Boehner to win over when he pushed through his own debt ceiling plan (on the second try) last week.

The important thing to remember about these Republicans is that, in general, defense spending isn't nearly as sacred to them as it has traditionally been to GOP leaders. For instance, here's what Mark Meckler, a leader of the national group Tea Party Patriots, told Politico last month:

"Everything is on the table. I have yet to hear anyone say, 'We can’t touch defense spending,' or any other issue. ... Any tea partier who says something else lacks integrity.”

In the same article, Georgia Rep. Paul Broun, perhaps the most Tea Party-friendly member of Congress, suggested he'd be OK with defense cuts, arguing that America "cannot be a protector of the whole world. We cannot do that any longer. We don’t have the money to do it anyway." (Broun was one of the Republicans who refused to vote with Boehner and the GOP leadership on the debt ceiling last week.) In other words, if the price of avoiding any kind of tax increase is a cut in Pentagon spending, it sounds like Broun would be fine with that.

I don't know precisely how widespread Broun's view is among his GOP colleagues, but if a substantial number of Republicans felt this way, then it's hard to imagine the deficit reduction committee changing anything when it comes to revenues. Boehner, if he were to push for the acceptance of a plan with tax increases, would still be faced with the prospect of alienating dozens of true believers who already view him with suspicion.

This isn't to say there aren't Republicans for whom the Defense budget matters greatly. California's Buck McKeon, the chairman of the Armed Services Committee, has been pushing all year to shield the military from any budget reductions. But McKeon, who's been in the House for two decades, isn't the kind of Republican Boehner has to worry about. The Tea Party purists are.

It's also worth remembering that a similar commission was set up when Ronald Reagan was president -- during the Cold War, in other words -- with similar rules. If the panel deadlocked or Congress ignored it, the Defense budget would take a whack. But even back then, when a strong national defense was perhaps the central point of agreement among all Republicans, Reagan and the GOP ended up signing off on a "balanced" plan that included Defense reductions.

If Republicans were willing to give in on Defense spending back then, it's hard to imagine they won't do so again now -- if the alternative is picking a fight with the utterly inflexible anti-tax zealots of the Tea Party. So no matter what the White House says, it's highly doubtful that the new deficit reduction committee will succeed here when every other device they've devised yet has failed. When it comes to increasing revenues, the best bet remains the end of 2012, when the Bush tax cuts are set to expire, and when Democrats -- if they want to -- will be able to force a rate hike simply by doing nothing,