Can a photograph still change the world?

NYT editor explains why the paper ran an unforgettable photo. But will it effect change? 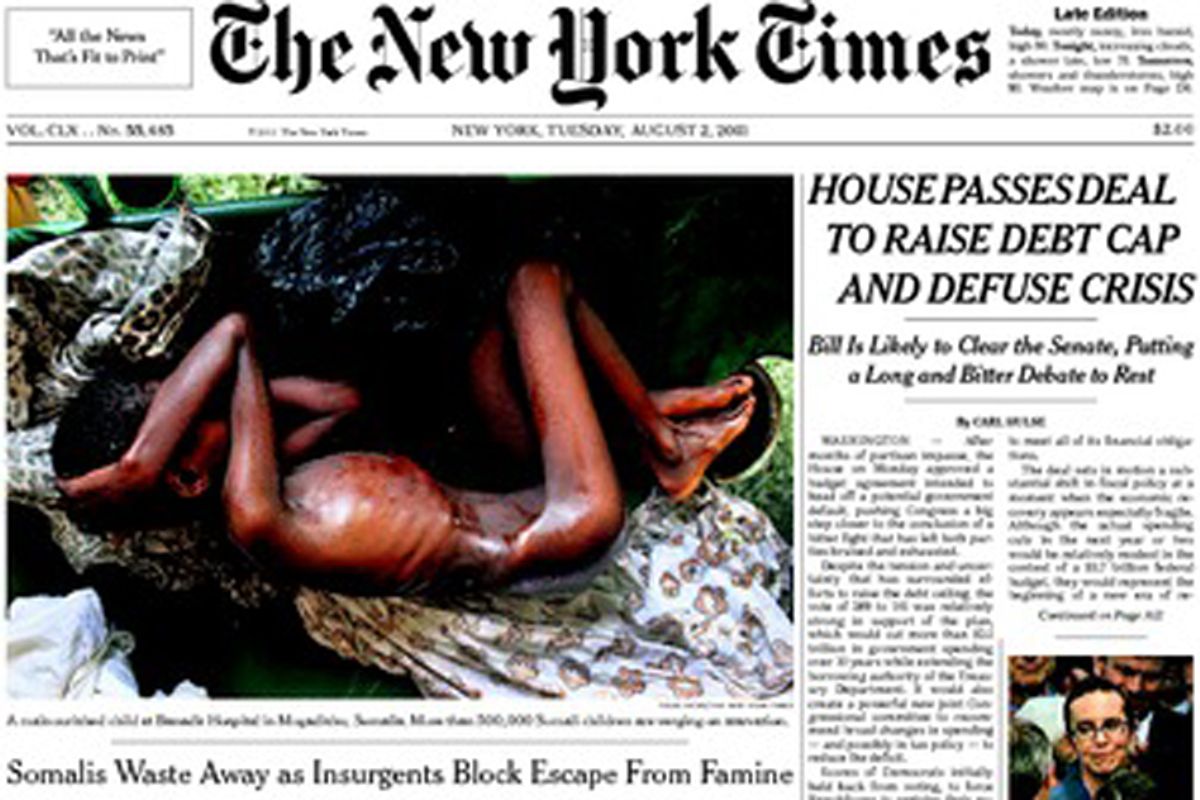 Readers of the New York Times this morning, whether in print or online, were perhaps shocked by the searing image of an emaciated Somali child, whose skin was wrapped so tightly around his body that the contours of a skeleton were clearly visible.

The accompanying story, written by Times reporter Jeffrey Gettleman, detailed a group of Somali insurgents accused both of blocking Western aid to the country, resulting in a severe famine, and of imprisoning refugees trying to flee to safety. Half a million Somali children are "on the verge of starvation," Gettleman reports. The photo itself -- by Times photographer Tyler Hicks and spread large across four columns on Page One -- was taken in Banadir Hospital, which Gettleman described as such:

Every morning, emaciated parents with emaciated children stagger into Banadir Hospital, a shell of a building with floors that stink of diesel fuel because that is all the nurses have to fight off the flies. Babies are dying because of the lack of equipment and medicine. Some get hooked up to adult-size intravenous drips -- pediatric versions are hard to find -- and their compromised bodies cannot handle the volume of fluid.

The image has generated its fair share of buzz today. And it raises some interesting questions about the enduring role (and value) of still photographs in the modern-media landscape:

Why did the Times run that photo?

The graphic quality of Hicks' photo certainly matches the stark portrait painted by Gettleman's reporting. And executive editor Bill Keller told Salon that the choice to feature the image so prominently was uncontroversial in the Times newsroom: "We'd already decided to front Jeffrey's powerful story, and it would have felt like journalistic malfeasance not to include Tyler's powerful photography," he said. "I know many readers found the picture disturbing. That's good. The deaths of thousands of Somali children ought to disturb us, at least."

Keller argued that the use of graphic photography does not equate to sensationalism: "We prize photographs that deserve and demand attention. Sometimes they do it with unusual composition, sometimes with wit or incongruity, and sometimes they do it by looking at death, hunger, disease or other misery close up."

The United Nations declared a famine in Somalia two weeks ago, but the story has largely been overshadowed here by the debt-ceiling debacle, the Norway massacre and allegations of phone hacking at a Rupert Murdoch tabloid. (The Atlantic Wire notes the disparities in coverage of all these stories in convenient graph form.) According to another Times story, which ran Monday, humanitarian groups have struggled to raise money for aid, in part because of the famine's limited media profile.

“I’m asking myself where is everybody and how loud do I have to yell and from what mountaintop,” said Caryl Stern, chief executive of the United States Fund for Unicef, a fund raising arm for the organization. “The overwhelming problem is that the American public is not seeing and feeling the urgency of this crisis.”

But is the photograph enough to change anything?

Some of modern history's most significant moments are writ large through iconic photographs. Try, for example, to imagine the Vietnam War without the self-immolation of Thich Quang Duc, or without the horrific reality shown through "Murder of a Vietcong by Saigon Police Chief." And photography has often brought new awareness to under-covered tragedies, as it does now for Somalia.

But one question that lingers over the Hicks photograph -- along with many others in a post-9/11, post-Abu Ghraib world -- is how much punch a singular image still packs. It's remarkably simple to avoid unpleasant images in the modern media landscape. You can imagine the number of people who simply gloss over stories showing servicemen and -women in fatigues, because of wariness toward depressing combat stories. And the media often operates in lockstep. As Al Jazeera veteran Paige Austin noted this week [via HuffPost]:

It is well documented that when it comes to war and tragedy abroad, the American media's tendency is to sanitize violence, showing none of the outrage and carnage evident in media accounts outside the United States.

Perhaps the attention generated by the Hicks photograph -- an arresting image that's hard to avoid if you've been anywhere near the Times today -- will help generate more attention for the atrocities in Somalia. It's certainly boosted awareness of the famine. But maybe we're attaching too much significance to a photograph on its own. More important is that people understand the story behind the picture, argues Susie Linfield, NYU professor and author of "The Cruel Radiance: Photography and Political Violence."

"One of the problems with an image is that it can't explain [context]. You can see a child starving, but you need the words to explain who is the culprit," which, in this case, was Somali militants. "[The Times piece] was a very effective combination of image and text."

The fate of the child from the photo is unclear. "[Gettleman and Hicks] said they were operating under tight constraints and weren't able to follow up on the extreme cases like the child in the photo," according to Keller. "They think the prognosis was not good."