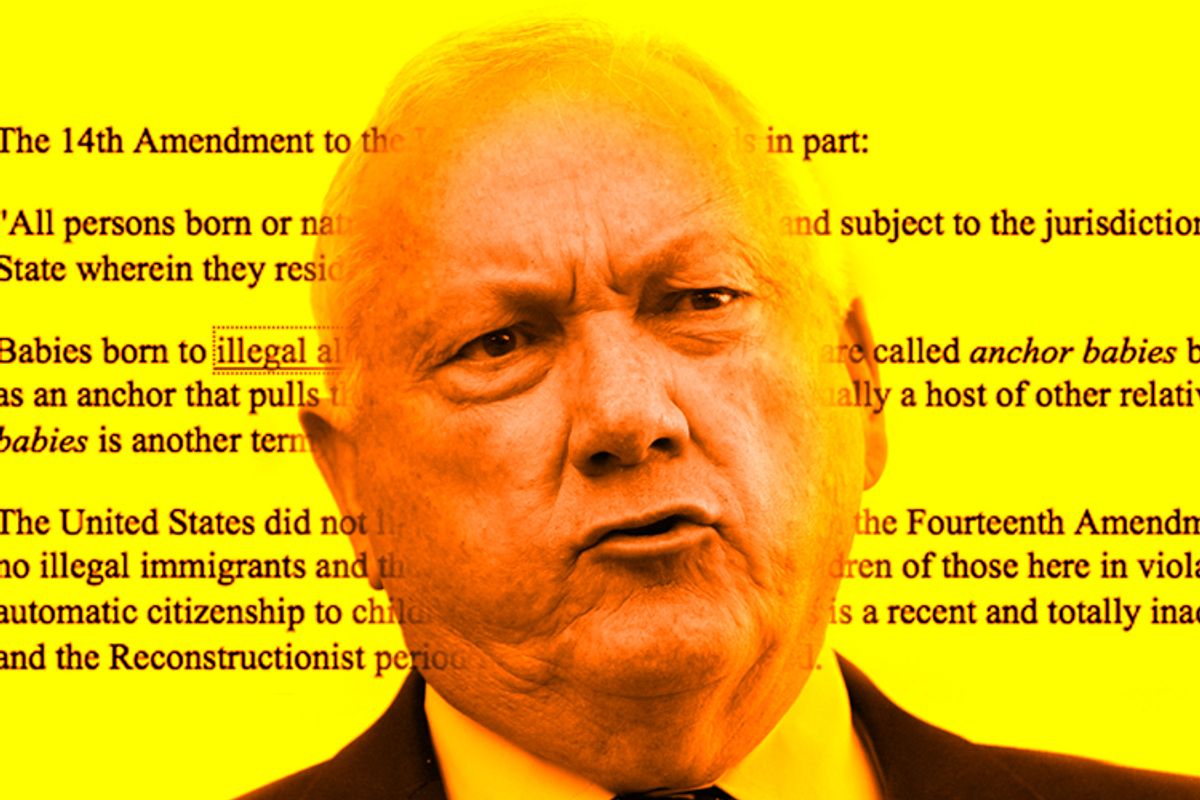 "Folks," he wrote, "if there was ever an argument for NO to raising the debt limit and YES to stop the reckless socialist spending in this Gangster Government in DC. Watch this video." Just one problem: The five-month-old viral video -- which was created by a far-right gadfly from Tacoma, Wash. -- had already been thoroughly debunked by the Tacoma News Tribune. By Sunday morning, Pearce had deleted the post from his Facebook site.

But this was hardly the first time that Pearce, whose ultraconservative immigration views have won him national attention and who will face a historic recall election in his Arizona district on Nov. 8, associates himself with the work of a fringe character.

For several years, media outlets in Arizona and at the national level have explored links between Pearce and extremist groups, and in 2006 he was caught circulating a Holocaust-denying article from a West Virginia-based white supremacist group. In issuing an apology, Pearce claimed to not have known about the National Alliance's views.

But a new examination of Pearce's website and public statements reveals that the self-proclaimed architect of Arizona's "papers please" immigration law has regularly borrowed significant portions of text from the writings of hard-line white nationalists, fringe anti-immigrant activists, and others whose views far fall outside the mainstream and presented them as his own.

In an Aug. 31, 2010, press release that chastised the Obama administration for including Arizona's SB 1070 law in a United Nations report on Human Rights, Pearce borrowed whole paragraphs from an essay that had been written in 2009 by Tim Baldwin, a prominent Constitution Party activist (and the son of Chuck Baldwin, who previously ran for president under the party's banner). Here is one of the passages that Pearce appears to have lifted without attribution:

Particular to the United States, the U.S. Constitution was voluntarily formed as a compact by existing sovereign states with existing state constitutions. Despite the deceptive proposition that the States were created by Congress, the States existed prior to and independent of any Congress, as confirmed by the Treaty of Paris in 1783 (which, by the way, was not overturned by any subsequent legal action of the states). The states authority is not delegated; it is inherent authority and has inherent responsibility to its citizens. "The State governments, by their original constitutions, are invested with complete sovereignty." Alexander Hamilton, FP 31. And, "Each State, in ratifying the constitution, is considered as a sovereign body, independent of all others, and only to be bound by its own voluntary act." James Madison, FP 39.

Pearce has done the same thing on his personal website. Under the tab for his three main constitutional issues -- "Birth Right," "14th Amendment," "Supreme Court Decisions" -- he borrows wholesale from the writings of Fred Elbel, an anti-immigrant extremist who has been linked to various white supremacist organizations. In a section on the "Original intent of the 14th Amendment, Pearce has reprinted a passage from Elbel's own site without any acknowledgment (save for an HTML link over a few of the words). Here's how it looks on Pearce's site: According to a Southern Poverty Law Center report in 2007, Elbel

"is, in effect, the house webmaster for the anti-immigration movement, having designed the websites of nativist groups including SUSPS (a group that now goes by its acronym only and which specifically aims to change Sierra Club population policy), Protect Arizona Now, the Colorado Alliance for Immigration Reform and several others (Protect Arizona now and the Colorado Alliance have had in their leadership a self-described 'white separatist' named Virginia Abernethy, a prominent member of the CCC and onetime close friend of Elbel."

Elbel displayed his temperament during the debate over the Sierra Club’s future in 2004, when he wrote an E-mail that read: "Damned right. I hate ’em all — negroes, wasps, spics, eskimos, jews, honkies, krauts, ruskies, ethopans, pakis, hunkies, pollocks and marxists; there are way too many of them." Elbel’s Defend Colorado Now, an anti-immigration group based in Lakewood, Colo., has received nearly $50,000 from Tanton’s U.S. Inc.

Pearce does the same thing in a section on "Supreme Court decisions": In the "Birth Right Citizenship" section, Pearce gives Elbel a break and instead lifts from a 2005 Phyllis Schlafly essay. Here's Pearce: Pearce's copy-and-paste habits apparently extend to more mainstream figures too. In the "Dear Fellow Patriots" letter on his homepage, Pearce uses an uncredited quote from "The Heart of Leadership," a motivational tome by Robert Staub:

Leadership, practiced at its best, is the art and science of calling to the hearts and minds of others. It is engaging others in an enterprise of sound strategic focus, where they can experience a sense of ownership, of making a difference, of being valued and adding value. That quote was also incorporated into the official biography used to promote Pearce's appearance at an upcoming conference: Pearce did not respond to efforts for comment on this story.

He is the first Arizona legislator ever to face a recall election. Calls for his ouster have come from both sides of the aisle, and a fellow Republican, Jerry Lewis, has already launched his campaign to oppose Pearce in the November vote. Pearce has characterized supporters of the recall campaign as "union thugs" and "far-left anarchists," while one of his most prominent defenders, former Rep. J.D. Hayworth, branded them "socialist thugs who carry swastikas."

But as his copy-and-paste habits show, it's probably Pearce who needs to explain the company he keeps.