As the economy stalled, House Republican debt ceiling hostage-taking pushed us in the wrong direction 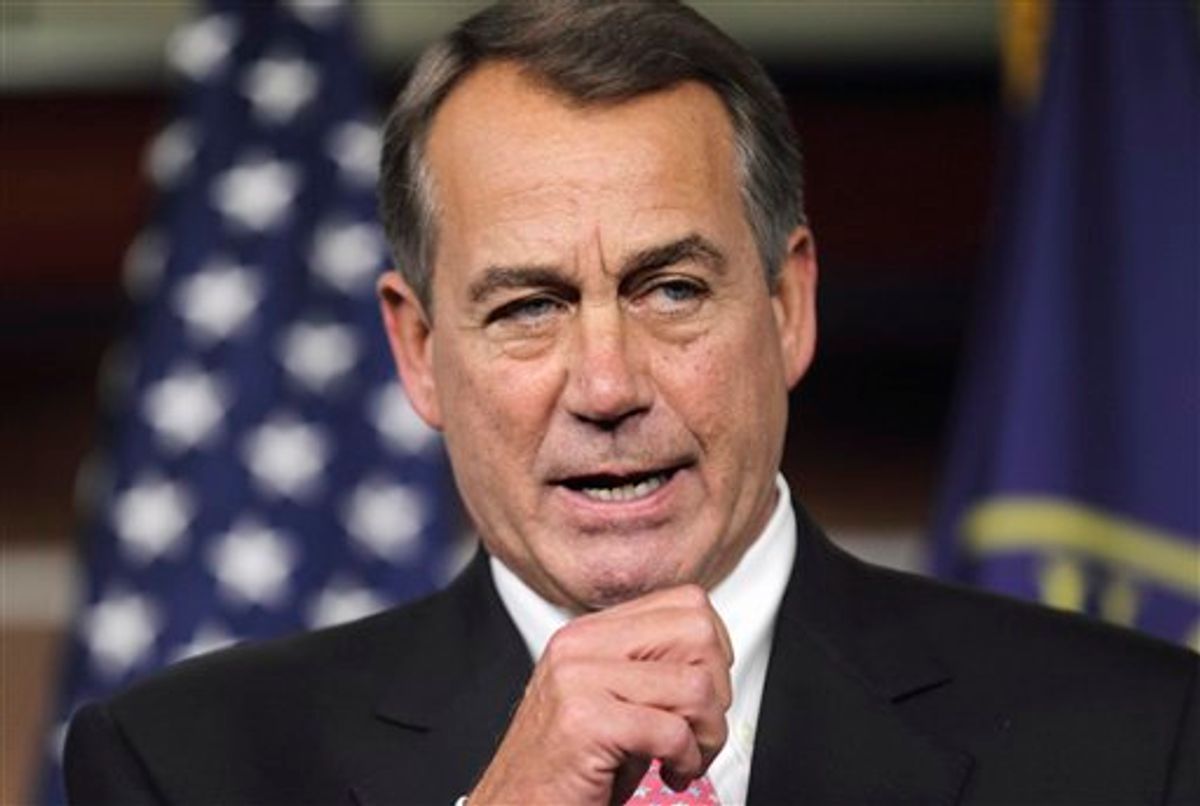 Tuesday's big U.S. stock market plunge, following so closely on the heels of the resolution of the debt ceiling crisis, prompted a bumper crop of liberal schadenfreude. A deficit reduction deal that ruled out tax increases, we were told again and again by Republicans, would build "confidence" that Obama's free-spending ways had supposedly undermined. With their spirits newly bolstered, employers would feel encouraged to start hiring more aggressively. Voilà: an "expansionary fiscal contraction."

Except, the Dow Jones industrial average has been dropping for eight straight days, and the sell-off accelerated as it became clear that the deal was done. How ironic!

But it's almost certainly wrong to attribute Tuesday's big sell-off, as some commentators would like us to believe, to the sudden realization that a fiscal contraction is sure to retard future economic growth. By Tuesday, investors had already figured out that there was going to be a deal -- that scenario, as the market-watchers like to say, was already "priced in." What they didn't know, and what has been fueling negative investor sentiment all week, was how bad the numbers on manufacturing activity and consumer spending were going to be. There has been almost no good news in the economic data for several months now. Each additional negative piece of data solidifies a bleak narrative: The economy has stalled.

That doesn't mean, however, that there isn't a direct connection between the current state of the economy and the decision by Republicans to put the "full faith and credit" of the United States at risk. There's a good argument to be made that the Republican strategy proactively undermined confidence, with unfortunate economic consequences. Economist James Hamilton spells it out:

But I think there was some damage done by carrying the drama as far as we did. People were getting nervous about how this would all play out. When people get nervous they sit on the sidelines, and when folks sit on the sidelines, the economy can stall. Concerns about how this would all end up could have been one factor contributing to the July plunge in consumer sentiment, and that loss in confidence could also be relevant for recent weakness in consumer spending. I found myself getting calls from friends worried about what the wrangling in Washington might mean -- was it still safe to be holding T-bills, and if not, where should people put their money? A few years ago, hardly anybody was talking seriously about the possibility that the U.S. might fail to honor its statutory debt. Today, there is open discussion of downgrading U.S. debt. Although we got through this episode, a residual uneasiness is still going to be there, and may leave us with less room to maneuver when a real problem shakes people's confidence.

We now know that economic growth has been slowing all year, for a number of obvious reasons -- Japan's earthquake, high gas prices, European sovereign debt problems, a gradual deceleration in the Chinese economy. An then, as nervousness started to mount, we watched our own government manufacture an utterly unnecessary crisis that froze investors, employers, and consumers in their tracks at exactly the wrong time.

On Friday, we'll get to see the government's jobs reports for July. If it comes in low, Republicans will immediately claim that the bad numbers are a reflection of Obama's stewardship of the economy. But if you were an employer making hiring decisions in July, while watching House Republicans openly root for a government default, would you open up your company wallet? If Americans aren't feeling confident about the future, John Boehner is at least as much to blame as Barack Obama.