The Tea Party is bigger than the South

Movement conservatism's conquest of the GOP is a national story, not a regional one 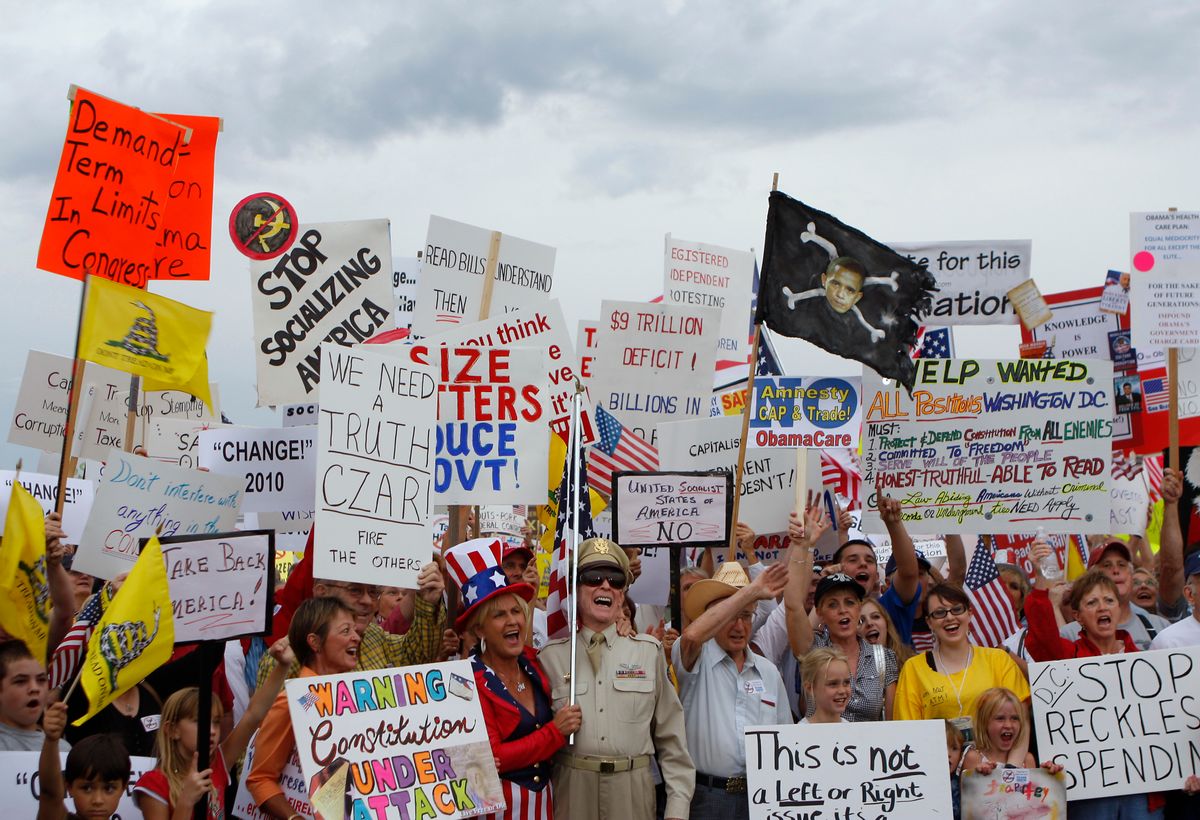 People hold signs during a "tea party" protest in Flagstaff, Arizona August 31, 2009. Organizers say the event is an effort to work against members of Congress who voted for higher spending and taxes. REUTERS/Joshua Lott (UNITED STATES BUSINESS IMAGES OF THE DAY CONFLICT POLITICS) (Reuters)
--

Michael Lind is a very smart and wonderfully erudite writer with a bit of an obsession. His understanding of the deeper cultural wellsprings of American history and politics has left him, as a sort of side effect, with an abiding fearful hostility toward a particular group of people, the "Anglo-Celtic" Southerner. Lind sees them everywhere in our politics as a baleful, disturbing presence spreading bacilli of violence, bigotry and religious fanaticism. And in his recent Salon essay arguing that the Tea Party movement is an essentially Southern phenomenon, his prejudices blind him to a rather important and unprecedented phenomenon: the virtual disappearance of geography as a significant factor in the ideological character of the Republican Party.

To put my own cards on the table, I come from a Scots-Irish Southern background, and perhaps naturally resist Lind's perpetual suggestions that coursing through my veins is an indomitable temptation to handle snakes, start wars and hire myself out to rich people to oppress minorities. As it happens, I'm too much of a scalawag to dispute the atavistic tendencies of my native region. But even though white Southerners tend to be conservative culturally, economically and politically, it's no longer true that cultural, economic and political conservatives are likely to be Southern. And while you can make the argument (as Lind surely would) that the "movement conservative" (the broader group of which the Tea Party movement is merely a noisy and radicalized segment) takeover of the Republican Party has its roots in the South, or at least the Southern and Western "Sun Belt," it hardly seems that relevant anymore. Today's "movement conservatism" speaks with so many accents and "moderate Republicans" everywhere have been all but hunted to extinction.

Lind's argument that "the Tea Party faction that has used the debt ceiling issue to plunge the nation into crisis is overwhelmingly Southern in its origins" is based almost entirely on his regional breakdown of the membership of the House Tea Party Caucus. (He seems to think it is particularly striking that there are no New Englanders in the Caucus, which might be true if not for the fact that there are only two Republicans from the region in the entire House.)

Unfortunately, Lind is about the only person in either party who believes that membership in the Caucus is the gold standard of Tea Party ideology, even in Congress. It was controversial at its founding in part because it includes members seeking to identify themselves with the Tea Party to insulate themselves from primary challenges, and in part because some Tea Folk want no formal representation within either party, while others think the GOP actually is the Tea Party. And despite Lind's lurid hint that maybe Midwesterner Michele Bachmann's prominent role in the Caucus is some sort of front for its actual Cracker power brokers, accounts of its founding make it clear it was very much, for better or worse, her personal project, probably related to her unsuccessful post-2010-election bid for a House leadership post and/or her eventual presidential campaign.

More to the point, since Lind's argument ultimately leads to the contention that crazy Southerners caused the debt limit crisis, Tea Party Caucus members were hardly at the front of the barricades on that issue. Of the 66 House members who voted against the final compromise measure -- undoubtedly the best measure of debt limit extremism -- only 29 were members of the Tea Party Caucus, and conversely, that's less than half the membership of the Caucus. Overall, Southern House Republicans favored the final bill by a 63-31 margin, supplying less than half of the "no" votes.

Moving beyond Lind's own narrowly defined "proof" for Southern domination of the Tea Party, the whole idea is preposterous if you look at the actual spread of the Tea Party in its 2009-2010 heyday. Tea Party-affiliated candidates won heavily contested Republican Senate nomination contests in Alaska, Utah, Colorado, Nevada and Delaware; gubernatorial primaries in New York, Colorado and Maine; House primaries in Idaho, Michigan, Ohio, Kentucky, Delaware, Maryland, New York and New Jersey. Notable Tea Party political heroes include Bachmann of Minnesota, Sarah Palin of Alaska, Mike Lee of Utah, Scott Walker of Wisconsin, Pat Toomey of Pennsylvania, and Chris Christie of New Jersey. The crucible of Tea Party influence over the 2012 Republican presidential nomination process is in Iowa. Even some ostensibly Southern or quasi-Southern Tea Partyers aren't Southern in any cultural sense, including the Cuban-American Marco Rubio of Florida, and the Pauls, father and son, from Pittsburgh, Pa.

And lest we forget, the whole Tea Party phenomenon began with the famous CNBC "rant" by an Italian-American from Chicago named Rick Santelli, and has been fed by vast sums of money from the Dutch-American Koch brothers of Kansas and the media empire of the Australian-American Rupert Murdoch.

Perhaps Lind thinks circularly of conservatism, or such cultural phenomena as evangelical Protestantism, as inherently "Southern" and thus irrelevant to the actual location or background of its advocates. But that sort of exercise becomes quickly meaningless. Yes, cultural and political ideas born or nurtured in the South, from Jeffersonian anti-government sentiment to country music to NASCAR, have spread throughout the country. But that is part of the same nationalization of culture that has made the South a lot less "Southern" than it used to be, as anyone spending time in the vast generic suburbs of Houston or Atlanta or Orlando can tell you.

The "movement conservative" conquest of the Republican Party is a big and important story in which the South has played a major and perhaps formative role. But it no longer plays that distinctive a role. If there are "villains" in this story, and certainly all progressive Americans think there are, it's a mistake to keep looking for them exclusively in the land of cotton.