Egypt's Mubarak denies all charges against him 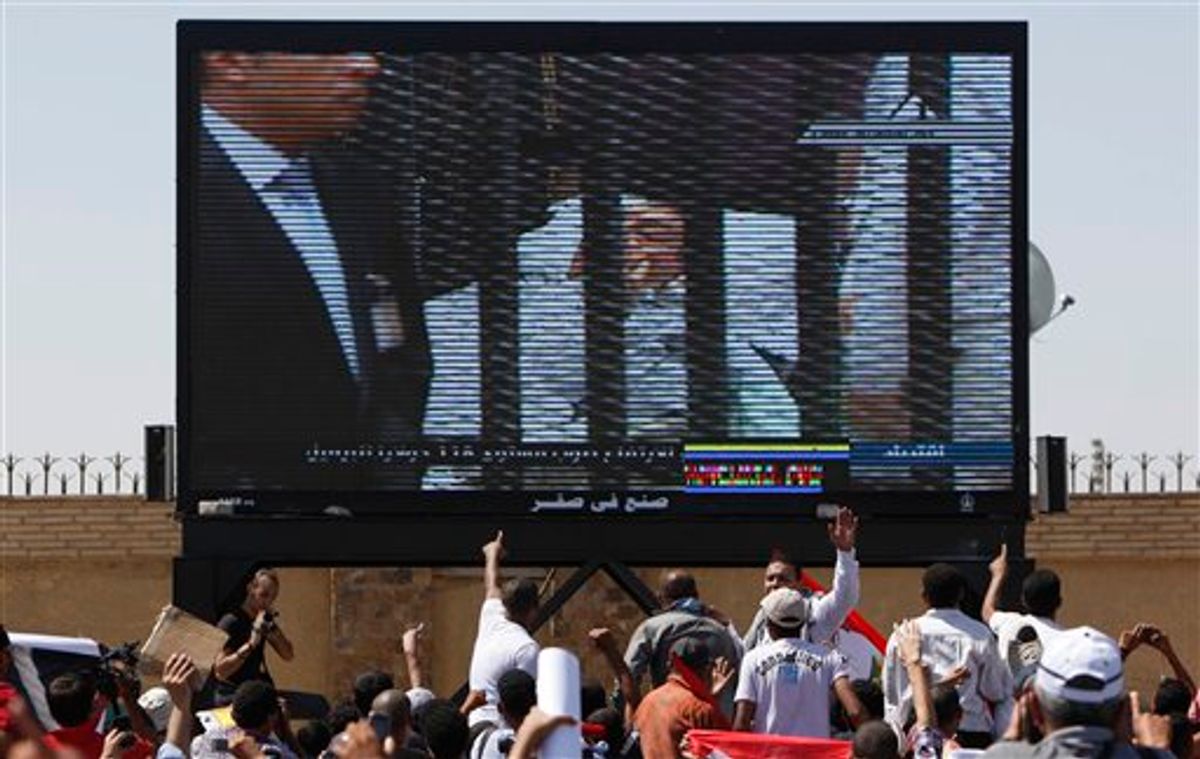 Egypt's ousted President Hosni Mubarak is seen on a TV screen as he enters the courtroom on a hospital bed, outside the Police Military Academy complex in Cairo, Egypt Wednesday, Aug. 3, 2011. Egypt's ousted President Hosni Mubarak was wheeled into a Cairo courtroom on a gurney Wednesday at the start of his historic trial on charges of corruption and ordering the killing of protesters during the uprising that ousted him. The scene, shown live on Egypt's state TV, was Egyptians' first look at their former president since Feb. 10, the day before his fall when he gave a defiant speech refusing to resign. (AP Photo/Nasser Nasser) (AP)
--

An ailing, 83-year-old Hosni Mubarak, lying ashen-faced on a hospital bed inside a metal defendants cage with his two sons beside him in white prison uniforms, faced the start of his historic trial Wednesday on charges of corruption and ordering the killing of protesters during the uprising that toppled him.

Mubarak has denied all charges.

The spectacle, aired live on state television, was the biggest humiliation for Egypt's former president since his ouster nearly six months ago. But it went a long way to satisfy one of the key demands that has united protesters since Feb. 11, the day the regime was toppled.

It was the first time Egyptians have seen Mubarak since Feb. 10, when he gave a defiant TV address refusing to resign.

"I am delighted that I see them in a cage. I feel that my son's soul is finally starting to be at rest and that his blood will cool," said Saeeda Hassan Abdel-Raouf, the mother of 22-year-old protester who was among those killed in the uprising. She spoke outside the trial venue at a Cairo police academy.

Mubarak, his former Interior Minister Habib el-Adly, and six top police officers are charged with murder and attempted murder in connection with the protesters killed during the uprising, according to the official charge sheet. All eight could face the death penalty if convicted.

Separately, Mubarak and his two sons -- one-time heir apparent Gamal and wealthy businessman Alaa -- face charges of corruption. The two sets of charges have been lumped together in one mass trial.

Outside the police academy where the trial was being held, hundreds of Mubarak's opponents and angry supporters scuffled sporadically, throwing stones and bottles at each other while riot police with shields and helmets tried to keep them apart. About 50 supporters pounded on the steel gate trying to get into the compound, chanting "We Love you, Mubarak!" until police charged at the with electrified batons and dispersed them.

The clashes were a sign of the profound emotions stirred by the unprecedented prosecution of the man who ruled Egypt with unquestioned power for 29 years.

For many Egyptians, the trial is a chance at retribution for decades of oppressive rule in which opponents were tortured, corruption was rife, poverty spread and political life was stifled. But for others, Mubarak was a symbol of stability.

Mubarak was wheeled into the defendant's cage on a hospital bed, a sheet pulled up to his chest alongside his nine co-defendants, including his sons Gamal and Alaa, his former interior minister Habib el-Adly and six top former police officials. Though he was pale and his eyes were ringed with red, he appeared alert and aware of what was going on. He showed little discernible emotion.

From time to time, Mubarak craned his head to see the proceedings. Other times, he crooked his elbow over his face as if in exhaustion. While the other defendants sat on wooden benches in the cage, Gamal and Alaa stood protectively next to their father's bed in their white prison uniforms, leaning over at times to talk to him.

Defendants are traditionally held in cages during trials in Egypt. About an hour after the session began, there was a recess and the defendants were led out of the cage.

Up to the last minute, many Egyptians had doubted that Mubarak would actually appear at the trial. It was inconceivable that the man who vowed to rule the country until his last breath and who kept a near total grip on the levers of power, whose name once crowned public buildings around the country, could actually be brought to trial.

There was skepticism that he would show up at the trial up until the moment early Wednesday when Mubarak was taken from his hospital room in the Red Sea resort of Sharm el-Sheikh to a military plane that flew him to a military airport in Cairo. From there, he was transferred by helicopter to the police academy where the trial was held.

Mubarak has been living in Sharm since he was ousted and has been under arrest in a hospital there since April, reportedly suffering from heart problems. His lawyer claims his health has been failing and he is extremely depressed.

Mostafa el-Naggar, one of the leading youth activists who organized the anti-Mubarak uprising, called it "a moment no Egyptian ever thought was possible."

"I have many feelings. I am happy, satisfied. I feel this a real success for the revolution, and I feel that the moment of real retribution is near," he told The Associated Press.

The courtroom itself was divided. Relatives of the defendants sat in rows of seats near the defendants cage, made of iron bars and mesh. A fence running through the middle of the chamber divided them from the rest of the audience of around 300 people, including a few relatives of protesters killed in the uprising, kept far enough that they cannot shout or throw anything at the former leader.

Much of the session dealt with procedural matters, as the three-judge panel officially took the names of the lawyers involved in the case.

Hundreds of Mubarak opponents watched the proceedings on a giant screen set up outside the police academy, at times waving shoes at the scene in a sign of contempt.

Also outside the court were hundreds of Mubarak supporters, furious at the humiliation of their former leader. They scuffled with the Mubarak opponents and threw stones at the screen showing the session.

"We will demolish and burn the prison if they convict Mubarak," they screamed at hundreds of police and army troops backed by armored personnel carriers.

"He is our president and he is going to be found innocent," said one woman in the crowd, Tahami Luteifi.

The trial answers, at least partially, a growing clamor in Egypt for justice not only for the wrongs of Mubarak's authoritarian regime but also for the violent suppression of the largely peaceful uprising, in which 850 protesters were killed.

It came only after heavy pressure by activists on the now ruling military -- one of the few demands that still unites the disparate protest movement.

In February, as protests raged around him, Mubarak vowed he would die on Egyptian soil. The last time Egyptians saw him, he appeared on state TV, handing most of his powers to his vice president but refusing to resign. He proclaimed he was "adamant to continue to shoulder my responsibility."

The next day, his resignation was announced and Mubarak fled to a palatial residence in Sharm el-Sheikh. The ruling generals who took power from him -- and who were all appointed by Mubarak before the uprising -- appeared reluctant to prosecute him, but protests flared anew, pressuring action.

In April, Mubarak was moved to a Sharm el-Sheikh hospital and put under arrest while his sons and former cronies were held in Cairo's Torah Prison.

Many Egyptians are eagerly anticipating the chance at retribution against the longtime ruler. But they also question whether the trial will truly break with the injustices of the past. Some worry that Egypt's new military rulers are touting the trial as proof that democratic reform has been accomplished, even as activists argue that far deeper change is still needed.

The prosecution is an unprecedented moment in the Arab world, the first time a modern Mideast leader has been put on trial fully by his own people.

The closest event to it was former Iraqi leader Saddam Hussein's trial, but his capture came at the hands of U.S. troops in 2003 and his special tribunal was set up with extensive consultation with American officials and international experts. Tunisia's deposed president, Zine El Abidine Ben Ali, has been tried and convicted several times since his fall several weeks before Mubarak's, but all in absentia as he remains in exile in Saudi Arabia.

It is by far the most important of all trials held since February for stalwarts of the toppled regime and that is not just because Mubarak is its chief defendant.

Interior Minister el-Adly had for more than a decade led the 500,000-strong security forces blamed for some of the regime's worst human rights abuses.

Gamal Mubarak had dominated the government in recent years, bringing into power a coterie of wealthy businessmen, many of whom have since been tried on charges of using their positions to amass huge fortunes.

Alaa Mubarak stayed away from politics but is thought to have used his father's name to strike dubious business deals.

Near Tahrir Square, the epicenter of the protesters, a dozen people swarmed around newspapers at a stand, reading headlines about the trial. One man spit on a picture of Mubarak on a front page.

"When he is in the cage and we know he is there, then we know we have started to put our feet on the path of justice," said the newspaper seller, Nabil Hassan, 65. "If he and his accomplices are in court, he becomes one of the people no different from anyone else facing justice. I have faith in Egyptian judges."