The friendly fire ambush my parents kept from me

When I stumbled upon an Army veteran at a bar, I also discovered a gruesome tragedy from my dad's past 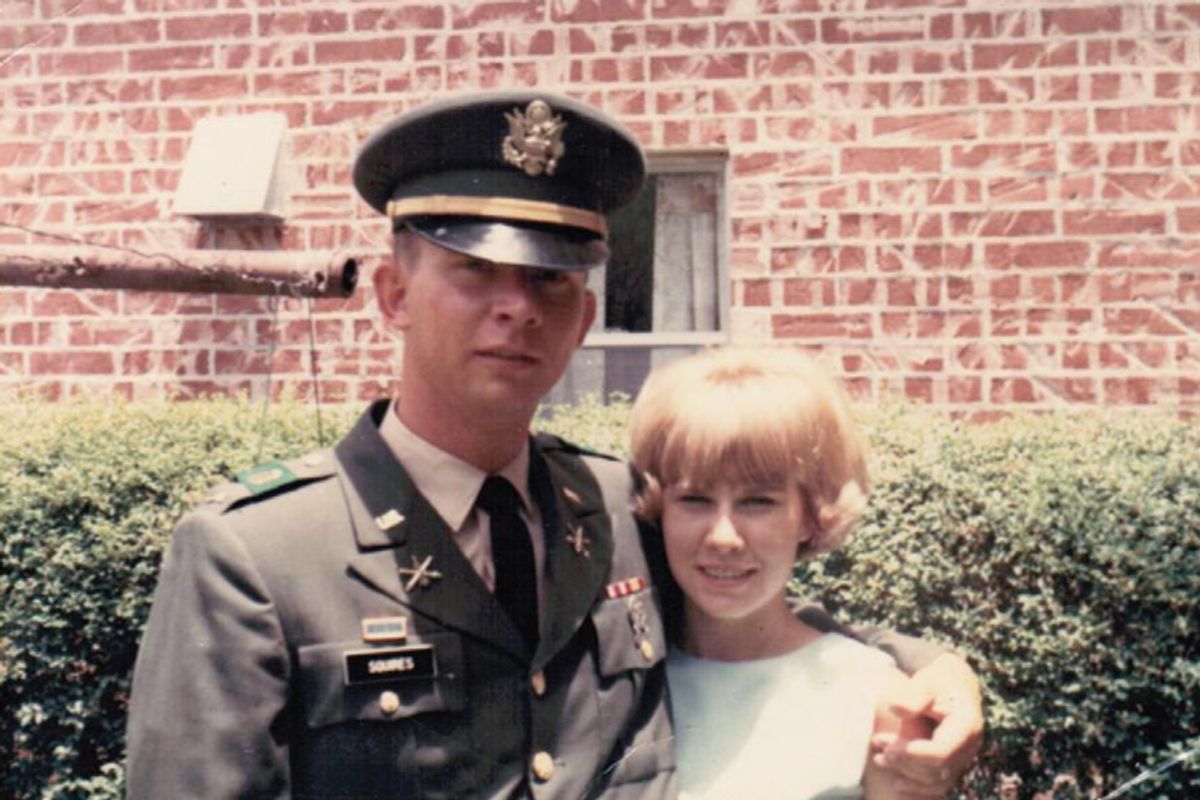 It's the early '90s, and I'm sitting at the bar of a Mexican restaurant in Norman, Okla., next to a disheveled guy in his late 40s who is exactly what you picture when you hear the song "Margaritaville." As I drink my own margarita and wait for my college roommate to finish her shift, I'm hoping he won't hit on me and rapidly realize he isn't that kind of guy. He's in his own world. He lights his cigarette with a Zippo that has the "Ranger" insignia on it. That gets my attention -- Rangers are a special ops combat formation that comprise less than 1 percent of the Army. Small club.

I point at his lighter. "My dad was a Ranger."

I tell him, and he snaps his head away from me, blinks at the stuffed rattlesnake above the bar while I study the back of his OU baseball cap and the curly blond hair escaping from the opening above its size adjuster. He takes a drink. He takes a drag. I figure he's PTSD.

When he finally turns around, he repeats my dad's name like Citizen Kane muttering "Rosebud," and I realize the guy is utterly stunned. "You look like your mama," he says, and that's right. I do. Turns out he knew my father. At first I don't believe him -- what are the chances? -- but he knows too many specifics. He goes on to tell me the most amazing story I've ever heard about my dad -- one this guy never recovered from.

"I know it's not your dad's fault, exactly," the guy says. He pushes the salt around the rim of his margarita glass. "But I hate him anyway."

In the late '60s, during the height of the Vietnam buildup, my future dad was a young lieutenant stationed at Fort Sill, Okla., training to deploy to Vietnam. He had just married a little blonde, someday to be my mother, and he wanted to take her to Houston to meet his own mom, so he asked a buddy of his, a fellow-lieutenant, to substitute for him in a war games exercise my father was scheduled to lead.

Now, this first part of the story is one I had known growing up. My mom had wanted to wow her future mother-in-law, so she dyed her hair a little more platinum than usual. Once she rinsed and dried, her hair turned out blue, a sort of ice blue, according to her story, which I first heard at 7 years old, as she was handing me a blue Popsicle from the fridge. She said, "I accidentally dyed my hair that color once." The story got even funnier because she had then dressed head-to-toe in ice blue -- Jackie O-style sheath dress, gloves and pumps -- thinking it might make her hair less noticeable. It didn't.

But what happened next in the story, that was all new to me.

While my dad and mom were zooming down I-35 listening to Creedence, my dad's friend -- we'll call him Joe Trevor, the same guy I met in the bar 20 years later -- led a group of soldiers, Team A, in a mock-ambush of a military vehicle full of soldiers, Team B.

Team A's job was to jump out from hidden positions along the side of the road and "kill" all the soldiers on Team B as they came by in a tactical vehicle. Team A headed out with their guns to the ambush spot on one of the many dusty roads that crisscross the training areas of Fort Sill. But some of the ammo was live, and before they realized what was happening, Team A killed -- really killed -- two American soldiers on Team B. A friendly fire episode.

Sitting in the bar that night, I feel like I owe the guy something, like I'm going to have to work out my dad's debt to him, set right the accounts. Trevor never recovered from the trauma of taking those lives followed by the shame of the court-martial. While my family prospered, Trevor worked in a liquor store and sold OU cozies out of the back of his pickup truck. If my dad had been the one to accidentally kill all those men, would I even be here? Would my family, all three of us children born after the friendly fire massacre, even exist? It was like the two of them, Lt. Trevor and my dad, were characters in one of those switched-identity movies, but instead of being the rightful king of France, my dad was the guy who should have been holding the smoking gun.

That night, I call my parents. My mom confirms it -- yeah, she remembers that. Sad deal. When I ask her why I never heard the story, she says, "Why on earth would we tell you that? It was a tragedy."

My dad agrees, except he has more details about the incident. The supply clerk on duty in the arms room who issued the live ammo instead of the dummy ammo was a private so ditzy the Army didn't know what to do with him. They even had to take him off kitchen duty because people were getting sick. They thought he would be safe passing out equipment, which was all color-coded and labeled. There was very little live ammo, and it was set apart from the rest of the equipment while the dummy ammo was right there where he could reach it. The guy had to go out of his way to get the live rounds.

I asked my dad, "Don't you feel guilty?"

He told me he felt terrible for the guy -- he and Trevor had been good friends. But guilt? Not really.

"Haven't you wondered why the supply clerk wasn't the one court-martialed?" he asked me.

"It's very simple. Because it was Trevor's job to check the equipment and to make his soldiers check theirs. It's SOP -- standard operating procedure. And Trevor was a sharp guy, but that night, he just screwed up. I'm sorry as hell for what happened, but it was his fault. Straight up." My father would have checked the ammo. After a pause, he said, "I guess if I feel guilty for anything it's knowing that those soldiers would be alive if I had been on duty because I would have caught the mistake. But," he continued, "you can't second-guess life like that. I didn't know."

It's startling to realize, even as an adult, just how much you will never know about the people who raised you -- the 17-year-old teenage girl on scholarship at the Bible college and the guy in the black convertible with the low draft number. My parents have always been mysterious creatures to me, even as they're the people I know best in the world. After I met Trevor, I felt a bit cheated. I kept wondering: How come they never told me this? I shuffled my image of them, my sense of all that is in them, and wondered what else I didn't know.

Now that I'm a parent, I understand better why they kept that friendly fire incident to themselves. My daughter is at the age where everything, absolutely everything I say, prompts her to ask "Why?" and I find myself telling her stories about my life and my past. I know they'll be there with her in the base of her brain, just like my mom's blue hair is at the base of mine. While I've seen my own share of tragedies, it would be twisted to plant those in her imagination and leave her to make sense of them. If they ever come up, I'll talk about them. But I hope they never do.

I also know that the mystery of who your parents are cuts both ways. My past will seem remote to my daughter, and I wish there was something I could say to assure her that I'm the same person now that I was then. That she didn't miss anything. The thing is -- it's not true. She missed a lot, but there's nothing that can be done about it. The past may as well be a land under the sea, even the recent past, and the part of you that stays in that land can never be recovered, no matter how many stories we tell, books we write, pictures we take, or home movies we screen in the living room for our curious descendants. This is the funny way life works: The people you know best in the world will never be fully known to you. Ordinarily, the lands under the sea remain buried, but when a survivor swims to the surface, sits next to you in a bar and lights up, well, there's a time warp. And a story.

For awhile after our first meeting, I saw Trevor fairly often. My roommate worked at that restaurant for another year, and Trevor was a regular. We always said hi, but we never brought the story up again, although once I did tell him that my dad said to say hello. He was sitting at his usual spot at the bar watching an OU game on TV. Without pulling his eyes away from the game, he gave a short, mirthless laugh. He lit a cigarette with his Ranger lighter. I had my roommate take him a drink, a big margarita, but I didn't sit with him. There was nothing to say.

Constance Squires has been nominated for Best New American Voices, the O. Henry Prize Series, and several times for the Pushcart Prize, in addition to having her work featured in the Atlantic Summer Fiction issue. Her debut novel "Along the Watchtower" came out July 5 from Riverhead.