Why the press is ignoring Israel's protests

When news doesn't concern the Israeli-Palestinian conflict, foreign papers have little interest in the Jewish state 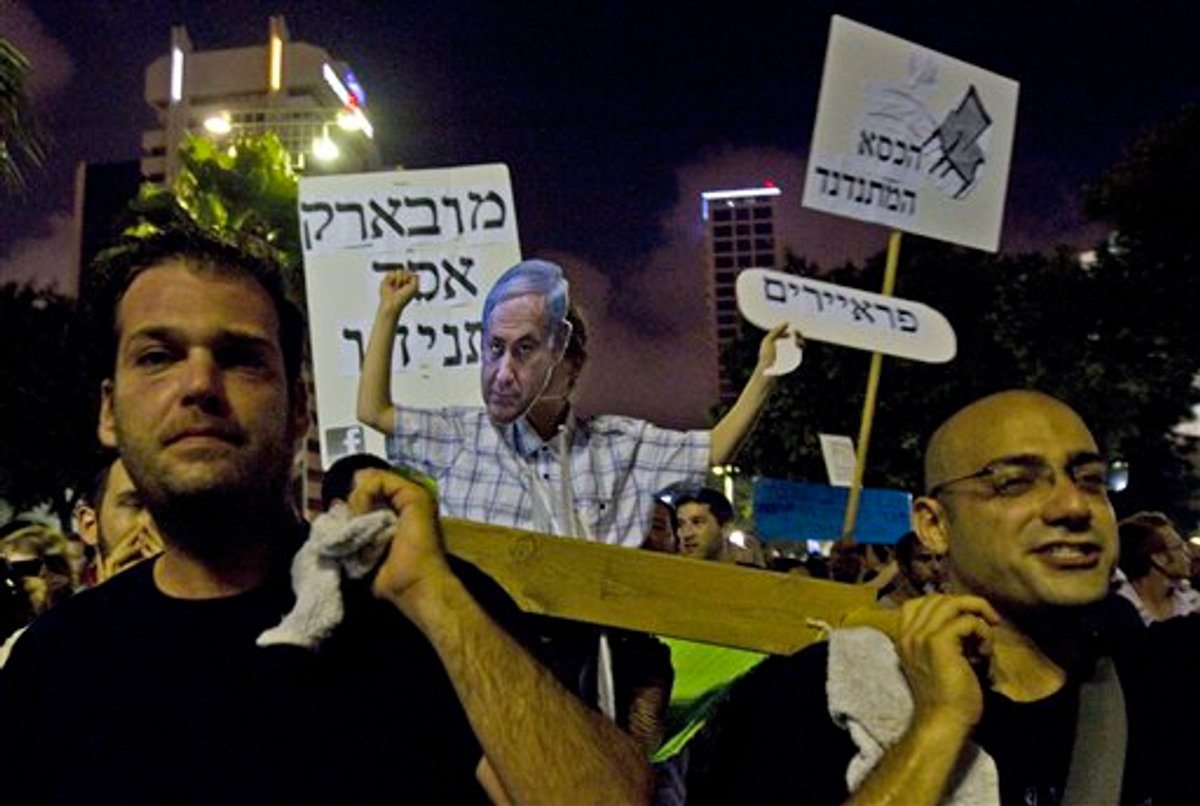 Israelis march with a stretcher with a person wearing a mask of Israel's Prime Minister Benjamin Netanyahu during a protest in central Tel Aviv, Saturday, July 30, 2011
--

TEL AVIV, Israel -- As Israel wound its way toward a fourth week of social protests, which have been steadily growing, some on the ground began to ask if anyone in the international arena was paying attention.

Ami Kaufman, a blogger on the left-wing opinion site 972mag.com, returned home from the 150,000-man march in Tel Aviv Saturday night and published a post entitled, "So suddenly Israel isn't a story anymore?"

"I checked my usual two international papers, the New York Times and the Guardian sites. But there was nothing. Oh well, might be too early. I'll check in the morning. This morning, 7 hours after the demo ended, 10 hours after it began, nothing to be found on the homepages of both respectable outlets. Not a word," Kaufman wrote.

For good and for bad, Israelis are accustomed to being in the news. Similarly, the 800 to 1,000-strong foreign press corps stationed in Jerusalem (it is second in size only to that in Washington, DC) is accustomed to hoarding the headlines.

But when local news does not touch on the Israeli-Palestinian conflict, journalists whose daily bread and butter has for years been conflict-oriented, appear to be at loose ends.

"Nothing is going on," says Reina BenHabib, correspondent for Colombia's 24-hour news channel npn24. "Well, nothing anyone is interested in."

Joel Greenberg of the Washington Post differed, saying the previously "minor" interest exhibited by the foreign media has now been "superseded by events. It changed after Saturday's rally."

Possibly any change is due to the fact that the Netanyahu-led government still seems to be utterly at a loss.

As some of the protest leaders began for the first time to cautiously articulate more explicitly political complaints, such as the amount of money going to Israeli special interests like settlements and the ultra-orthodox populations, rather than to the general economy, a dozen right-wing lawmakers, trying to scramble, suggested Netanyahu could solve the nation's housing crisis by building more rental units in the West Bank.

The 20th day of ongoing and expanding social protests was a news-filled one. Israel's president, Shimon Peres, got personally involved in attempting to bring the government and the fragmented but passionate groups leading the protests together for talks. Protest leaders acquiesced to the presidential pleading and, in preparation, met in Tel Aviv to formulate a list of demands. Meanwhile, they announced a massive demonstration for Aug. 6. They are hoping to draw one million protesters onto the streets of this nation of just 7 million.

After ignoring him for weeks, Prime Minister Benjamin Netanyahu met with Israel Medical Association Chairman Dr. Leonid Eidelman and begged him to call off his hunger strike, now in its second week. Eidelman refused pending a solution to the crisis surrounding underpaid and overworked public hospital doctors.

Claudio Pagliara, a correspondent for the Italian television network RAI, and, with eight years under his belt in Jerusalem, an informal dean of the foreign press corps, said Netanyahu had it coming to him.

"I was expecting this for quite some time," he said. "I'd ask myself, 'why don't they go to the street?' We are talking about the people who have made Israel the economic and security success it is. These are young, hardworking people, high-tech guys, educated people, and the fruits of their labor go to minority interests that basically have been blackmailing this country for years. The ultra-orthodox and the settlers aren't a majority in this country. But because of party calculations, politicians are completely beholden to them. So you have these hardworking, super-successful guys, and they have to send their kids to classes with 40 kids in them. That's not the way a prosperous country is supposed to work."

For Pagliara, part of the fascination with Israel's unrest is borne out of Italy's dire economic predicament. Unemployment in Israel stands at 5.7 percent. In Italy, it is at 10 percent, but among young workers unemployment is at an astonishing 30 percent.

"The Israeli situation is a dream for Italians. A dream," Pagliara said. "But here they feel differently. They feel their future is not going in the right direction."

In a statement Monday, Bank of Israel Governor Stanley Fisher, who is hailed as a miracle worker for safeguarding Israel's economic growth as the rest of the world was roiled by the economic crisis, cited a feeling of "surprise" at the force for the protests.

"Economic indicators are excellent. Unemployment hasn't been this low since 1972," he said.

Pagliara managed to make the story interesting for his editors by selling it as "the Israeli side of the Arab Spring."

"There is no demand for freedom in the Israeli tent cities, of course," he said. "But it is the same generation of protesters, the 30-year-old, educated, middle-class, hardworking, Facebook users. It's the common points that fascinate me."

"To look at this and say that after the Arab Spring there is the Israeli Summer makes me laugh. It is not to understand what is going on here. Even the Arab Spring itself is not a homogenous thing. Who is writing about the gradual reforms of Morroco's king? Or about the lack of any protests in Iraq? No one wants to touch it. You can't compare the nature of our protests to what is going on in Arab countries."

For one man, Yigal Palmor, the Foreign Ministry spokesman, there is a silver lining.

"From a purely egocentric point of you, it's been great. I have time to read mail and organize papers because journalists have been leaving me alone. Of course I'm interested as a citizen. But since its not perceived as strategic news I can read it like anyone else with an opinion. But I'm not working on it."