The myth of the pilotless commercial plane: Make it stop!

More lies and distortions about the role of pilots in the cockpit. And, why can't media get Air France story right? 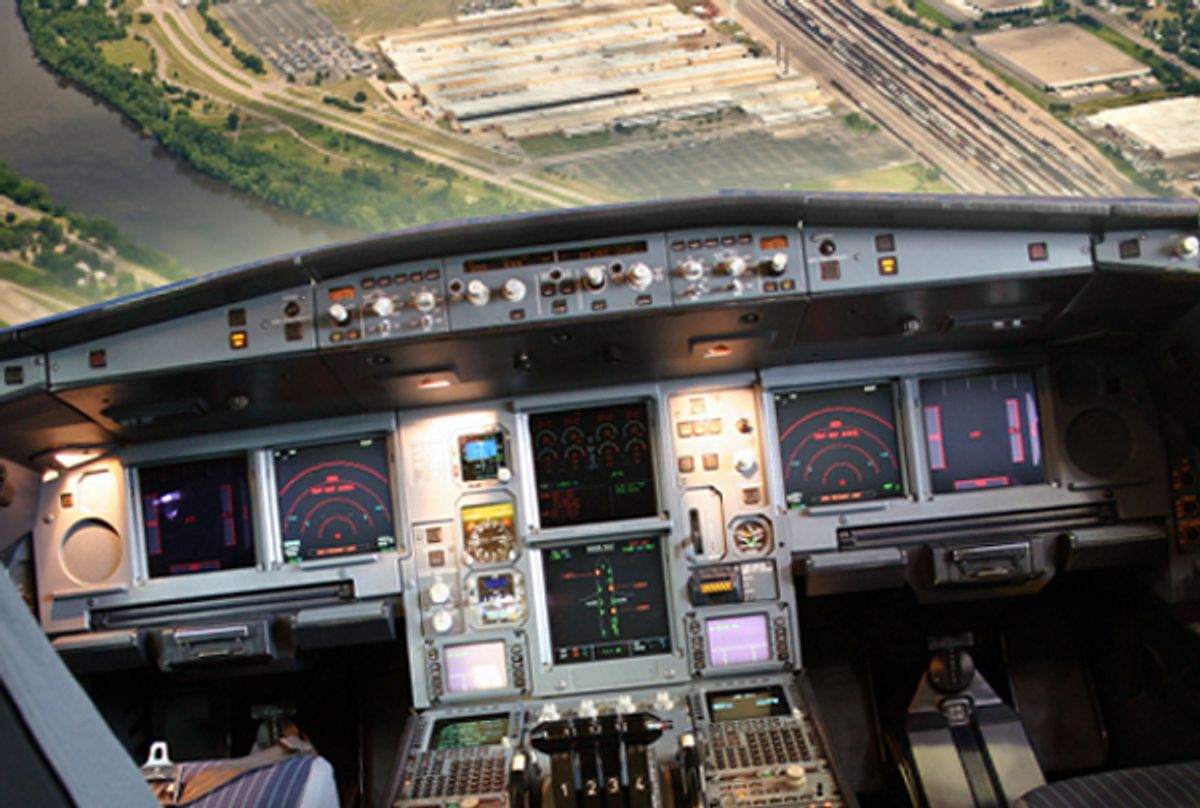 That thunk you heard was my forehead hitting the desk.

I'm not sure I can take this anymore. No sooner do I put a topic to bed -- frustrations adequately vented, readers adequately informed, conventional wisdom duly attacked -- when on comes a flurry of media stories to start the whole thing over again. I can hardly open the paper or click to a website without my blood pressure going through the roof.

Yeah, you know what I'm talking about: more lies and distortions about the role of airline pilots in the modern cockpit -- much of it coming on the heels of last week's report on the 2009 Air France disaster.

First up, our old friend Mary "Missy" Cummings is at it again. Dr. Cummings is a former U.S. Navy F-18 pilot and the associate professor of aeronautics and astronautics at MIT, where she is also director of the university's Humans and Automation Lab. Those are some impressive credentials, I'll grant her that. Unfortunately, when it comes to commercial flying, she is either intentionally misinforming people -- presumably to inflate the value of her research -- or she simply doesn't know what she's talking about.

Cummings' specialty is spouting fallacies about the potential for unmanned commercial aircraft. She is the one who, a year or so ago, told us how cargo airlines are "chomping at the bit" to do away entirely with their pilots and replace them with remote-control freighter planes. (Ignoring the vast technological challenges that get in the way of this prediction, I flew freighter jets for four years and I assure you my airline was not remotely considering such an idea.) She believes that pilotless commercial planes will be up and running within 10 years, and to bolster this contention she consistently exaggerates the capabilities and operational realities of cockpit automation.

On July 27, Cummings was a guest on "The Colbert Report," offering up some vintage claptrap. "Planes take off every day with the pilot never touching the stick, ever," she said on the show. "From takeoff to landing." She has said this same thing in various settings in the past, leading journalists to publish articles claiming that planes routinely take off and land by themselves.

Except that they don't. This does not happen; not in a Boeing, not in an Airbus, not at any commercial airport, anywhere. As I've explained before, fewer than 1 percent of commercial aircraft landings are "automatic." As for takeoffs, a full 100 percent are the manual kind; there is no such thing as an automatic takeoff.

And what do terms like "automatic" and "autopilot" mean, anyway? Autopilot is simply a tool, along with many other tools available to the crew. You still need to tell it what to do, how to do it and when to do it. And although it frees the pilot from having to have his or her hands physically on the control wheel (or sidestick) or thrust levers, this is only a fraction of what the act of "flying" entails. The autopilot is not flying the plane. The crew is flying the plane, through the autoflight system.

My old comparison between flying and medicine is, I think, still the best one: Modern technology helps a pilot fly a plane the way it helps a surgeon perform an operation. Sure, some procedures are more routine than others, but never are they easy, and none are "automatic" in the way that people are led to think. And thus, a jetliner can no more "fly itself" than an operating room can remove a tumor or perform an organ transplant "by itself." (For more on what autopilots do and don't do, see here.)

I know how this sounds to some of you. It comes across as jealousy, or I sound like a Luddite pilot trying to defend his profession against the encroachment of technology and an inevitable obsolescence.

You can think that all you want.

To echo what I said of Cummings in a piece last June: I am sure that she is exceptionally bright. She's enamored of her work, and that's mostly a good thing. However, she does not fly commercial planes for a living, and the way she extrapolates her research into some near-future fantasy of remotely controlled jetliners is way, way over the fence. Seeing how she flew supersonic fighters in the Navy, she must be a skilled aviator. However, she ought to be ashamed of herself for helping perpetuate the public's acute misunderstanding of how planes fly and what airline pilots actually do.

Not that she's alone.

Last week, investigators released their latest findings and recommendations regarding the May 2009 disaster involving an Air France A330. (The accident was discussed in at least seven of my columns, including here, here, here and here.) The report was picked up by pretty much every news outlet on the planet, and promptly reduced to nonsense.

How about the Associated Press, and this story from July 29:  "... neither of the co-pilots at the controls had received recent training for manual aircraft handling," reported the AP.

Not to be outdone was the New York Times, which coughed up a similar summary: "The co-pilot at the controls of the Air France jet," said the paper, "had not been trained to fly the aircraft in manual mode."

Manual mode? Manual aircraft handling? Are you kidding? The first officers at the controls of Air France 447 (the captain was initially on his rest break when the troubles began) were not apprentices. They were fully rated, Airbus A330 pilots with thousands of hours of experience. Of course they were trained in "manual aircraft handling"! And yet again we have the suggestion that a "manually" flown plane is some sort of oddity, and that pilots aren't used to it. This is bollocks.

What the investigators actually are concerned about is a lack of recent, specific training for manual, high-altitude maneuvering, particularly following a loss of primary instrument data, as well as training for high-altitude stall recovery. This is not at all the same as saying the crew had no training to manually fly the aircraft.

That the pilots lacked this training is worthy of some focus. Jetliners behave very differently at upper altitudes. It's a less forgiving, less stable realm, and high-altitude stalls are extremely dangerous. But all pilots understand these principles, and would be expected to fall back on basic flying skills. In any case, it may not have made any difference. The crew reacted improperly, it seems, in the throes of a high-altitude stall, turning a difficult situation into a catastrophic one. But consider the circumstances: They were dealing with multiple critical failures, in violent weather, in darkness.

"The crew was left attempting to recover their aircraft in heavy weather while their primary displays were constantly going blank and resetting," says Dave White, a former Airbus captain. "One imagines how confusing the cockpit must have been with all the malfunctions -- and, consequently, no idea what instruments to trust. I question the unstated assumption that the crew was seeing the same data that the flight data recorder was getting. I would also like to know if the mishap aircraft was showing even basic attitude data to the crew. It is possible those displays were also blanking out during the descent -- or providing erroneous data. In my opinion, hardware and software failures resulted in a situation that perhaps no crew would be able to recover from. This was a design accident, not a pilot error accident."

In other words, all the experience and training in the world may not have made a difference. The Air France report also emphasized that the first officers lacked specific CRM training -- that's cockpit resource management, an industry human-factors term pertaining mainly to task delegation -- for those times during flight when the captain is not present (typically a third to one-half of a flight's duration, depending on the crew rest schedule). The media has made much of this. In the words of the New York Times, investigators are calling for "more stringent skill requirements before co-pilots are authorized to replace the captain at any time during the flight."

This is, at best, a misunderstood and goofily condensed interpretation of what the recommendation really means.

Then again, I can't tell what it really means. Here's the thing: I am one of those first officers that commonly takes the place of the captain during long-haul flights. When it's the captain's turn for his designated rest period, another first officer and I are the ones in immediate charge. The idea that we would need additional training for these periods seems to me redundant. We are already fully rated in the aircraft. We perform just as many takeoffs and landings as captains do, and receive pretty much identical semi-annual simulator workouts. And CRM is CRM, regardless of which two pilots are at the controls.

Last but not least we've got a CNN story, which quoted somebody named David Kaminiski-Morrow, an editor at Flight Global magazine.

Says Kamininski-Morrow: "Modern-day planes are capable of flying themselves most of the time, which means pilots have to be capable computer managers. The danger of this is that when things start going wrong, is the pilot still in the loop? The computer might recognize what's wrong, but if the pilot doesn't, how will he get out of it?"

That's one of the dumbest quotes I've seen in a long time. "The computer"? "Still in the loop"? One imagines a pair of pilots haplessly nodding off as their jet goes to pieces around them.

Bang, bang, bang. There goes my head against the desk again. Here is a magazine editor -- an editor! -- speaking on behalf of airline pilots, to one of the world's most preeminent news services, and describing, cluelessly, what challenges they face.

Am I too wound up about this? Am I taking it all too seriously?

Well, you'd be frustrated too if your profession was continuously being demeaned, devalued and infantilized by a chorus of supposed experts who have no business talking about it. These are the people the media turns to. Their half-baked analyses are further condensed and caricatured by reporters and newscasters, and fed to masses.