Right-wing attacks on President Obama are vicious, but the ugliness began with President Clinton 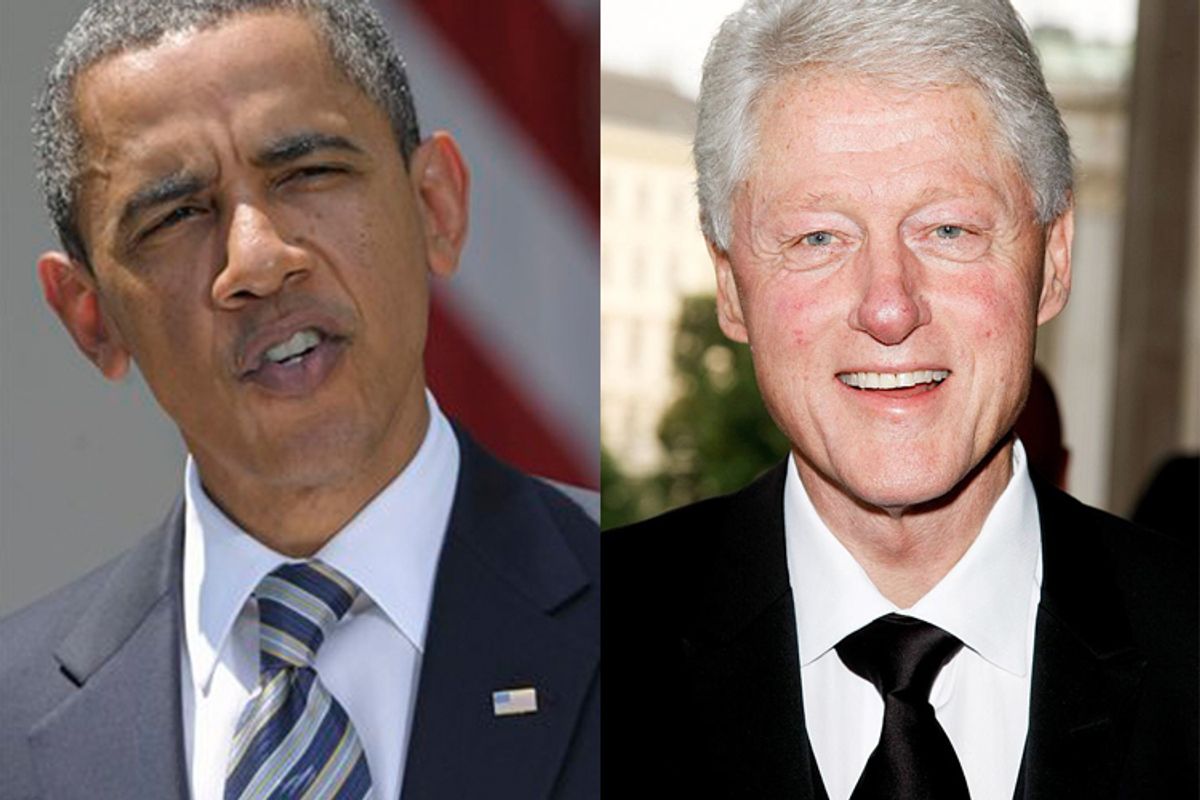 Alex Pareene captured the craziness of conservatives and business leaders who demonize President Obama, the man most progressives, whether they like it or not, recognize as the conciliator in chief. Home Depot chairman Ken Langone is just the latest to become unhinged on the topic of Obama, blasting him on CNBC recently:

"He is not acting presidential. He is behaving in a way designed in my opinion to divide us, to make us look at each other with skepticism, with suspicion. That is the end of America as we know it," Langone fulminated. "The destruction he is inflicting by his behavior will carry on long after we settle the debt limit."

I don't know who Langone is describing, but it's not Obama. Sure, he's taken a jab or two at fat cats, and quickly retreated. Mostly he's reached out to Republicans time and again, only to be rebuffed and humiliated, from the earliest days of his term. On "Hardball" today we discussed the extreme reaction this conciliating president has triggered in the GOP, from the earliest moments of his presidency.

But as we talked, I felt I had to point out: Demonizing Democratic presidents didn't start with Obama. Racism makes the Obama attacks uglier, but the attacks on President Clinton were plenty ugly, too. Leaving aside the sex scandals, Clinton's civil rights history earned him the animus of Arkansas right-wingers while he was governor. When Clinton became president, Jerry Falwell and friends promoted "The Clinton Chronicles," a "documentary" claiming he'd run an Arkansas racketeering operation responsible for cocaine smuggling, bank fraud and murder. He was accused of having a hand in the suicide of his friend Vince Foster; the Wall Street Journal demanded an investigation into whether it was actually murder. Sen. Jesse Helms warned him that if he visited military bases in the South, "He better have a bodyguard." All that on top of fruitless investigations into Whitewater, "travelgate" and allegations of improper Chinese fundraising  -- and then impeachment.

John Judis argues in the New Republic that the modern-day Republican Party has become an "insurrectionary" party that gets its way by any means necessary:

Over the last four decades, the Republican Party has transformed from a loyal opposition into an insurrectionary party that flouts the law when it is in the majority and threatens disorder when it is the minority. It is the party of Watergate and Iran-Contra, but also of the government shutdown in 1995 and the impeachment trial of 1999. If there is an earlier American precedent for today’s Republican Party, it is the antebellum Southern Democrats of John Calhoun who threatened to nullify, or disregard, federal legislation they objected to, and who later led the fight to secede from the union over slavery.

I go back to Grover Norquist telling his friend Deval Patrick at a Harvard reunion during the Bush administration that on the off chance another Democrat ever became president, "We'll make it impossible for him to govern like a Democrat." Norquist and friends did their best with Clinton; they've succeeded with Obama, with terrible consequences for the country.

Here's the "Hardball" conversation with Chris Matthews and Howard Fineman: