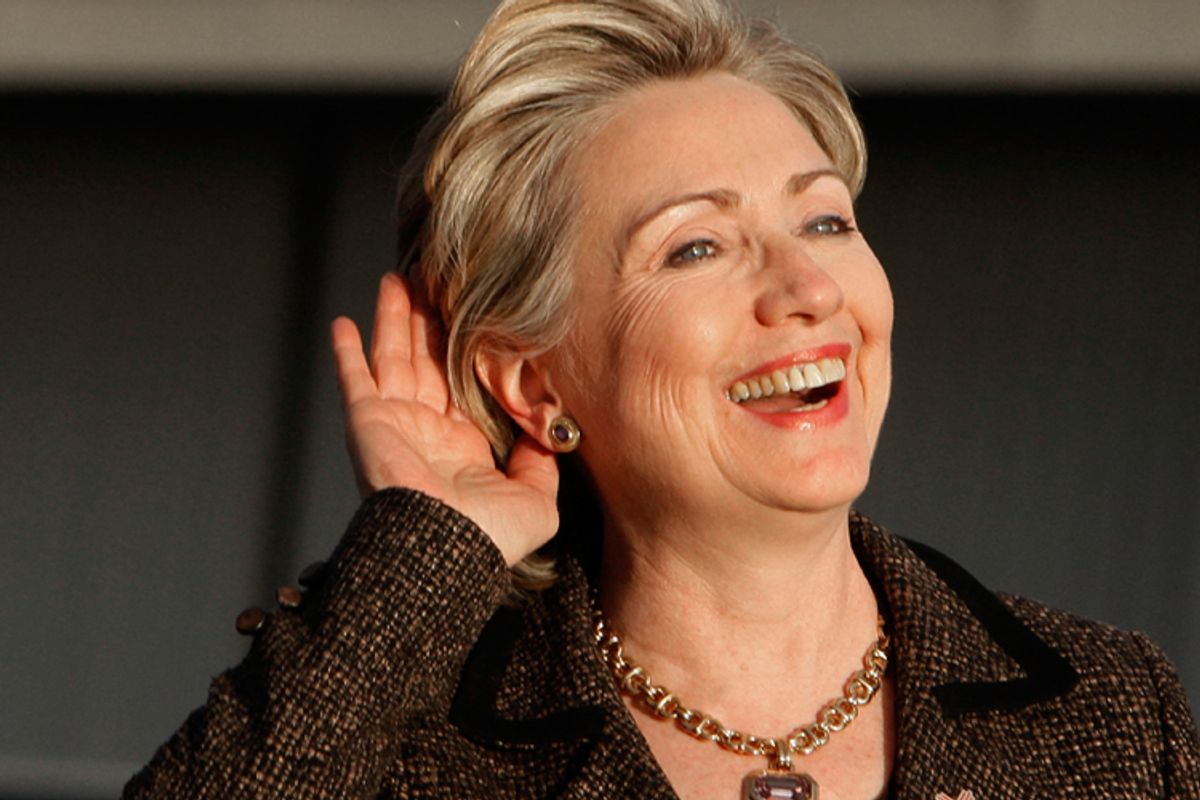 This originally appeared at Presidential Power

If I were a Democrat (and I'm only posing as one here!), this would be why I think Hillary Clinton should challenge Barack Obama in 2012.

To begin, the president is in deep political trouble. I presented some basic economic indicators earlier that show the historical comparisons indicating that Obama is in Jimmy Carter territory. These are crude measures, of course. But more sophisticated forecast models, such as Yale economist Ray Fair’s, which uses per capita growth of real Gross Domestic Product during the three quarters preceding the election; the growth in inflation during the incumbent’s term; and the number of quarters during the incumbent’s term in which real GDP grows by more than 3.2 percent to predict the popular vote, now show Obama winning slightly less than 50 percent of 2012 popular vote. Given current economic projections, there’s not likely to be any more strong growth quarters between now and November 2012, meaning the odds for Obama’s reelection are probably not going to get better. To be sure, most of the political science forecast models don’t kick in until a year from now, so it’s a bit early to rely on them. But if Clinton is going to run, she can’t wait. And right now Obama is very vulnerable to a strong Republican challenger.

Of course, the fundamentals won’t change if she’s running. But note that the forecast models aren’t predicting a Republican blowout -- they are forecasting a race that is, at this point, too close to call. That means marginal changes in turnout among key groups are crucial. Here’s where Hillary has the advantage.

To begin, her stint as secretary of state has done wonders for her approval rating, as indicated by Gallup poll surveys dating back to her time in the White House. While the president, mired deep in the political muck of Washington politics, sees his approval falling to 40 percent, Hillary’s has climbed close to 70 percent -- and even higher in other surveys. Yes, this is partly an artifact of her position, which places her above the fray of domestic politics, and yes it will fall if she enters the race. But the fact remains that her public profile has been bolstered in the last several years, and she enters the race with that advantage. Indeed, she can use that non-partisan vantage point to frame her decision to run: It’s not about politics -- it’s about the future of this country both here and abroad. Her second advantage relates to the first: She’s not part of the mess at home. She didn’t weigh in on the stimulus bill, or healthcare, or the banking overhaul, and she certainly bears no responsibility for the state of the economy. In this respect, she’s the Obama of 2012: a candidate who can run on the promise of change, without specifying the nature of that change. And she has an added advantage: years of governing experience in the White House, the Senate and most recently within the foreign policy establishment. To be blunt, her résumé outshines the incumbent's. Meanwhile, her liabilities (the healthcare fiasco, Hill and Bill) have largely receded from public consciousness. And in any case, they are now dwarfed by Obama's baggage. In 2008, Obama was the unsullied one. Not anymore. Heck, even the Big Dawg has been largely rehabilitated.

This leads to a third point: buyer’s remorse. It’s not one she can directly bring up (after all, she’s above politics), but others will certainly remind voters that she did warn you. Remember that 3 a.m. phone call? Remember the warning about the rose-colored petals falling from the sky? Remember about learning on the job? Sure you do. Doesn’t a part of you, deep down, realize she was right? If I heard it once this past week, I heard it a thousand times: You were duped by Obama’s rhetoric -- the whole "hopey-changey" thing. And you wanted to be part of history, too -- to help break down the ultimate racial barrier. That’s OK. We were all young once. But now it’s time to elect someone who can play hardball, who understands how to be ruthless, who will be a real ... uh ... tough negotiator in office. There won’t be any debate about Hillary’s, er, "man-package."

All of these factors mean Hillary will appeal to precisely those voters who are most disillusioned with Obama, and who the Democrats lost in the 2010 midterms: older voters, the less educated and independents. Moreover, she has stronger support in the key battleground states of Ohio and Florida and maybe even Pennsylvania, whose electoral votes may determine the 2012 election. And the chance to finally put a woman in the Oval Office will energize voters in a way that Obama’s candidacy cannot.

The problem with this scenario, of course, is that it ignores a very big obstacle: the nomination fight. The reality is that, at least until the recent debt deal, Obama continues to have strong support among Democrats. Why should we expect Clinton to prevail in a nomination fight? Indeed, a Gallup poll survey from last September shows Obama beating Clinton in a hypothetical nomination contest. Politically speaking, however, that poll came out ages ago. Since then, it has become clear that the economy is not going to rebound any time soon. Obama’s approval ratings continue to drop, and this is before the full impact of the debt negotiations on Democratic support -- particularly within Obama’s base: those Democrats with higher incomes and better education, as well as minorities and younger voters. The other fact to remember is that despite the gaffes in Clinton’s 2008 primary run -- the failure to fully contest caucus states, the mishandling of the Florida and Michigan delegates issue -- she essentially fought Obama to a nomination draw. Indeed, by some estimates she won more popular votes than he. In the end, his nomination was secured not by winning enough delegates at the ballot box, but by gaining support from the non-elected superdelegates. Four years later, who do you think has gained more politically among likely Democratic voters?

Make no mistake about it: A contested nomination would be a nasty, brutish spectacle. But in all likelihood the winner would come out stronger. Think back to 2008: Despite the appeals from Obama backers that Clinton should drop out for the good of the party, she stayed in until the end -- and in so doing exposed vulnerabilities in his candidacy in time for him to address them before the general election. A primary challenge will be good for the party -- it will give Democrats a real choice. It will mobilize the base. And it will expose candidate strengths and weaknesses leading into the general election. Remember, there’s no evidence that previous primary challengers weakened incumbents. The causal arrow runs in the other direction: Incumbents like Carter in 1980 were challenged because they were already weak. A Clinton run won’t damage Obama, and may strengthen him -- if he fends her off.

And really -- isn’t it time to elect a qualified woman as president? We are way behind the rest of the world in this regard.

But there's a more important reason why Hillary should run -- one that transcends party, or personal gratification, or payback, or breaking barriers. She should run for the good of the nation. She should run to prevent a rollback of healthcare, to make sure the Bush tax cuts are not renewed, to protect entitlement programs, to make sure Republicans -- who are poised to regain the Senate in 2012 -- don’t control all three governing institutions through 2016. It’s not about her -- it’s about the future of the country.

Madam Secretary, if you are reading this -- the president is a good man who happened to be very unlucky in office. He inherited problems of almost unprecedented severity. But this is no time for sentiment to cloud your judgment. You need to do what’s right.

If not now, when? If not you, who? The nation cries out for leadership. Run, Hillary, Run!