"Jersey Shore" and "Boardwalk Empire." Bon Jovi and the Boss. As MTV's hit returns, making sense of the cheesy/cool

By Jen A. Miller 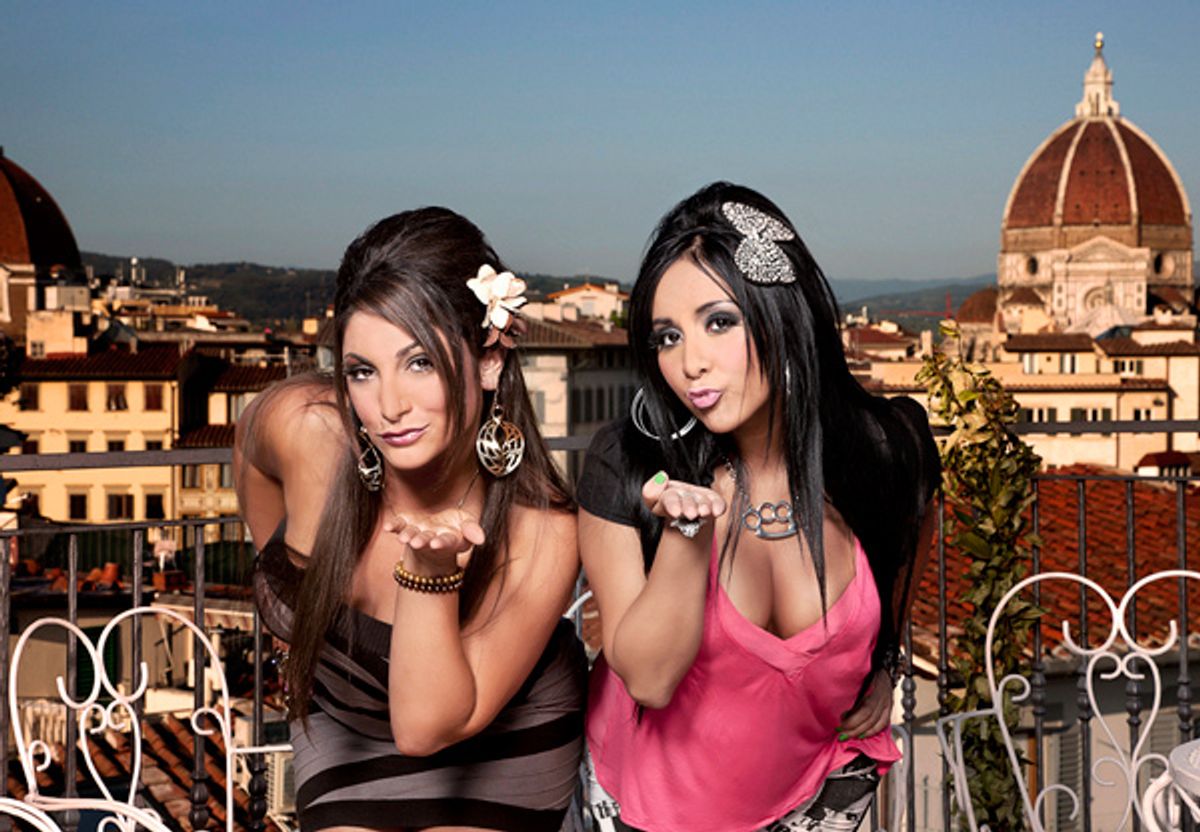 Deena and Snooki from "Jersey Shore"
--

In late June, the Tina Fey sightings began along the Jersey Shore, and emails started rolling in.

"She's here for the week -- I hear she's nice to her hosts!" "She's entertaining a big group at the Blue Pig Tavern. They're laughing a lot." "I saw her walking on the beach this morning. She's even more beautiful in person."

This was Fey's second straight year vacationing in Cape May, a shore town at the southern tip of New Jersey. By all citizen-paparazzi accounts, she and her family had a wonderful time. Of course, this is also the woman who had a wonderful time spoofing MTV's "Jersey Shore" on "Late Night With Jimmy Fallon," her pregnant belly stuffed into some sort of animal-print mini, the month before her actual Jersey Shore retreat.

Love and mockery just go hand in hand in New Jersey, the state that just might be the best proof of F. Scott Fitzgerald's timeless line that "the test of a first-rate intelligence is the ability to hold two opposing ideas in mind at the same time and still retain the ability to function."

As "Jersey Shore" returns for a fourth season tonight, the Garden State is braced to become a pop-culture punch line again. (Even the comedians who live here treat us as a joke; I'm looking at you, Montclair's own Stephen Colbert.) But America laughs at the spray-tanned douchebags and trolls of "Jersey Shore," then showers HBO's "Boardwalk Empire," based on another Jersey Shore town, with praise and 18 Emmy nominations. It's home to "Jerseylicious" and "The Sopranos," and considers both Jon Bon Jovi and Bruce Springsteen as poets of the people. We elect Jim McGreevey ("I am a gay American") governor, but also Chris Christie (an American blowhard), and watch as the Boss tells the First Fan to stop using his songs as campaign fodder.

It's a state with a split personality that stretches from one side of the turnpike to the other, and with a collective chip on its shoulder that comes from having our cultural products passionately admired and hilariously derided at the same time. The walls between high and low culture have been demolished -- everywhere except New Jersey. We're all of it, at once.

"Everyone from New Jersey isn't 'The Sopranos' or the cast of 'Jersey Shore' in the same way that everyone from Queens isn't Archie Bunker and everyone from L.A. isn't a lifeguard on 'Baywatch,'" says Fountains of Wayne bassist Adam Schlesinger, who grew up in Montclair. The band, whose new album "Sky Full of Holes" was released this week, is named after a now-closed lawn furniture store in Wayne, N.J. "It's just an easy stereotype, and a fairly entertaining one, too, I guess. It's harder to make a hit TV show about 'many great minds and talents.'"

Of course, we're not all like the drunks, the table flippers, the GLTs who populate MTV's vision of the state. Do those "characters" on reality television exist in New Jersey? Well, yes, on the same level that reality television is actually real.

On the other side, you have the New Jersey as others see it through their blinders. Our proximity to the New York media world has made it easy to launch reality shows with small budgets within our borders. It's a lot cheaper to put your camera crews in Seaside Heights and focus on the more colorful members of our flock than it is to travel to, say, Tampa, where, as I learned attending college, the spray tan/fake tit culture thrives year-round.

"I'm sure Indiana's a colorful, complicated place, too -- but how would the rest of us know if nobody ever talks about it?" says Tom Perrotta, the best-selling author of "Election," "Little Children" and the forthcoming "The Leftovers" -- and a New Jersey native.

Being picked on by New Yorkers (who point to us as the feared "other" to justify why they're spending $2,500 a month to live in a closet) has solidified our "Jersey Strong" attitude, though. No character embodied that as much as Tony Soprano. New Jersey is a little like him. Everyone wants to hate Tony, but they want to be his best friend and/or sleep with him, too.

"When I got out [to Hollywood] in the '70s, they made fun of me. They threw back at me every single joke Johnny Carson ever told about New Jersey," says Michael Uslan, producer of every Batman movie since 1989. He grew up near Asbury Park and his new memoir, "The Boy Who Loved Batman," is in part a love letter to the state. "But things changed. After 'The Sopranos' came on, there was a new respect. I think they were afraid of me. I probably had the only car when I drove onto the lot of the studio where the guys were afraid to check my trunk."

So could it be that while we're hunkering down to weather the reality TV shitstorm, the state's odd cultural duality has also created a strange short of cachet?

"I guess it had some kind of stigma to say you were from New Jersey, but it seems like now it's almost ... reverse cool," says Schlesinger. "It's been the subject of so many different kinds of movies, TV shows, songs that people seem to have a broader sense of it or something now. And sometimes it feels like everyone I meet everywhere is actually from New Jersey anyway."

So fine. Reality TV is a salve for tough times. Let Jersey be your balm. Mock our "real" housewives, boo the women of "Jerseylicious." Tune into the new season of "Jersey Shore." Laugh if it makes you feel better. But keep this in mind: Saxophonist Clarence Clemons is a driving reason why Bruce Springsteen didn't languish on Thunder Road. Instead, he became the Boss and Clarence became the Big Man. They met in at Asbury Park -- on the real Jersey Shore. "Jungleland" is the greatest saxophone solo you will find in rock music. On the cover of "Born to Run," Bruce is leaning on Clemons' back.

Who's leaning on who right now? Ben Franklin, yes, he of the famous turnpike rest area, once called New Jersey a keg tapped on both ends. Right now, it might seem like America's kicking that keg. Just remember that you're guzzling from it, too.

Jen A. Miller is a freelance writer, editor and author. Her work has appeared in the New York Times, Philadelphia Inquirer, New Jersey Monthly, Men's Health, Men's FItness, Woman's Day and Allure, among other publications. She's also the author of "The Jersey Shore: Atlantic City to Cape May."

MORE FROM Jen A. Miller