The South and the Tea Party, revisited 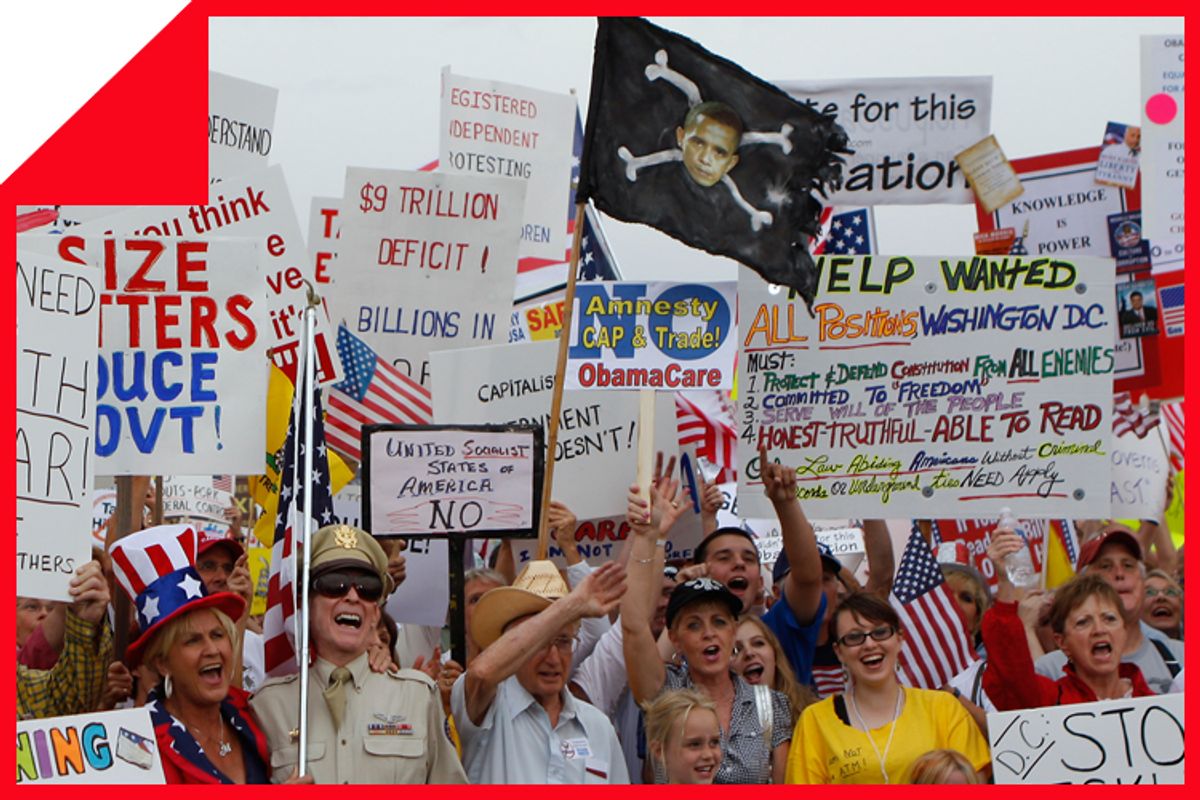 In response to my essay in Salon pointing out the significance of the disproportionately Southern membership of the House Tea Party Caucus, Ed Kilgore, an insightful political analyst, has accused me first of bias against Southerners and second of exaggerating Southern influence on the Tea Party right. Kilgore writes:

To put my own cards on the table, I come from a Scots-Irish Southern background, and perhaps naturally resist Lind's perpetual suggestions that coursing through my veins is an indomitable temptation to handle snakes, start wars and hire myself out to rich people to oppress minorities.

About half of my own ancestors were Scots-Irish Southerners, and I have never made the "perpetual suggestions" that Kilgore attributes to me. On the contrary, as my readers know, I have always distinguished my criticism of the traditional southern political-economic system, which chiefly benefits the region’s elite, from criticism of Southerners as such. Not long ago here in the pages of Salon I wrote:

Here's how I see it. Liberals should respect and promote the interests of working Americans of all races and regions, including those who despise liberals. They are erring neighbors to be won over, not cretins to be mocked.

The majority of Southerners, white and black, including the black Southern diaspora in other regions of the country, are victims of the South's historic caste and class system, just as many Latino immigrants come from families and regions oppressed by Latin American oligarchies. Needless to say, Southern blacks suffered far more from slavery, segregation and the inequality that has persisted even after the abolition of the formal caste system. But Southern whites reduced to debt peonage after the Civil War, and the half of the white Southern electorate that effectively was disfranchised by the Southern elite in the South between the 1900s and the 1960s, were victims of the oligarchs as well…

The traditional liberal solution to such alienation is economic reform, education and political empowerment. But reform is difficult and expensive. And it is much less fun than caricaturing entire ethnic or regional groups, particularly those whose members tend to have less money, less education and less power than those who lampoon them.

So much for my alleged bias. What about Kilgore’s second claim? Kilgore writes:

And in his recent Salon essay arguing that the Tea Party movement is an essentially Southern phenomenon, his prejudices blind him to a rather important and unprecedented phenomenon: the virtual disappearance of geography as a significant factor in the ideological character of the Republican Party.

If the Republican Party has been so thoroughly Southernized that the traditional obsessions of Southern conservatives like Darwinian evolution and states’ rights are now themes of the national GOP, does that really show "the virtual disappearance of geography as a a significant factor in the ideological character of the Republican Party"? It seems to me it shows the triumph of the Southern version of conservatism over the Midwestern Robert Taft version and the Californian Nixon-Reagan version.

My argument is supported by a study of Tea Party members by scholars who presumably are not out to get the South -- they are at Sam Houston State University in Huntsville, Texas:

In fact, the role that antigovernment sentiment in the South plays in Tea Party movement support is the strongest in our analysis.

In further defense of my thesis about Southern influence on Tea Party conservatism, I would like to call another expert witness…Ed Kilgore himself. Last February in The New Republic, Kilgore wrote an essay entitled "Dixie Madison: Republicans Want Wisconsin to Become Just Like the South, which read in part:

Students of economic development will recognize it as the "smokestack-chasing" model of growth adopted by desperate developing countries around the world, which have attempted to use their low costs and poor living conditions as leverage in the global economy. And students of American economic history will recognize it as the "Moonlight and Magnolias" model of development, which is native to the Deep South.

…[T]his was the default model of economic growth in Southern states for decades -- as the capital-starved, low-wage region concluded that the way it could compete economically with other states was to emphasize its comparative advantages: low costs, a large pool of relatively poor workers, "right to work" laws that discouraged unionization, and a small appetite for environmental or any other sort of regulation. So, like an eager Third-World country, the South sought to attract capital by touting and accentuating these attributes, rather than trying to build Silicon Valleys or seek broad-based improvements in the quality of life. Only during the last several decades, when Southern leaders like Arkansas’s Bill Clinton and North Carolina’s Jim Hunt called for economic strategies that revolved around improving public education and spawning home-grown industries was the hold of the "Moonlight and Magnolias" approach partially broken. And now it’s back with a vengeance, but no longer just in the South.

Members of the modern Republican Party, and the "Tea Party movement" in particular, gravitate naturally toward models of growth that treat public programs and investments as mere obstacles in the path of dynamic corporate "job creators." Many look South in admiration: Just last week, Minnesota Tea Party heroine and possible presidential candidate Michele Bachmann visited South Carolina and told an audience that she was happy to join them in a "GOP paradise."

That was Ed Kilgore a few months ago in February, before, according to him, any mention of the Southern influence on the Tea Party became bigoted Scots-Irish-bashing. And here is the same Ed Kilgore in The New Republic only a few weeks ago, on July 11, writing a piece entitled "'Teavangelicals': How the Christian Right Came to Bless the Economic Agenda of the Tea Party":

ON AN INSTITUTIONAL LEVEL, the merger of Christian Right and Tea Party interests is remarkably advanced…..After examining the beliefs of the contemporary Christian Right, candidates like Bachmann and Perry seem less like pols cleverly straddling factions and more like leaders of a single constituency. In particular, the fiery "constitutional conservatism" espoused by many of them reflects a belief in a God-given Founders’ design that equally demands limited government, absolute property rights, a ban on abortion (including some forms of contraception) and same-sex relationships, the right to a Christian education, a stern attitude towards economic "losers," and hostility to foreign countries other than Israel.

Ed Kilgore’s argument about the South and the Tea Party is not just with me; it’s with himself.