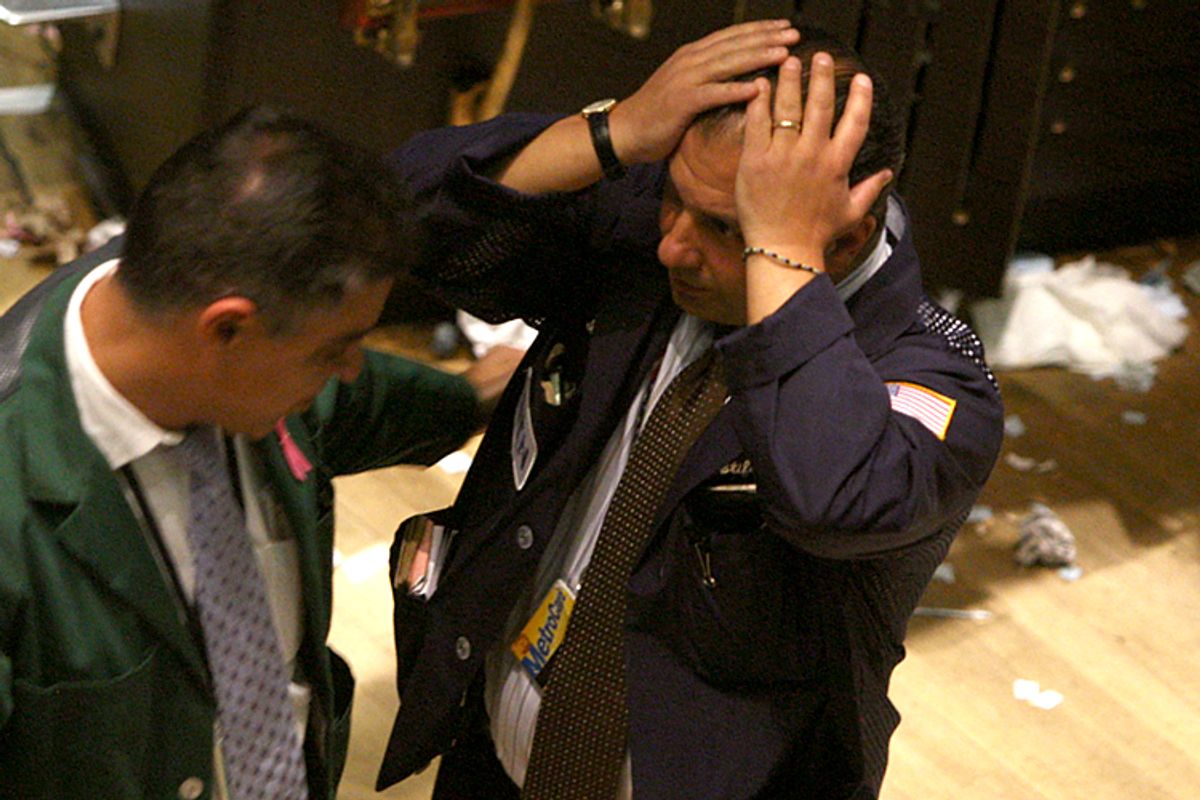 More news reaffirming the idiocy of the American political system: On Thursday, gathering worries about a slowing U.S economy and a rapidly worsening sovereign debt crisis in the European Union provoked a global stock market meltdown. At 1 p.m. ET, the Dow Jones industrial average had fallen by 2.28 percent, down 271 points At one point, the index was down a whopping 370 points, wiping out all its gains for the entire year. Even more alarming, the yield on a U.S. 10-year bond had fallen below 2.5 percent -- a clear sign that investors everywhere are terrified. And all of this is happening after a month in which Congress and the White House occupied themselves by hammering out a deficit reduction plan for which the best-case scenario is that, in the short-term, it will only slow U.S. economic growth down a little bit.

The worst-case scenario? We're looking right at it. For very good reasons, the global investor community has concluded that the United States is either unwilling or powerless (or both) to take any aggressive steps to counteract a growing economic slump. Remember the fearsome  bond vigilantes? Right now they are gibbering in fear in the basement, stocking up on bottled water.

In the past three years we've often seen big intra-day rebounds from early stock market plummets, as bargain hunters jump into the fray to snatch good deals.  So there's no telling where things will end up at the closing bell. But the U.S. stock market has now been slumping sharply for two weeks, fueled by a succession of negative economic indicators and a growing sense in Europe that the measures taken so far to contain the problems in Greece and Portugal from spreading to other members of the EU are not working. The slide was interrupted briefly on Wednesday after hints that the Federal Reserve might restart its quantitative easing stimulus program. But Thursday morning's global sell-off marked the sharpest market drop since June 2010, and reawakened bad memories of the destabilizing moments immediately following the collapse of Lehman Brothers in September 2008.

Because while the U.S. has been focused exclusive on internecine political stuggle, Europe has been crumbling.

The selloff took hold after the European commission president warned that the crisis in the eurozone was threatening to engulf Italy and Spain. Fears over the health of the global economy, and predictions that America could slide back into recession, also helped to drive the latest bout of heavy selling....

The scenes were reminiscent of the worst days of the financial crisis, three years ago.

But there's actually a big difference between now and three years ago. Three years ago, governments around the world took strong action to counteract financial panic and the slide toward a new Great Depression. We can and will debate the merits, design and implementation of those actions -- TARP and the Obama stimulus, the reliance on tax cuts at the expense of direct infrastructure spending, etc.  -- but at the time, there was a majority consensus that government should attempt to do something.

But now the game has changed. There will be no new fiscal stimulus. The European Union may be scrambling to figure out how to bail out its constituent members, but it is difficult to imagine the U.S. assisting in any major effort to stabilize markets, outside of another effort by the Fed to inject even more liquidity into the system. The critics who argued that the best solution to the crisis of 2008 was to let beleaguered financial institutions crash and burn may get their chance this time around. After the Budget Control Act of 2011, the U.S. government has essentially handcuffed itself to a chair.

Of course, if Wall Street is convinced no help is coming, that provides even more impetus to sell, which in turn further fuels the sense of panic. Once again, all eyes now turn to Friday's U.S. government jobs report. A bad number there, and today's sell-off might seem like just another blip.