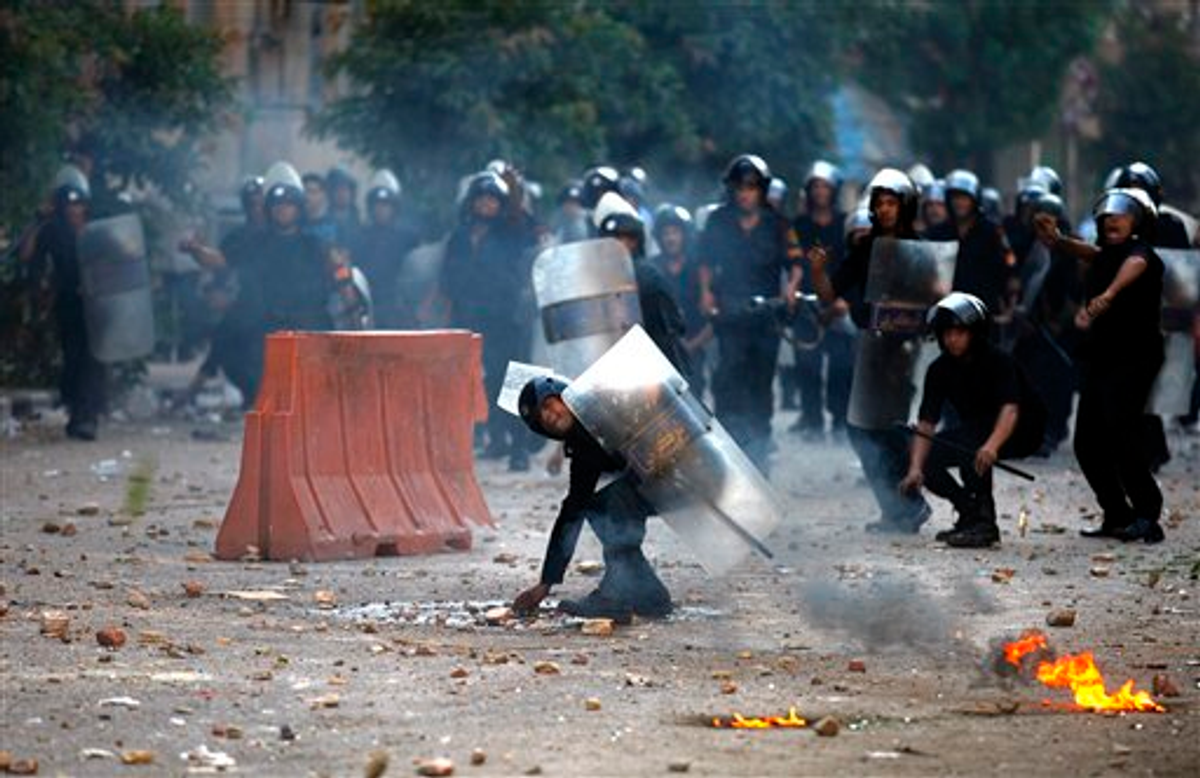 Egyptian riot police and demonstrators throw stones at each other during clashes in Cairo, early Wednesday, June 29, 2011
--

CAIRO, Egypt -- A middle-aged man posing next to a burned-out police car in Cairo's Tahrir Square in February, at the height of Egypt's revolution, flashed the victory sign for the camera.

The Brazilian artist Carlos Latuff depicted the same man in a cartoon published on July 21. The cartoon shows the man lying on the sidewalk wearing a gray suit, frowning. A uniformed soldier has tripped him with a rolled-up newspaper.

The man, Hazem Abdelazim, was supposed to become Egypt's new communications minister on July 21. He would have been the only revolutionary in a civilian cabinet that has so far struggled to gain the trust of the protesters in Tahrir Square. A day before the swearing-in ceremony, however, his name was suddenly withdrawn from consideration.

The official statement referred to "security reasons." A tabloid newspaper reported at the time that Abdelazim had suspicious business ties to Israel. The tabloid story turned out to be untrue, but Abdelazim lost the seat nonetheless.

In the days after the sacking, speculation was rife about what particular statement had rubbed some unnamed high-up official the wrong way, which led to the smear campaign and his eventual dismissal. Perhaps it was the one about how all public officials should make their salaries public. Or, maybe it was when Abdelazim used the word "corrupt" on television to describe certain judges. Promising voting rights for Egyptians living abroad, maybe?

Abdelazim admits that these subjects are touchy, and that he was being provocative on purpose.

"I wanted to test the water and see if this kind of speech would be tolerated in the interim government," Abdelazim said from his office in Smart Village, a fast-expanding and slightly surreal oasis of neat lawns and mirror-windowed tech companies in the desert outside of Cairo. He chose his words carefully.

"Perhaps it wasn't the right time for me to be in the cabinet, at this stage of the revolution. That's how I'm taking it. Whoever wanted me out, succeeded, and maybe it's better that way."

The relationship between Egypt's opposition movements and the military council has grown increasingly tense in the five months that have passed since the revolution succeeded in forcing long-time leader Hosni Mubarak to resign.

Activists accuse the generals of silencing their opponents with Mubarak-style violence and haphazard military trials. The military council blames the protesters for creating strife among Egyptians and deepening the economic crisis.

Indeed, many Egyptians are tired of the ever-present protests. When soldiers emptied the highly symbolic Tahrir Square on Monday, groups of neighbors gathered around and cheered.

Caught trying to balance the two sides is the interim civilian cabinet, which is led by Prime Minister Essam Sharaf. Sharaf has tried to placate activists while at the same time rarely challenging the ruling military council's decisions.

Abdelazim is well respected among activists in Tahrir Square. A year before the revolution, he quit his job as a junior minister and, despite threats, joined the anti-Mubarak National Association for Change founded by Mohamed ElBaradei, the country's leading opposition leader. His participation in the cabinet would have improved its image in the eyes of protesters.

He is careful to avoid speculation about the people behind his sacking, but he wants to make one thing clear: He does not think that the pressure came from within the civilian cabinet.

"Sharaf may not be a fully empowered man, but he is an honest man, and we're already seeing good changes coming from this cabinet," Abdelazim said.

Two days after Egypt's new cabinet was sworn in, without Hazem Abdelazim, a knife-wielding Mubarak supporter was dragging digital rights activist Amr Gharbeia by the ponytail through the streets of Cairo.

"We caught a spy," the man told onlookers. Gharbeia had been participating in a demonstration against the military council.

As soon as Gharbeia was captured at the protest and handed over to the police, websites calling for his execution started popping up on the internet. Just like Hazem Abdelazim, Gharbeia was accused of liaising with Israeli spies. He was released the next morning after a tour of Cairo's police stations and interrogation rooms.

Only a few hours before Gharbeia's kidnapping, the military council had declared that two of Egypt's largest protest groups -- Kefaya and the April 6 Movement -- were founded by wealthy foreign meddlers or at least receiving support from them. Gharbeia says that his captors seemed to be aware of this statement, and influenced by it.

"The military council has only recently started accusing their opponents of being foreign spies. The rhetoric itself is actually very familiar, since the Mubarak regime used it a lot," Gharbeia said.

"The striking thing is that back then this tactic was used both against Kefaya and April 6 Movement. This tells you that, even after the revolution, the perceived enemy is still the same."

Garden City, the leafy neighborhood south of Tahrir Square, is one of the very few places in Cairo that offer some respite from the oppressive heat of summer afternoons. Gharbeia strolled on the meandering streets in his casual garb: long hair, a black t-shirt and recycled army bag. His office at the Egyptian Initiative for Personal Rights is located on one of these old and oft-renamed streets.

Gharbeia is worried about the inflated role that the state security and the military continue to play in post-revolution Egypt.

"For example, the majority of the members of the board that governs the National Telecommunication Regulatory Authority come from the security authorities and the military. That's an awfully strong security connection for an entity that should be simply working for the good of the industry and consumers. The law is being reviewed now, but no one tackles this issue."

Despite Egypt's economic troubles, Smart Village appears to be growing. New companies are moving in, and even more desert sand is being covered with manicured lawns and rows of palm trees.

The buildings are nearly identical, and the logos on them are familiar. Many of Smart Village's foreign companies have recently had to explain their involvement in Middle Eastern politics. Vodafone allowed Hosni Mubarak's government to send mass text messages to their Egyptian customers in February, ordering them to stay away from the protests. Nearby, another block belongs to Nokia Siemens Networks. They've apologized for selling surveillance equipment to the Iranian government ahead of the bloody uprising of 2009.

The Ministry of Communications and Information Technology is here, too. It is located only a stone's throw away from the Technology, Innovation and Entrepreneurship Center where Hazem Abdelazim works.

When Abdelazim was still trying to defend his post in the cabinet, he called a former colleague to ask for help responding to the tabloid's accusations. Soon after, the colleague's phone rang again, and an anonymous male voice told her not to get involved.