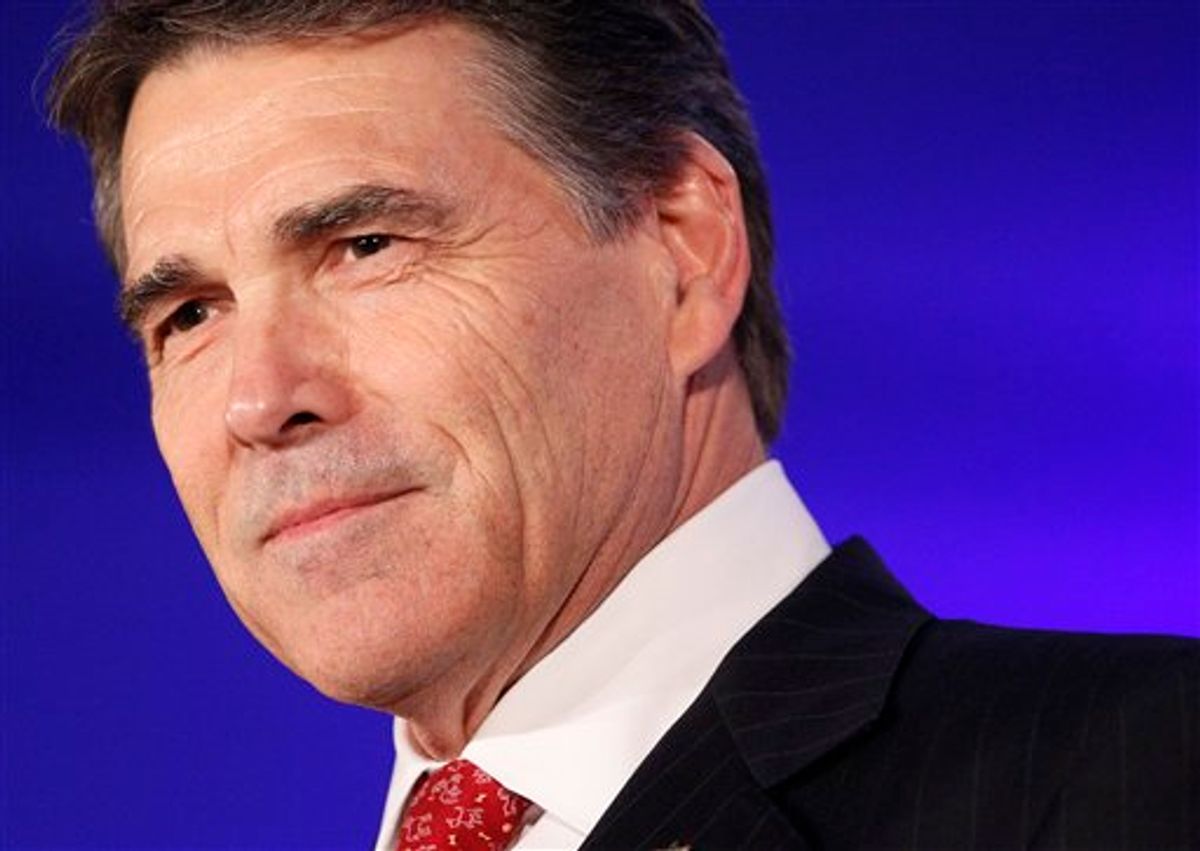 FILE - In this June 18, 2011 file photo, Texas Gov. Rick Perry speaks at the Republican Leadership Conference in New Orleans. Should Perry conclude that voter discontent has left him an opening to enter the presidential race, the longtime Texas governor would be among the GOP field's most conservative candidates. (AP Photo/Patrick Semansky, File) (AP)
--

Rick Perry, the Texas governor who may soon enter the GOP presidential race, is an outspoken critic of stem cell research. Earlier this year he claimed that under the Obama administration, stem cell research was "turning the remains of unborn children into nothing more than raw material."

It is perhaps surprising to learn, then, that Perry himself was injected with stem cells last month to treat a recurring back injury, as the Texas Tribune revealed. However, Perry was treated with adult stem cells from his own tissue, not embryonic stem cells.

The Texas Tribune points out that Perry's procedure was nonetheless experimental and controversial: it isn’t FDA approved, has mixed evidence of success and can cost tens of thousands of dollars (and is not covered by insurance). Researchers have also said that "despite the great potential adult stem cells may have, so far they've seen nothing more definitive than the so-called 'placebo effect'."

On Wednesday, a spokesperson for Perry said that the governor's "innovative" procedure had been "successful" and The Tribune notes that Perry's Emerging Technology Fund has already pledged millions of dollars to adult stem cell research.

Although still experimental, adult stem cell therapy is not embroiled in the political quagmire that surrounds embryonic research -- a hot button issue for pro-life advocates. That is not to say that Perry's public endorsement of adult stem cell research won't have political fallout or consequences for the scientific community.

An article in the Christian Post Thursday is illustrative of this. It notes that according to pro-life advocates, "embryonic stem cell research, besides being immoral, is unnecessary due to the advances in adult stem cell research."

Perry's adult stem cell success story will no doubt serve as a useful weapon in the highly politicized fight against such research.