When antibiotics no longer work

Scientists fear the growth of "super-bugs" in livestock, and worry that meat recalls could become much more common 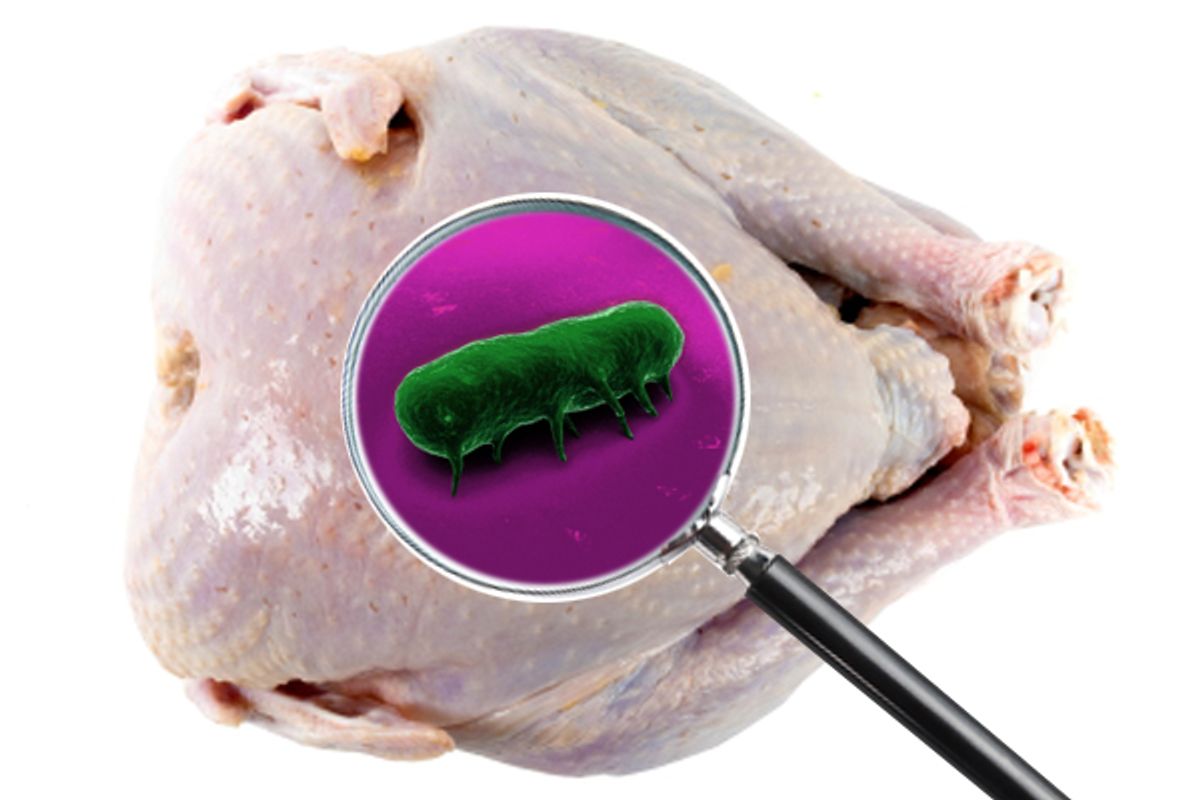 Turkeys are flying off the shelves as Cargill races to recall 36 million pounds after a salmonella outbreak in California was tied to the company's poultry.
--

There may be nothing more viscerally unsettling than the idea that our food is tainted and could make us seriously ill. Those anxieties were stoked this morning when Cargill, the third-largest turkey producer in the country, announced the recall of 36 million pounds of poultry for fear of salmonella contamination. The scare was precipitated by an outbreak in California -- which left at least one person dead and more than 70 sick -- which was traced back to Cargill's products. The recall is one of the largest recalls of meat in American history.

What's particularly alarming is that the salmonella in question is resistant to antibiotics, at a time when drug-resistant bugs, of all stripes, are generating increased public attention. Just as Cargill was pulling its meat off of store shelves, French scientists released a report detailing the emergence of another drug-resistant strain of Salmonella, called "S. Kentucky," in Europe. (The California strain is "S. Heidelberg.") S. Kentucky made nearly 500 people sick across the continent between 2000 and 2008, and researchers suspect that it hopped over the pond to the U.S. and Canada.

The threat isn't only limited to poultry, either. In May, British researchers detected a new type of drug-resistant staph bacteria -- MRSA, a well-known menace in hospitals that has more recently spread into non-clinical settings -- lurking within milk products.

Taken together, these cases highlight an area of growing concern among scientists and critics of the agricultural industry.

The birth of "super-bugs"

While the source of the current salmonella outbreak remains murky, we can reasonably speculate about the genesis of the bug's drug-resistance: the reportedly endemic overuse of antibiotics by the agricultural industry.

Drugs are given to livestock for multiple reasons. An obvious one is for the treatment of diseases. When livestock are sick, veterinarians administer a significant dosage in hopes of  eliminating the animal's affliction. Another reason is preventative. Animals in close quarters are more susceptible to infection, so farmers will often administer medicine to healthy animals in order to nip anything nasty in the bud. Most controversially, though, members of the agricultural industry use antibiotics for the express purpose of promoting livestock growth.

It's a well-known, if not entirely intuitive, fact that healthy animals who are fed small, or "sub-therapeutic," doses of antibiotics will wind up larger than their unmedicated counterparts. In many such cases, these drugs are given to livestock through their feed or water, and without the prescription or oversight of a veterinarian, according to Dr. Gail Hansen, a senior officer at the Pew Campaign on Human Health and Industrial Farming.

An estimated 80 percent of all antibiotics in the U.S. are given to food-producing livestock, according to the FDA. And approximately 83 percent of that medicine is "administered flock- or herd-wide at low levels for non-therapeutic purposes, such as growth promotion and routine disease prevention," according to a lawsuit filed against the FDA in May. These figures could have very real consequences for public health, because the Catch-22 of this antibiotic abandon is the widespread development of drug-resistant bacteria, colloquially referred to as "super-bugs."

"Bacteria can learn to become resistant," Hansen said. "And when we give low levels of antibiotics, it's a perfect formula for getting resistant bacteria. [The dosage is] not enough to kill them, and it's a case of 'whatever doesn't kill you makes you stronger.'"

The drugs used vary, but they are, in many cases, significant to the treatment of human diseases. As the Independent notes:

[T]hree kinds of drugs described by the World Health Organization as "critically important in human medicine", are being used on animals as much as 800 percent more than a decade ago, despite a fall in the number of farm livestock.

And the result? According to a report published by the FDA in 2009, nearly 80 percent of the salmonella found in ground turkey meat was resistant to at least one type of antibiotic -- while 26 percent were immune to more than three. Overall, the bug appeared in more than 10 percent of all the turkeys tested. And the repercussions, should the practice of using sub-therapeutic doses continue, could be disastrous:

In 2006, the European Union banned all use of antibiotics on livestock for growth promotion. And the U.S. Senate will consider similar legislation this year. Sen. Dianne Feinstein, D-Calif., reintroduced the "Preservation of Antibiotics for Medical Treatment Act" last month, which would significantly rein in agricultural drug use, and strictly prohibit the application of sub-therapeutic doses of drugs that have benefits for humans.

Still, the agricultural industry disputes data about its use of antibiotics and the rise of super-bugs, and it has aggressively fought efforts to legislate the matter. As a result, it's hard to tell how far the legislation might proceed.

What you can do to protect yourself

Dr. Martin Wiedmann, a professor of food science at Cornell University, points out that the most important way to keep yourself safe from a salmonella infection is proper food preparation:

This outbreak wouldn't have occurred if people would have appropriately cooked and handled raw food in the kitchen. It's important to reiterate that you need to cook food to the appropriate temperature -- which for turkey is 165 degrees Fahrenheit. Always use an accurate meat thermometer to measure the temperature inside the product. You also have to be careful about cross-contamination. When you use utensils or your hands or plates to touch raw product, don't use them again before washing. Every surface needs to be clean. We are all responsible for public health.

Consumers are advised to check for Cargill products in their homes. The AP has put together this helpful breakdown: