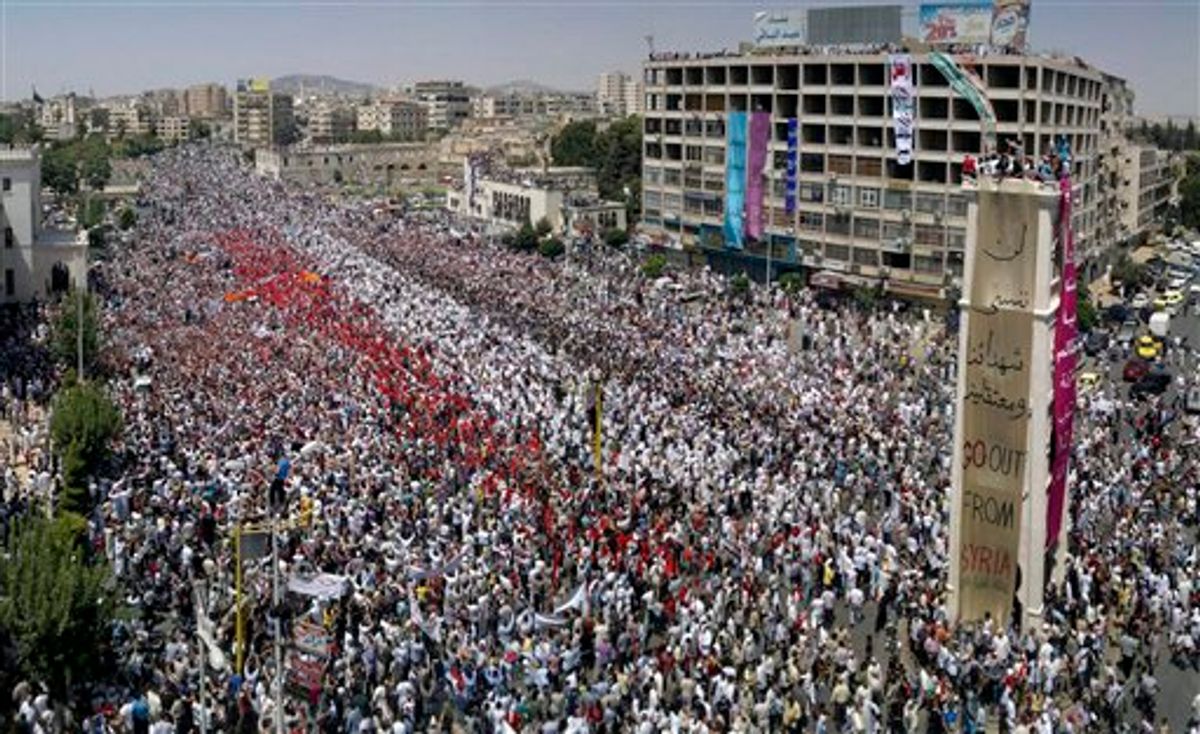 FILE- In this Friday, July 22, 2011, a citizen journalism image made on a mobile phone and provided by Shaam News Network, Syrian anti-regime protesters gather during a rally in al-Assy square in the western city of Hama, Syria. The Arabic on banner reads:"we will never forget our martyrs and prisoners." Activist Ibrahim Qashoush's lyrics moved thousands of protesters in Syria who sang his jaunty verses at rallies, telling President Bashar Assad, "Time to leave." So when his body was dumped in the river flowing through his hometown, his killers added an obvious message: His throat was carved out. Qashoush's slaying underlines how brutal Syria's turmoil has become as authorities try to crush a persistent uprising. His fellow activists are convinced he was killed by security forces and fear it could mark a new campaign to liquidate protest leaders.(AP Photo/Shaam News Network, File) EDITORIAL USE ONLY, NO SALES, THE ASSOCIATED PRESS IS UNABLE TO INDEPENDENTLY VERIFY THE AUTHENTICITY, CONTENT, LOCATION OR DATE OF THIS HANDOUT PHOTO (AP)
--

After months of deadlock, the U.N. Security Council finally responded

The trigger for the council to act was the military assault launched by the Syrian government over the weekend against the city of Hama, 130 miles (210 kilometers) north of the capital Damascus, which has a history of defiance. The offensive by Syrian forces, backed by tanks and snipers, was continuing Wednesday with reports of at least 100 dead in four days.

The presidential statement adopted by the Security Council calls on Syrian authorities to immediately end all violence and launch an inclusive political process that will allow the Syrian people to fully exercise "fundamental freedoms ... including that of expression and peaceful assembly."

Assad's regime has been using force since mid-March to put down citizen protests demanding political reforms, and activists say some 1,700 civilians have been killed. The Syrian leader has promised reforms, but the council expressed regret at "the lack of progress" in implementing them and called on Assad to keep his word.

European and U.S. council members had been pressing for a legally binding resolution that would strongly condemn Syria. But Russia, China, India, Brazil and South Africa had been arguing that condemnation wouldn't promote negotiations, promised reforms by Assad, and an end to the violence.

They also feared that a resolution might be used as a pretext for armed intervention against Syria. They point to a council resolution allowing the use of military force to protect the civilian population in Libya which, they argue, has been misused by NATO to justify five months of airstrikes against Moammar Gadhafi's regime.

The Europeans and the U.S. agreed to a weaker presidential statement, which still becomes part of council record, in order to get all 15 council members to sign on.

British Foreign Secretary William Hague said the statement "demonstrates the rising international concern at the unacceptable behavior of the regime and shows that president Assad is increasingly isolated." French Foreign Minister Alain Juppe called the statement "a turning point in the attitude of the international community" and said Syria must now halt the attacks and implement reforms.

Lebanon, a neighbor and close ally of Syria, didn't block adoption of the statement. But Lebanon's deputy U.N. ambassador Caroline Ziade invoked a procedure not used since 1974 by the Americans and 1976 by China, disassociating the country from the statement after it was read at a formal council meeting by the current president, India's U.N. Ambassador Hardeep Singh Puri.

Ziade said that "while we express our deep regret for the loss of innocent victims," the presidential statement "does not help in addressing the current situation in Syria." She reiterated that whatever affects Syria affects Lebanon, and vice versa.

Puri told reporters that "what is most important ... is that the council was on one page and completely unanimous" in the message it was sending to Syria, a view echoed by Britain's U.N. Ambassador Mark Lyall Grant and U.S. Ambassador Susan Rice.

While the U.S. wanted a resolution, Rice said, "the most important thing to us was strong content and a clear and unified condemnation."

"We didn't want a split council and we didn't want a weak statement," she said in a phone call with reporters. "I think the Assad regime was counting that the Security Council would be unable to speak and that they would not be condemned."

Speaking on behalf of France, Germany and Portugal as well as Britain, Lyall Grant said the statement "delivers a clear, unambiguous and united message to the Syrian regime: barbarous acts must cease in Syria."

"The Syrian people have a right to liberty, democracy and justice," he told reporters. "Damascus must respond quickly and unequivocally to these legitimate aspirations."

The presidential statement calls for Secretary-General Ban Ki-moon to update the Security Council on the situation in Syria in a week, and Lyall Grant made clear that "we'll expect to see a change of approach by Syria in the next seven days."

Both Puri and Lyall Grant said there could be further Security Council action if the violence doesn't end.

The secretary-general welcomed the statement "as a clear message of the international community," calling events of the past few days "brutally shocking."

Diplomats said one of the key issues during negotiations had been how to address the violence against unarmed civilians as well as attacks on Syrian security forces. The Europeans and the U.S. insisted they should not be equated and that civilians could not be condemned for defending themselves against their attackers.

In June, Human Rights Commissioner Navi Pillay called for a full investigation of alleged abuses by Syrian authorities against the protesters.

Associated Press writer Anita Snow contributed to this story from the United Nations.