The new era of hostage politics

Why would the GOP give up on its bullying, anti-democratic legislative tactics after they just worked perfectly? 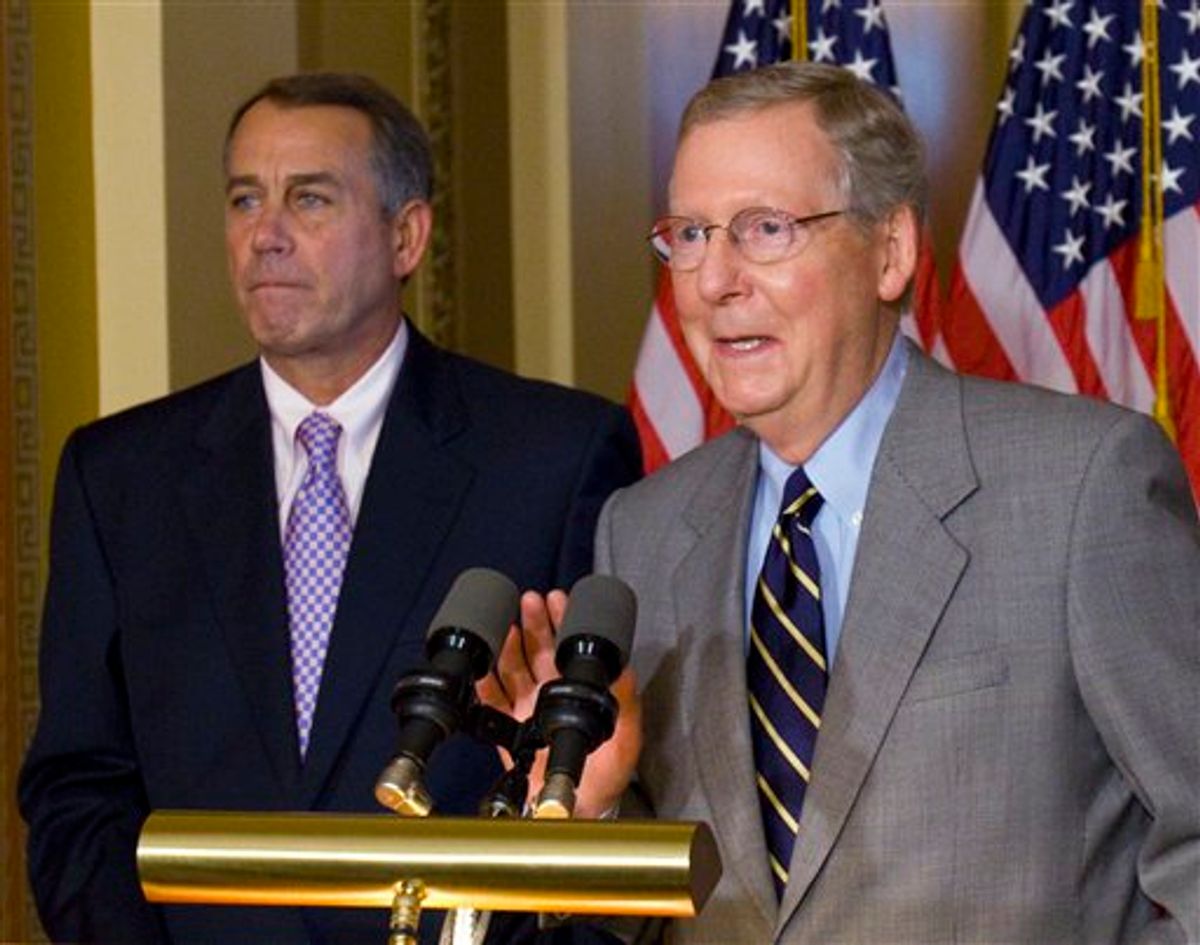 When I arrived in Washington this past Sunday, just as the debt ceiling crisis was approaching its climax, all the flags surrounding the capital’s Union Station stood at half-mast. I blackly joked with my brother and sister-in-law that maybe they’d been lowered to mark the death of the New Deal. (In fact, they honored the recent passing of former Joint Chiefs of Staff Chairman John Shalikashvili.)

As for those throngs of sightseers, defying the malarial heat and clogging the DC streets and sidewalks? I imagined them engaged in that phenomenon known as "last chance tourism" -- getting to a location before it disappears, like the melting glaciers of the Rockies.

But my bleakest fantasies aside, Washington and America still stand, although the shining city on a hill Ronald Reagan liked to extol has been graffitied with the intemperate sloganeering and mudslings of Tea Partiers and others of the right who believe the best government is none at all, and selfishly would have those in need huddle, jobless and hungry, in the dark. (What’s the old joke: How many laissez-faire economists does it take to screw in a lightbulb? None -- the market will take care of it.)

Like so many progressives, I tried, really tried to find a silver lining in the deal that finally was brokered, much as one occasionally hears news reports on the "upside" of global warming. (Wider shipping lanes in the Arctic -- hooray!) Programs for the poor seem to be protected, for now. Medicare cuts allegedly don’t affect beneficiary payments. The Bush tax cuts for the wealthy still expire in 2013! (I’ll believe it when I see it.)

All cold solace at best. Because it’s impossible not to shake the idea that in their unthinking zeal to slash spending, carve down the deficit, and destroy the opposition, Republicans are like the guy drilling holes in the hull of his foundering lifeboat to let the water out -- despite the objections and pleas of the other passengers.

Which reflects a larger problem. As Jonathan Bernstein wrote at the Washington Post's Plum Line blog:

"… The GOP’s incentives are skewed. Rather than caring about policy, they appear to care more about symbolism, such as a Balanced Budget Amendment, than about actual policy. Rather than caring about cutting the best deal they can get, they appear to care more about proving their loyalty to the cause (they refused to deal on health care even though so doing might have gotten them more of what they wanted)…

"This requires them to oppose Democratic presidents regardless of what it means in substantive gains or losses. The result is that Republicans wind up following the lead of hucksters and talk show hosts, even when it leads them to strange places. And that, not anything inherent in Congress even in polarized times, winds up yielding a dysfunctional legislative process."

Like it or not, arcane and abused as some of its procedures are, corrupted by money and influence, complicated beyond reason and in gross need of reform, what’s left of our system only works if there are rules of procedure and behavior. Sometimes those rules are unwritten, more tradition than codified in law, mutually accepted by all concerned. Lose that, as we now have, and everything else goes straight to hell.

The don’t-give-a-damn, slash-and-burn, hostage taking methods used by Republican leadership in the debt fight are distressingly undemocratic and seriously undermine the remnants of this fragile, representative republic. Worth it, Senate Minority Leader Mitch McConnell said the other day. In fact, he could imagine a repeat performance.

And so they will keep doing it again and again because, as we’ve just seen, it works. President Obama and many of his fellow Democrats have let them get away with it and even acted as accessories to the crime, caving in and buying into the notion that at a time when further government stimulus is crucial for jobs and growth, the main thing to do is to cut spending. It wouldn’t surprise me if future legislation from the GOP came in the form of ransom notes, words and letters torn from newspapers and magazines and pasted on the page, more threat than law.

In the immediate wake of the debt ceiling war, the impasse over the Federal Aviation Administration -- now temporarily broken in the face of public opinion, nearly 75,000 put out of work and potentially hundreds of millions in lost tax revenue -- is ample evidence of Republican intent. When Democrats pushed back against an attempt to overthrow a National Mediation Board ruling making it easier for airline (and railroad) workers to unionize, the House refused to reauthorize FAA funding, normally a routine decision, then offered a puny, one-month extension but furthered the blackmail by threatening to shut off subsidies for rural air service in the home states of key Democratic Senators Harry Reid, Jay Rockefeller (chairman of the Senate Transportation Committee) and Max Baucus (chairman of the Senate Finance Committee).

New York Senator Chuck Schumer said, "Airports are the economic engines of the small communities around the country, and that economic engine is now stuck in neutral… [Republicans] have taken brinkmanship again one step too far." Even Texas Republican Senator Kay Bailey Hutchison said the move was "not honorable," but when Rockefeller cried foul, the man who added the rural airport provision, Republican Congressman John Mica, chairman of the House Transportation Committee, disingenuously claimed: "It’s just a tool to try to motivate some action to get this resolved."

In other words, our way or no highway in the sky. One reader of the website Talking Points Memo wrote, "They don’t care about the will of the people, they don’t care if government works (because they have convinced themselves that it’s inherently bad) and they would rather have the country go down the tubes than not get what they want."

With appropriations legislation due for debate after the summer recess ends, there’s much, much more of this kind of tactic to come. House Minority Leader Nancy Pelosi says she has a secret plan to defeat future hostage taking but "if I were to tell you… it would be defanged."

Unfortunately, when a secret plan is announced in public in advance of execution not only is it no longer secret, it usually turns out there wasn’t much of a plan in the first place. We’ll see.

One thing I do know: the only way to defeat truculent bullies and extremist ideologues is to fight back, stand up, say no. And much as it may go against your accommodating soul, Mr. President, that means you, too. Step up to the plate.