Obama and the Democrats have to face that they're the party of government, and make government work 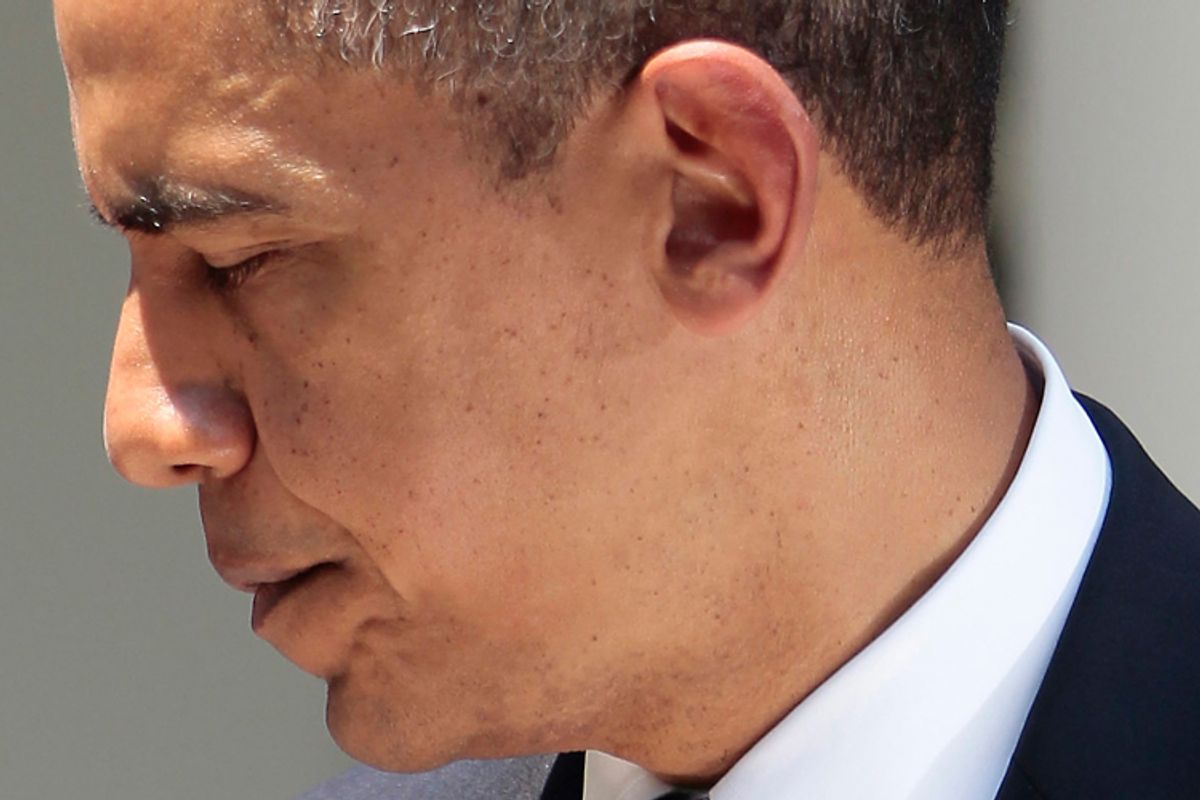 We're supposed to be relieved that the jobs picture brightened a bit in July. Yes, the private sector created 117,000 jobs, and that's a good thing. The unemployment rate went down too -- but that may be a bad thing. The decline very likely reflects more people giving up on having a job. As Andrew Leonard pointed out, the employment-to-population ratio slipped again, to 58.1 percent, the lowest level since 1983. And the anemic job growth we did see in July wasn't even enough to keep up with population growth, let alone to begin to restore the damage inflicted by recession.

President Obama took to the airwaves to acknowledge that trouble persists, but to reassure Americans "things will get better." Will Americans believe him? I doubt it. Obama staked his presidency on a debt-ceiling deal that would stave off the disaster of default, and after an epic battle, Democrats compromised almost completely with Tea Party crazies who held the economy hostage. That should have restored confidence that the economy wasn't going to collapse, right? Instead the Dow plummeted, finishing up slightly higher Friday after a day-long roller-coaster ride. Meanwhile Standard and Poor's, one of the ratings agencies that looked away from Wall Street's bad behavior in 2007 and 2008, has downgraded the rating of U.S. debt, in large measure because of the insanity of the debt-ceiling battle.

The real confidence crisis doesn't lie with corporate America. It belongs to the Democrats. They are the party of government, and they should face it, and boldly advocate to use government to solve our problems. Instead, ever since the chaos of the '60s and '70s they've tried to insist they don't like government any more than the Republicans do -- and no one believes them. Maybe the dishonesty about their core values contributes to Americans' lack of trust.

Democrats have helped Americans live in a dream world where their success is their own: Real Americans don't get government help. This is a lie. The activities of government, going back to the days when it "purchased" North American land from other European powers and/or cleared it of its original inhabitants, created the conditions for American prosperity. In our own time, the invisible hand of government created the great middle class. The government has made all kinds of things possible through the tax code: the home mortgage deduction, for instance, isn't in the Constitution, and only two other countries have it. Our supposedly "private" system of healthcare, pensions and 401Ks was likewise created by government, again allowing companies and individuals to avoid paying taxes on those employer "benefits."

The great middle class of the 1950s and '60s grew thanks to government. The GI bill helped soldiers go to school and buy homes. Our system of public universities exploded, making college affordable to millions more Americans. On top of the mortgage deduction, the federal government made home-ownership more possible by insuring mortgages and making bankers and real-estate magnates richer. It built roads to the suburbs and extended electricity to rural and exurban areas where people couldn't have afforded to live. Not coincidentally, many of those programs excluded African-Americans or at least tolerated discrimination, leaving too many black people out of that great American dream.

Then came the disorder of the 1960s, when Democrats did the right thing and finished the work the Civil War began. Lyndon Johnson presided over not just the Civil Rights and Voting Rights Act, but the greatest expansion of government in history with Medicare, extended Social Security and the comparatively minuscule "War on Poverty." And at the very same time we expanded government, the cities and campuses exploded, and we're still coping with the trauma. Johnson's war, not his civil rights stands, produced the most disorder and violence, but in the scariness of the '60s the two were conflated -- and Democrats became the party not only of government, but disorder.

It's a supreme historic irony that America's first black president finds himself trying to heal the divisions that opened up, at least partly over race, 50 years ago. Obama is not the first Democrat to seem afraid, rather than proud, of his party's legacy. Even the most successful Democratic president of my lifetime, Bill Clinton, felt he had to declare the era of big government over. He proved Democrats could be responsible: He balanced the budget, he conducted his social policy through the tax codes with a bigger Earned Income Tax Credit as well as a big college tuition tax credit. He even ended welfare as we knew it, trying to sever the tie between his party and the undeserving poor. It didn't work. Now, in the eyes of some skeptical voters, the Democrats are not only the party of the undeserving poor, but the undeserving rich -- the friend of Wall Street and the wealthy.

Obama has tried to run away from these old problems by compromising with Republicans, by being the guy who loaded his stimulus with tax cuts even before Republicans asked for them in January 2009, and who wanted to cut more than House GOP Speaker John Boehner did in this last crisis. The only thing the president hasn't tried, to solve our nation's escalating problems, is governing like a Democrat. The president has to lay out a jobs agenda, and fight for it, even if he loses. The House GOP is forcing votes on all kinds of things that will never pass, from Paul Ryan's crackpot budget to undoing environmental regulations established under Richard Nixon, to prove their members stand for something. If the president and Democratic leaders are afraid of mounting a full-throated defense of government intervention when the private sector is failing, they shouldn't be Democrats.

Right now I'm watching CNBC's Jim Cramer, who savaged Obama as a near-socialist when he took office in 2009, screaming for the government to do something to solve the jobs crisis. Will these people ever take responsibility for creating the mess we're in? Likewise, the notion that Standard and Poor's, which enabled the banking and real estate disaster, has standing to destroy the economy a second time is absolutely surreal to me. Late Friday the firm admitted a math error at least partly led to its dire take on the economy, but it still went ahead with a downgrade to AA+. Will the president even point to the outrage of the rating agency that looked away from Wall Street wrongdoing now having such power over the economy? I hope so.

Obama and the Democrats should immediately push a jobs agenda -- extending unemployment insurance, creating an infrastructure bank, putting the unemployed to work where possible. I'm a fan of Jared Bernstein's "Fix America's Schools Today" -- FAST -- which would employ people repairing and greening public schools, but there are other good ideas. Wouldn't it be better to fight and lose than not to fight at all?

I'll be talking about all this and more tonight on HBO's "Real Time With Bill Maher."