S&P to the U.S: Your credit is no good

Why the Tea Party-friendly Republicans of the U.S. House own this epic humiliation 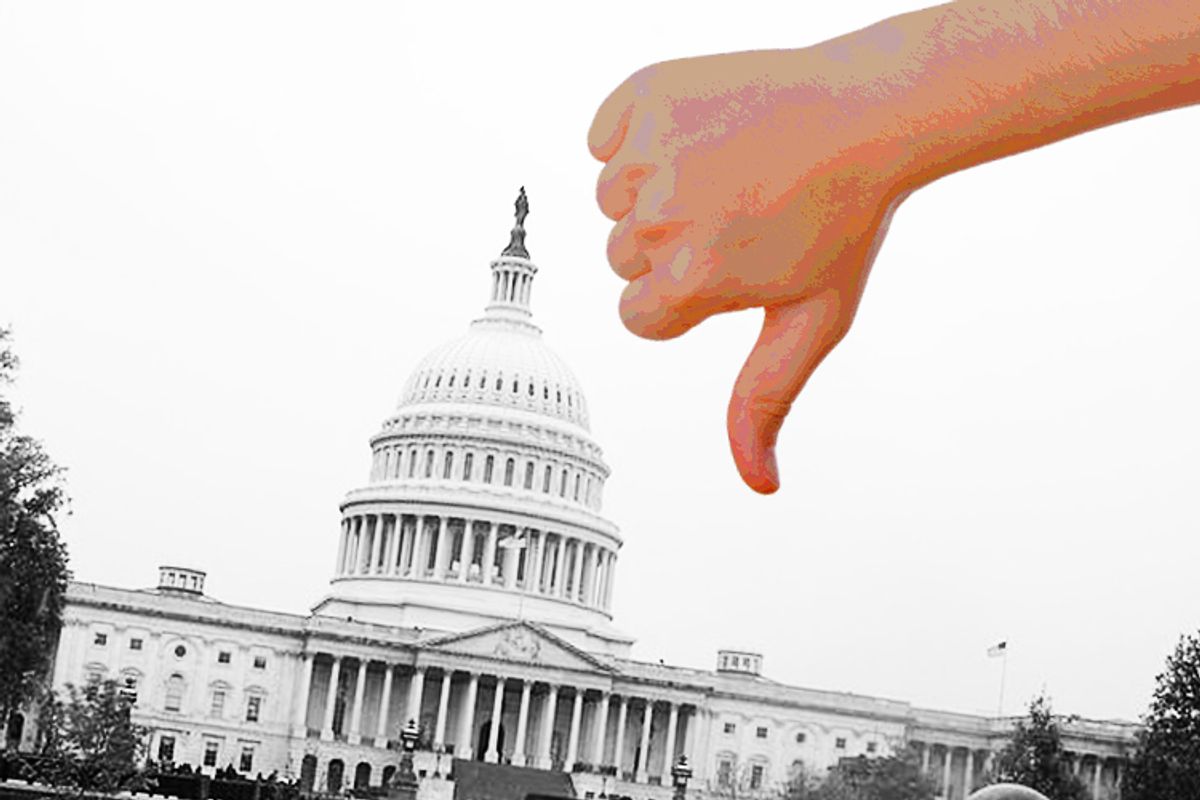 On Friday night, after a swirl of rumors and conflicting news reports that will be grist for the Washington pundit mill for years to come, Standard & Poor's downgraded the credit rating of the United States. It's a big deal, if only for the fact that the U.S., the biggest economy in the world and the sole superpower on the planet, has maintained a pristine credit rating since 1941, longer than any other nation.

There are great paradoxes inherent in this move. During these troubled times, United States Treasury bonds are still currently considered one of safest places to put your money in the world. And that may continue -- the black humor traded by financial journalists is already flying. As CNBC's John Carney tweeted, "Can't wait for headline: Treasuries Rally As Investors Flee to Safety Following Downgrade."

The practical impact of this downgrade may not immediately change anything -- U.S. Treasuries will still be desirable in an uncertain world.

It's also worth noting that two of the other big three rating agencies did not downgrade the U.S.'s credit rating when they made their own calls in recent days. The question of what exactly  a downgrade by 1/3 of the Big Three means will be a hot topic as Monday morning's market opening approaches.

There was some high controversy on Friday night as the day wound down. First, ABC News' Jake Tapper reported that a government official had told ABC that the White House was prepared for, and expecting, a downgrade. An hour or so later, numerous media outlets reported that S&P had warned the White House that a downgrade was coming, but the Treasury had pointed out a major math error in S&P's calculations, and S&P had pulled back! But fast on the heels of that news came the actual downgrade.

It's going to be fun to figure out what just happened. And we can also question, with great vigor, whether one of the credit rating agencies that played such a huge role in facilitating the financial crisis by blithely giving rank, putrid toxic waste mortgage-backed securities the highest possible rating deserves to have any power at all in reckoning the credit-worthiness of U.S finances. But let's put aside those controversies and look at a couple of paragraphs from S&P's release:

More broadly, the downgrade reflects our view that the effectiveness, stability, and predictability of American policymaking and political institutions have weakened at a time of ongoing fiscal and economic challenges to a degree more than we envisioned when we assigned a negative outlook to the rating on April 18, 2011.

Since then, we have changed our view of the difficulties in bridging the gulf between the political parties over fiscal policy, which makes us pessimistic about the capacity of Congress and the Administration to be able to leverage their agreement this week into a broader fiscal consolidation plan that stabilizes the government's debt dynamics any time soon.

I can't disagree with that assessment, and I don't think anyone else who has paid close attention to how Congress and the administration have worked together the last few months -- or years -- could disagree. Who is to blame? Well, we all our have opinions. Republicans will call this Obama's downgrade, and Democrats will call it the Tea Party's shame. Y'all can argue about it to your heart's content while I go on vacation.

But here's what I think. If Obama had gotten his grand bargain -- if the Republicans had agreed to some revenue increases in return for some entitlement cuts -- our credit would still be good. Yes, the bargain itself, from a liberal perspective, would have been a pretty bad deal, but it would have avoided this embarrassment. I don't know what the trickle-down effects of this downgrade will be, but if interest rates rise as a result, that could have wide-ranging effects on every aspect of our economy. Mortgage rates will rise, loans will be harder to get, the cost of borrowing for the United States government will go up.