They're the butt of jokes on TV, but these patients have serious problems that our healthcare system can't handle 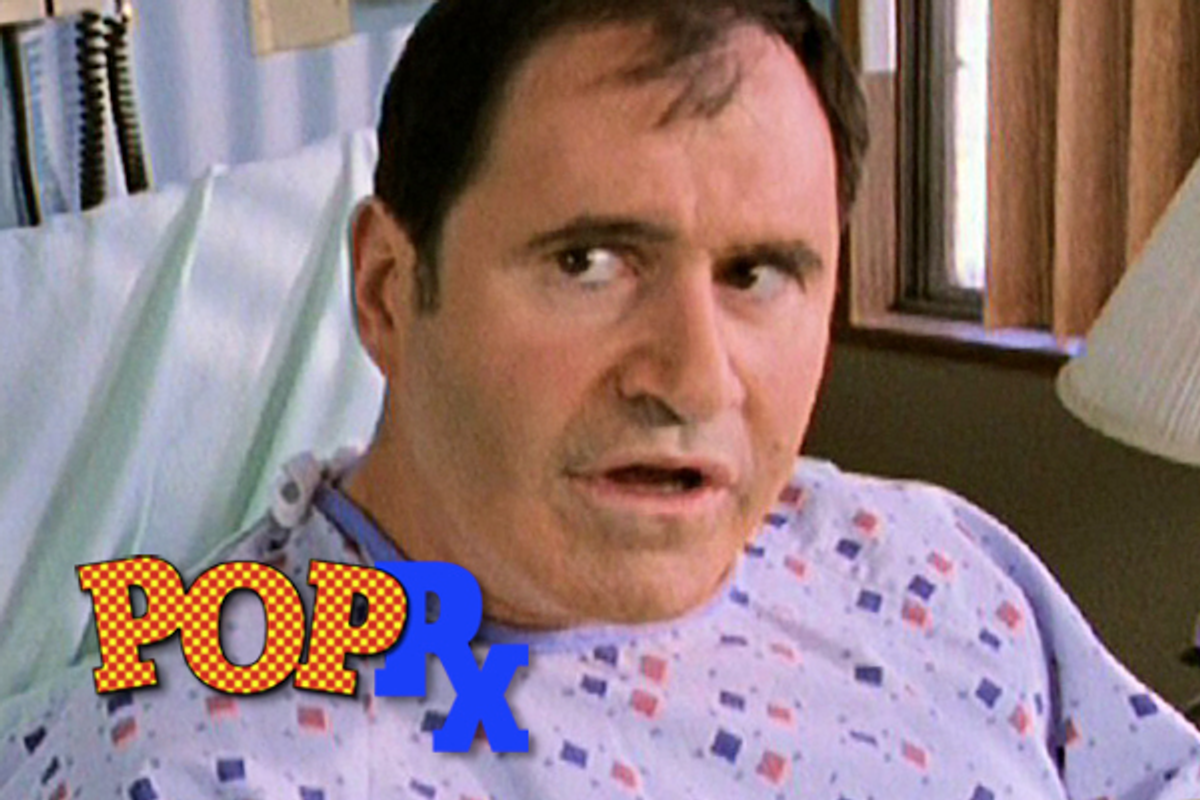 Hypochondriacs often provide comic relief in TV and film (see stubbornly bedridden Cameron at the beginning of "Ferris Bueller's Day Off" or Melman the anxious pill-popping giraffe in "Madagascar"). The doctor-patient relationship itself is also played for laughs: "Scrubs," for instance, featured a recurring character named Harvey Corman whom an irritated Dr. Cox greets in one episode with his incurable bite: "And what imaginary disease is ailing you this time, my friend?" For a physician, these sorts of patients are frustrating to deal with, but not because their problem is a joke.

Real hypochondria, which today we believe is a form of extreme anxiety connected to depression and obsessive-compulsive disorder, is serious, costly and debilitating. A brief perusal of hypochondria message boards will show you how terrifying the disorder really is. Driven by the frightening and unwavering conviction that every twinge, tingle and ache is a mortal threat, these patients can't stop calling 911, making doctor's appointments and demanding test upon test, drug upon drug. It adds up: Collectively, hypochondriacs cost our health system some $20 billion a year.

Modern culture provides fertile ground for this sort of anxiety. Google any ache or pain you might have, and you'll find a long list of life-threatening diagnoses. The term "cyberchondria" has been coined to describe those who spend too much time "e-searching" ailments. A Microsoft study revealed that half of the company's employees interrupted their day at some point to search for medical information online. More troublingly, researchers found that these searches often popped up the worst possible diagnoses. There's even an iPhone app that caters directly to the hypochondriac.

The 24-hour cycle of health news and entertainment that gives superficial information about every drug, diagnosis and disease gives hypochondriacs even more fodder. One message board commenter, for example, wrote after actress Brittany Murphy's death, which was initially believed to be caused by a heart attack, in 2009: "I have been to the cardiologist and the ER I don't know how many times complaining about my chest pains and I get the 'you're too young' speech but they still perform the test anyway! Too young for a heart attack! Huh! Tell that to Brittany Murphy. I am 31, she was 32. I'm freaking out!"

As upset as this writer is with her cardiologist's attitude, I can assure you her physicians were equally frustrated. Interacting with a hypochondriac patient puts an immense strain on the doctor-patient relationship. Hypochondriacs are desperate for us to believe that the symptoms they're experiencing are physically real, not psychologically motivated; they come to our offices desperate for validation, support and certainty. When we cannot give them any of those things, they refuse to believe our assessments and both parties drift farther apart in anger.

One patient rails on an online message board: "The deeper we dive the more we discover about how little [doctors] actually know about medicine. They have no understanding of risk factors, or root causes, or genetics ... The damn doctors are fools. All of them ... " The medical community's response is equally hostile. We routinely avoid, and even fire, hypochondriac patients from our practices. We label them with derogatory names, like "crazy," "gourd" or the more modern acronym "GOMER" (get out of my emergency room). But in the end, after hours and hours of visits and phone calls, we often find ourselves pressured into ordering tests, writing prescriptions and making referrals just the same.

Today's medical system encourages this approach of hurrying difficult patients out the door. Doctors, unlike lawyers or consultants, don't bill for their hours. Most of us get reimbursed by insurance companies for tests, and procedures, and prescriptions, often regardless of whether they're necessary. A hypochondriac on our schedule is a time and money sink. The ugly truth is that modern medicine doesn't reward those physicians -- like primary care doctors -- whose main work is to listen to and think deeply about patients and their ailments, whether they are physical or psychological.

As a pediatrician, I've had a single brush with hypochondria by proxy. My patient was a teenager with multiple minor complaints -- a little fatigue, a string of recent colds, some oral cold sores. Her mother pushed a piece of paper at me, and asked me to order a specialized test for Lyme disease, one I had never heard of. The mother, after doing Internet research and discussing the illness on message boards, was convinced that this was her daughter's diagnosis, even though her symptoms didn't suggest it. I tried over and over to reassure her, but she only waved more and more printouts at me with information to support her diagnosis.

It's this lack of faith between the hypochondriac and his or her doctor that's at the core of each party's frustration. The mother refused to believe me. For doctors, this reaction violates the deep desire we have for patients to trust us. It also erodes our confidence. As Susan Baur notes in her book on the subject: Hypochondriacs' "consistent failure to improve makes it difficult for the doctor to feel effective, just as their lack of consideration and appreciation makes it hard for him to like them and thus feel kind and friendly. Few doctors can tolerate being cast in the dual role of nasty person and impotent healer."

With the parent of my patient, I held my ground for over an hour. In the end we negotiated that I would dig into her ream of printouts later and then call her to discuss it further. It didn't take long to learn that the custom test the mother had championed lowers the bar for what constitutes a diagnosis of Lyme disease, so that essentially everybody who takes it receives that diagnosis. When I expressed my concerns to her, she insisted, "There's no such thing as a false positive Lyme test." Before I could respond, she got angry and accused me of obstructing her child's path to health. Needless to say, like countless other doctors and hypochondriacs, we parted ways.

Knowing what I know now about the nature of hypochondria, all of this was easy to foresee. The mother of this child wanted, desperately, to get her daughter a diagnosis, a grand unifying explanation for what was likely nothing more than a bunch of random ailments strung together. Had I ordered that lab test and given her this false diagnosis of Lyme disease, I would have sentenced her to 6 months of intravenous antibiotics through a surgically placed central line.

What should I have done differently? Experts (of which there are very few) in the study of hypochondria suggest the exact opposite of avoidance:

Successful long-term medical management requires a durable and trusting doctor-patient relationship ... Visits should therefore be scheduled on a regular, rather than an as-needed, basis ... A few patients may still make excessive requests for attention, in which case the physician must set limits in a non-punitive manner ... tests and specialty consultations should not be performed solely for the purpose of reassurance ... [this] must be coupled with the explicit assurance that the physician understands that such symptoms are real and not "imaginary."

Good advice, but in the time-sensitive setting of the office, with a desperate and hostile parent in your face, that's easier said than done. Unless we restructure the way our medical system works, we'll continue doing a disservice to those terrified patients who arrive at our offices convinced -- by Google, or Dr. House or the nightly news -- that they already know their life-threatening diagnosis.