The hypocrisy of "states' rights" conservatives 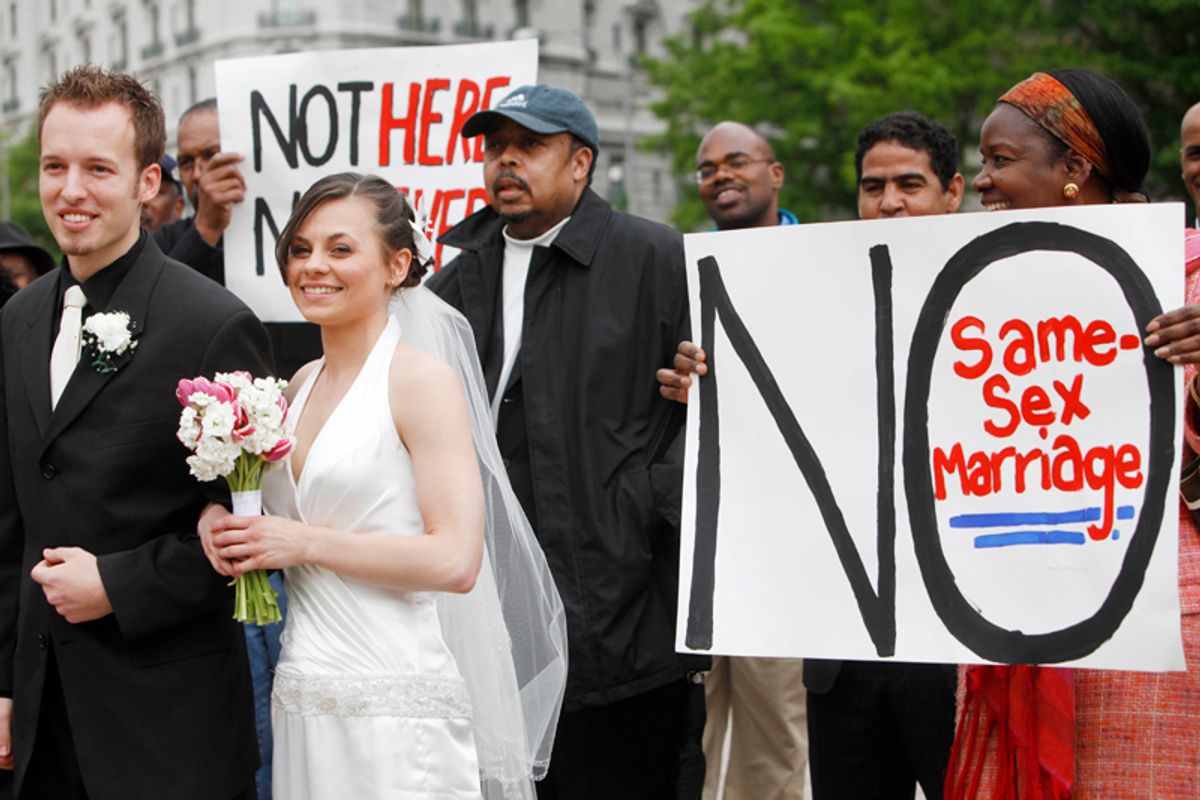 Jonathan Paul Ganucheau, 24, left, and, Denise Buckbinder Ganucheau, 26, both of Dallas, Texas, have a religious wedding ceremony performed as part of a protest against same sex marriage
--

During the last two weeks, Texas Gov. Rick Perry, by most accounts on the brink of a presidential candidacy, has reversed himself on the question of the proper venue for dealing with the two of the hoariest cultural issues in American politics, same-sex marriage and abortion.

First, at a Republican governors meeting on July 22, he referred to the recent decision by the New York legislature to legalize gay marriage as something that was "fine with me," and said further: "That is their call. If you believe in the 10th Amendment, stay out of their business." But then, in a matter of days, he was performing what can only be described as a public act of penance on Christian right potentate Tony Perkins’ radio show, trumpeting his support for a constitutional amendment to ban same-sex marriage nationally.

Despite holding personal pro-life beliefs, Texas Gov. Rick Perry categorized abortion as a states’ rights issue today, saying that if Roe v. Wade was overturned, it should be up to the states to decide the legality of the procedure.

By August 1, though, after public criticism of Perry from anti-abortion leaders, he backtracked again and made clear his support for a federal constitutional amendment banning abortion as well.

Aside from making Perry look like a flip-flopping pol who is afraid of conservative activist groups, these incidents probably confused some folks about what the authorized "true conservative" position on these issues actually is. Do they favor states’ rights or federal domination of state policy-makers on cultural issues? And if it’s the latter, how come so much recent conservative activism on abortion and same-sex marriage has played out on the state level?

The history of cultural conservatives on these issues is very clear: They favor the maximum legal heft the political market can bear in support of their views. From their point of view, a federal constitutional ban is ideal; federal statutes would be less effective but better than state action; and state action (via either state constitutional amendments or statutes) is a useful fallback position if national bans aren’t practical. Though conservatives often vary in their sense of whether federal or state efforts are most effective at any given moment, it is hard to find conservative activists who actually think the 10th Amendent’s reservation of non-enumerated powers to the states should be dispositive on these issues, which they consider a matter of fundamental, global, eternal issues of right or wrong.

Same-sex marriage is a relatively recent issue that first exploded into the national political arena in 1993 when Hawaii courts appeared to be moving towards a ruling banning discrimination against same-sex couples in the issuance of marriage licenses. The ensuing agitation led to the enactment of the federal Defense of Marriage Act by Congress in 1996, which supposedly protected states (and the federal government) from any obligation to recognize same-sex marriages performed legally in other states, and then to a vast array of politically-driven state-level statutes, ballot initiatives and constitutional amendments banning such marriages or even civil unions and domestic partnership arrangements.

While some conservatives appeared to be happy with the idea of same-sex marriage being confined to a few liberal states, the steadily proliferation of states allowing gay marriage, along with court decisions undermining DOMA (followed by the Obama administration’s announcement that it wouldn’t pursue DOMA enforcement), has helped "traditional family" groups crack the whip among Republicans on behalf of a federal amendment. The 1996 and 2000 Republican Party platforms did not mention a federal amendment but instead simply endorsed DOMA and its enforcement. But the 2004 and 2008 platforms did endorse a federal amendment. With public opinion rapidly trending in favor of marriage equality, it has become far more common to hear Republican politicians argue against a big effort to enact a federal marriage amendment on practical grounds. In the current presidential cycle, Republican candidates Mitt Romney, Tim Pawlenty, Michele Bachmann, Rick Santorum and Newt Gingrich all favor a federal marriage amendment; only Ron Paul and Herman Cain have said they are opposed.

On the abortion front, the obvious difference is that federal constitutional law currently protects (to a greater or lesser degree) abortion rights, circumscribing the opportunities for anti-abortion activism. The fundamental position of the right-to-life movement, which has been enshrined in every national Republican platform since 1984 (the 1976 and 1980 platforms endorsed a constitutional amendment, but with ambiguous language about its scope) is in favor of a Human Life Amendment that would not only overrule Roe v. Wade and Planned Parenthood v. Casey, but would establish fetal rights from the earliest moments of pregnancy (perhaps even prior to implantation of a fertilized ovum in the uterine wall, threatening many popular contraceptive methods) as a matter of federal constitutional law. There is sometimes confusion on this point, since the only constitutional amendment calling itself a “Human Life Amendment” that obtained a congressional vote, a 1983 measure that failed in the Senate, merely denied a constitutional right to abortion, which would have effectively reversed Roe and turned the issue back to the states. But the term now clearly refers to the more sweeping variety of amendment banning abortion nationally.

While the ultimate position of the anti-abortion movement and the GOP as a party (with fewer and fewer dissenters each year) couldn’t be much clearer, there has been an explosion of state-level anti-abortion activity during the last few years, much of it stimulated by the first real crack in the wall of Supreme Court protection of abortion rights, the 2007 Gonzalez v. Carhart decision that validated a federal ban on so-called "partial-birth abortion." By expressing a tolerant attitude toward restrictions that don’t directly ban abortions, and by stipulating that lawmakers (presumably at either the state or federal level) could make factual determinations about the actual necessity of certain post-viability abortions to protect the health of women or the interests of the fetus, the decision seemed to open the door to a variety of restrictions, some aimed at procedures, some at abortion providers, and some at women seeking abortions.

Very recently, conservatives in a number of states have pursued "personhood" bills, ballot initiatives and constitutional amendment proposals that would test the limits of the federal courts’ deference to legislative policy-makers on abortion, and/or set the table for total abortion bans in the case of a hypothetical future reversal of Roe. (Most conspicuously, a 2010 ballot initiative in Colorado pursuing a "personhood amendment" was routed at the polls, but another will appear on the ballot in Mississippi this November).

With much greater success, anti-abortion activists have been promoting "fetal pain" bills that seek to ban abortions after 20 weeks of pregnancy (a standard that flatly contradicts Roe’s prohibition on bans prior to the third trimester of pregnancy) on the highly questionable grounds that this is the point at which the fetus can experience pain. Such bills have been enacted in Nebraska, Idaho, Kansas, Oklahoma, Indiana and Alabama. Legal challenges to these laws will eventually emerge, though some pro-choice advocates fear a rollback of federal constitutional abortion rights and note that only 1.5 percent of abortions occur after 20 weeks.

Lest anyone think the fetal pain bills reflect a retreat from the right-to-life movement’s commitment to a national "solution" to abortion, it’s noteworthy that the pro-life group the Susan B. Anthony List recently pressed on presidential candidates a pledge that included support for a federal fetal pain statute. Candidates Bachmann, Pawlenty, Santorum, Gingrich and Paul signed on to it while Romney, Huntsman and Cain declined. (Romney, for his part, did not mention the fetal pain issue in his objections to the pledge.)

Since he is not a candidate just yet, Rick Perry hasn’t had to make up his mind about a federal fetal pain law. But given his recent experience, he is likely to deal with future demands from the Christian right and other cultural conservatives by simply saying: "Where do I sign?"