What Republicans get wrong about capitalism 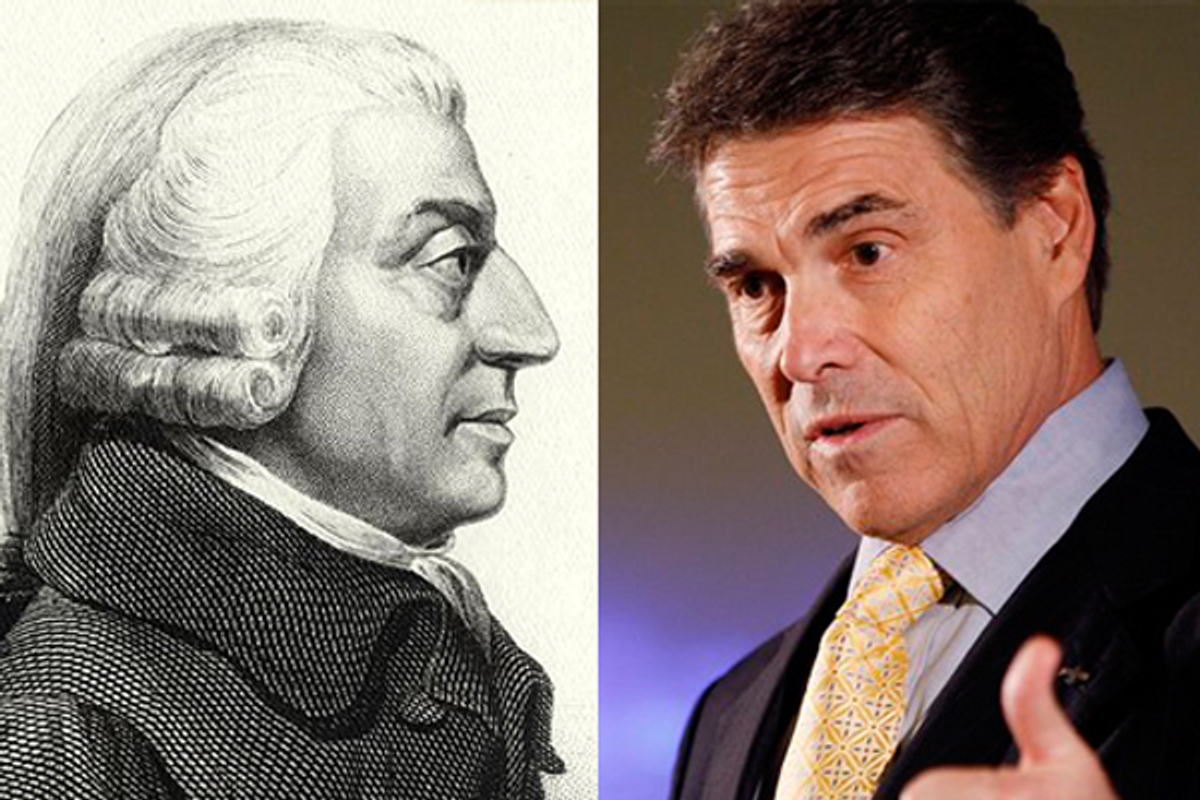 To hear the Republicans tell it, even more than paying down the national debt, the key to solving our current economic woes is to make way for the "job creators," a motley crew of Americans who appear to share no more in common than their membership in the top tax bracket.

The reasoning is relatively straightforward and was summed up recently by Texas Governor Rick Perry: "America is not going to move forward until we remove restrictions of over-taxation, over-regulation and over-litigation on the job creators and free them so the jobs can be created." This is a familiar refrain, one that makes progressives shake their heads at a seeming indifference to hard choices and economic history. Still, by now it should be clear that the refrain is far more than convenient rhetoric. It is founded on a bedrock belief about the free market, one that answers What makes capitalism work? by addressing a different question: Who? For that is what is at stake in the term "job creators," a vision of capitalism's essential players, one very different from the original account provided by Adam Smith. His account of who makes capitalism work is at odds with the one we are used to. The essential players are found at the base, not the apex, of the economic pyramid.

Near the beginning of "The Wealth of Nations", Smith calls our attention to what, for him, is one of the fundamental qualities of human experience: helplessness. "[M]an has almost constant need for the help of his brethren," he says, for unlike animals, we cannot tend to even our most basic needs on our own. How exactly do we gain the help of others? The answer, says Smith, lies somewhere between the fawning cocker spaniel and the commands of an all-powerful king.

Let's hold the king aside for a moment. When a cocker spaniel wants to be fed, Smith says, "it has no other means of persuasion but to gain the favor of those whose service it requires." It wags its tails, licks its master's hand, and appeals to him with puppy dog eyes. The cocker spaniel will occasionally succeed, and so too will the fawning beggar, but such an approach is obviously not an optimal way to get what you want. Indeed, most times people will simply pass by you, leaving you hat in hand.

Thankfully, says Smith, human beings have a natural propensity to negotiate or, as he describes it, to truck, barter, and exchange. "Give me that which I want, and you shall have this which you want" is not only the manner in which we acquire most things in this world, but it is the building block for an economically advanced society. Thus, Smith declares in his most famous passage:

It is not from the benevolence of the butcher, the brewer, or the baker that we expect our dinner, but from their regard to their own interest. We address ourselves, not to their humanity but to their self-love, and never talk to them of our own necessities but of their advantages.

People who read this passage and nothing else of Smith tend to regard it as an affirmation of the virtue and efficacy of selfishness over and against the relative impotence of altruism. But that isn't its significance for Smith. Yes, our personal interests act as a sharper spur to action than the interests of others, but the same may be said for the cocker spaniel. The difference is not that we have selfish interests, but that only by understanding the interests of others are we able to fulfill our own.

Indeed, the passage attests to the human capacity for empathy, the focus of Smith's other great work, "The Theory of Moral Sentiments". It is because of our natural tendency to stand in the shoes of others and see the world through their eyes that we can appeal to their interests. The commercial effect of this practice is that we individually learn how to make the kinds of exchanges that, in the aggregate, lead to the wealth of a nation.

This brings us back to the all-powerful king. Fundamentally, he is no different from the rest of us. Regardless of the scepter and pomp, set him down on a deserted island and he would be just as helpless. Still, when he is seated on the throne he can remedy his helplessness by ordering others to attend to his needs. He can also force them to attend to the needs of one another. In this respect, he provides an alternative way of thinking about how we might distribute the resources of society apart from relying on the dull instinct of altruism or the even the organizational force of self-interest guided by empathy.

And yet, says Smith, if we consider those cases where, because of assumed wisdom and/or threatened force, a single person directs considerable resources, we will soon see that this third way fails to match the decentralized power of truck, barter, and exchange. Reflecting on the creature comforts that even the meanest person enjoys in a developed society, Smith says, if we

consider what a variety of labour is employed about each of them, we shall be sensible that without the assistance and co-operation of many thousands, the very meanest person in a civilized country could not be provided, even according to, what we very falsely imagine, the easy and simple manner in which he is commonly accommodated. Compared, indeed, with the more extravagant luxury of the great, his accommodation must no doubt appear extremely simple and easy; and yet it may be true, perhaps, that the accommodation of an European prince does not always so much exceed that of an industrious and frugal peasant, as the accommodation of the latter exceeds that of many an African king, the absolute master of the lives and liberties of ten thousand naked savages.

If the contrast Smith makes is not necessarily marked by cultural sensitivity, it underscores his broader point about who makes capitalism work. Not the all-powerful king, however wise and mighty, but "the assistance and co-operation of many thousands." The butcher, the baker, and the brewer, the countless men and women who support and extend the division the labor -- these are the people who ensure the increasing efficiency, growing complexity, and continued development of society. They are the base of the economic pyramid, and their actions ensure the bounty of the Invisible Hand.

So what happened to Smith's account? Consider Andrew Carnegie's perspective on who makes capitalism work in his essay "The Gospel of Wealth." Writing a century after Smith's death, the steel magnate describes the decisive moment when human beings began to favor a model of free competition that saw the separation of "the drones from the bees," a process that allowed for the "accumulation of wealth by those who have the ability and energy that produce it." Carnegie says of such people (who happen to look a lot like him) that they are so essential to society's development that those who object to the inequalities of a free market system might as well "urge the destruction of the highest existing type of man."In the same spirit, roughly 75 years later, Ayn Rand, in her aptly titled "What Is Capitalism?," focuses on the "the innovators" who promote a society's development. They are an "exceptional minority," she says, "who lift the whole of a free society to the level of their own achievements." What does everyone else contribute? On Rand's account -- nothing. "The man at the top of the intellectual pyramid contributes the most to all those below him," she says, "but gets nothing except his material payment, receiving no intellectual bonus from others to add to the value of his time. The man at the bottom who, left to himself, would starve in his hopeless ineptitude, contribute nothing to those above him, but receives the bonus of all their brains."

This is a striking alternative to Smith's vision. Instead of "the assistance and co-operation of many thousands," it is an elite caste that provides the vision, brains, and organizational savvy that ensure a thriving economy. They are the Visible Hand of capitalism, and for Carnegie, Rand, and others like them, if you want to know who makes capitalism work, simply stand at the base of the economic pyramid and look up. You'll find the "job creators" at the very top.

Smith would be highly skeptical of such claims. In the final edition of the "Theory of Moral Sentiments," written over a decade after "The Wealth of Nations," he added a chapter in which he describes the "disposition to admire, and almost to worship, the rich and the powerful, and to despise, or, at least, to neglect persons of poor and mean condition." This disposition, Smith says, colors the way we view the world, leading us to conflate wealth and greatness with virtue and poverty and weakness with vice.

It also leads to confusion in thought. Who makes capitalism work? is a very different question from For whom has capitalism worked best? We should guard against presuming the answers are necessarily one and the same.