Do libraries really need to be guarded by private security officers with guns? One county says yes! 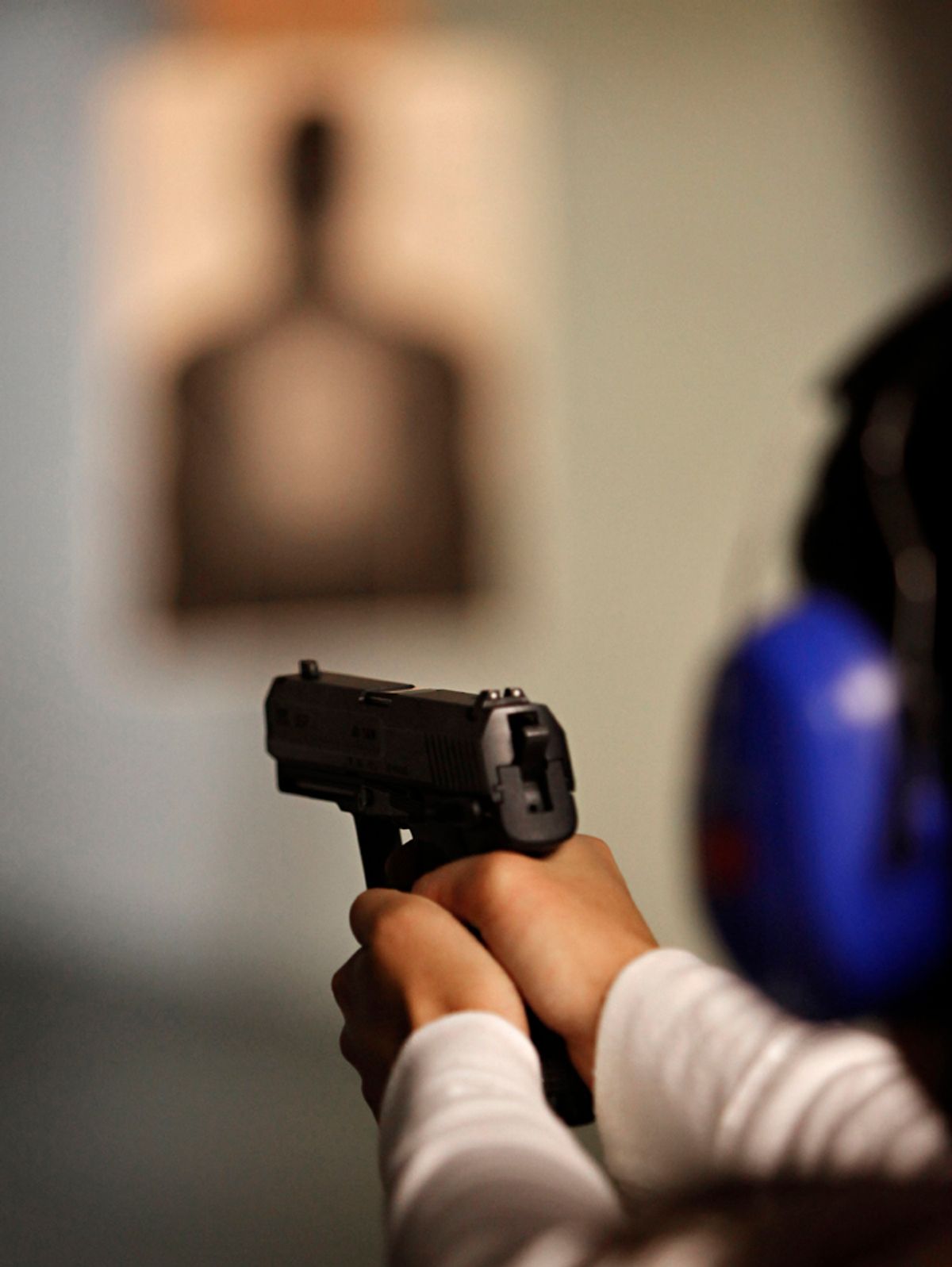 Mari Morneau, of Gilbert, shoots at Caswells Shooting Range Tuesday, April 6, 2010 in Mesa, Ariz. On Monday, April 5, 2010, Gov. Jan Brewer has signed into law two bills supported by gun-rights activists. One of the bills signed Monday would broaden the state's current restrictions on local governments' ability to regulate or tax guns and ammunition. The other bill declares that guns manufactured entirely in Arizona are exempt from federal oversight and are not subject to federal laws restricting the sale of firearms or requiring them to be registered. (AP Photo/Matt York) (Matt York)
--

Do libraries in Maricopa County, Ariz., need to be guarded by private security officers with guns? Yes, probably, because everyone should be armed at all times, especially when they are defending our library books or collecting late fees. Only then will we be free, and safe.

Apparently Maricopa County has guards -- private security firm employees, not county employees, with guns -- proper guns -- at most of its libraries.

"In large buildings with multiple rooms and lots of people, you need to have some feeling among the staff, as well as the public, that it's a secure place, particularly where it's used a lot by children," said library-district director Harry Courtright, who retired Friday.
[...]
In his 12 years with the district, Courtright said there have been no incidents of a guard drawing a gun.

"And they shouldn't have to, because they have the training. But that gun makes a difference to the people who are coming in the building who might want to do something that could be bad; they see an armed guard, and the reality is they back off and they don't do things - it's a preventative thing," he said.

Right! Which is why all large libraries in big cities have armed private guards in them. Right, Phoenix libraries?

Interviews with officials at city-run libraries in the Valley that don't belong to the county district indicate that armed guards are uncommon.

In Mesa, library-security guards are unarmed. The topic of arming them has never come up, said city spokeswoman Lily King-Cisneros.

"If there is a problem, they call the police," she said.

Chandler employs security guards sparingly: Park rangers help during high-traffic times at the Downtown Library, while at Hamilton and Basha branches, both located on school campuses, security guards are present for a few hours following schools' closing times. None is armed.

"Most of our behavior issues take place downtown, and police are less than a block away. We call them quite often and quite frequently," Brown said, adding that stolen bikes are a common problem but threats to librarians are rare.

Phoenix, which has 16 libraries, trains its own guards, who are city employees and unarmed.

Incidents are rare even at the Burton Barr Central Library, where the surrounding neighborhood has a high number of homeless people, said Lupita Barron-Rios, acting deputy director for public services.

"For the most part, we don't have a lot of incidents that require calling the police," Barron-Rios said.

Barron-Rios said police are called when a patron's car or bicycle is stolen.

Of course, none of these minor behavioral issues and occasional thefts would happen at all if literally every person in that library, from the children to the librarians to the homeless people, was carrying a clearly displayed handgun. It's just a fact.

Is this armed guard program controversial? It wasn't, until one library made a fuss.

Doesn't Southwest Regional Library in Gilbert, Ariz., look like a lovely place? Looks can be deceiving! This library is suffering from a rash of "hostile encounters with irate patrons over late fees and other issues," which is why the town decided to reinstate the guards they let go for funding reasons last year. But! "Town officials contend that the library district never told them of the plans to arm the guards once funding was restored ..." I feel like town officials should've understood that they're dealing with Maricopa County, here. There were going to be guns involved, no matter what.