Wherein Walt, Skyler and company begin to figure out that it's never the crime that gets you, it's the coverup 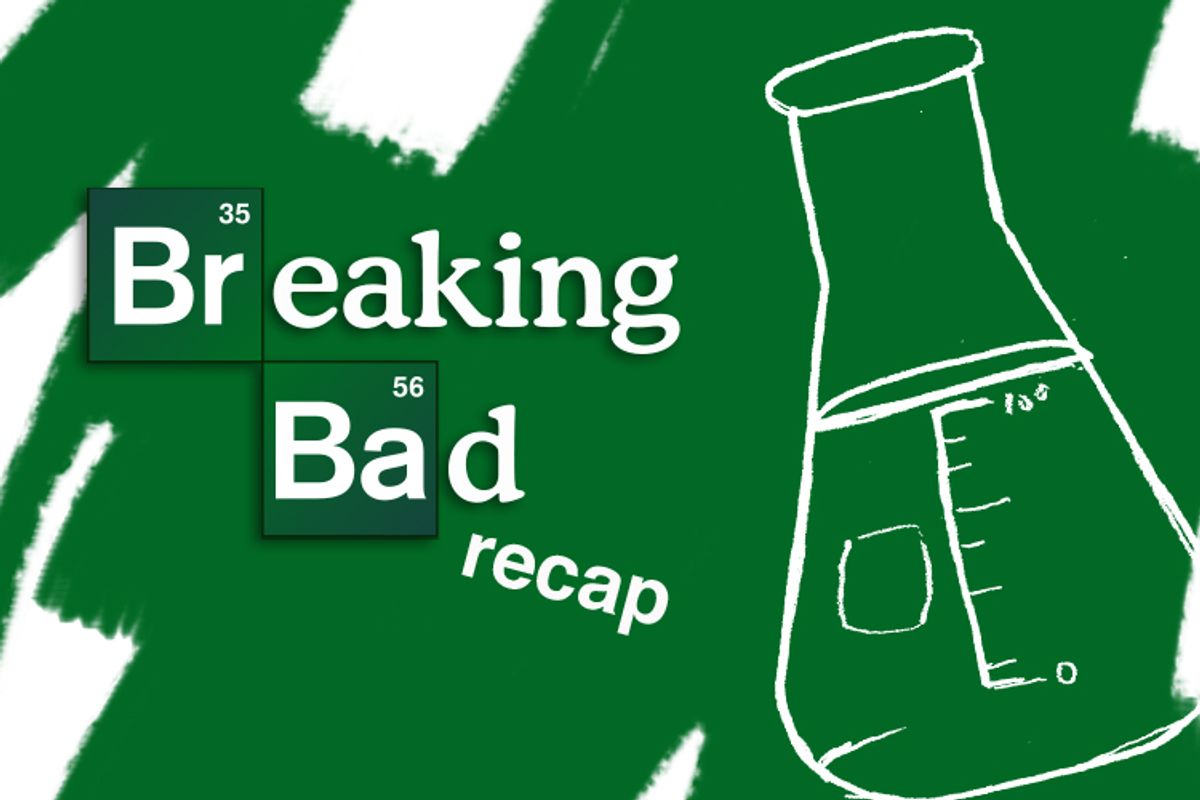 [EDITOR'S NOTE: As always, the following recap contains spoilers for last night's episode. Proceed at your own risk.]

Vince Gilligan, the creator of "Breaking Bad," once said that he and the show's writing staff deliberately wrote themselves into corners during Season 3 for the challenge of writing their way out. I hope the exercise has been fun, because the show is still backed into a corner from the end of last season, when Gus decided that Walt was more trouble than he was worth and could be replaced by his erstwhile protégé, Gale. Walt responded by pressuring Jesse to kill Gale. (Walt volunteered to do the deed himself but had to press Gale into service when he got held hostage in the lab.)

The murder of Gale was strictly a desperation move; by Walt's admission, it didn't truly solve any problems, it just bought him and Jesse a bit of time. But the cost of that time has been steep, not just for Walt but for the show itself. We're almost halfway into Season 4 of "Breaking Bad," and the show is still dealing with the fallout from the last episodes of Season 3. The title of last night's episode was "Bullet Points," named for the comically thorough list that Skyler printed out to help her and Walt convince Hank and Marie that Walt earned his fortune by counting cards rather than cooking meth. But the title doubled as an inadvertent confession of what "Breaking Bad" has become in Season 4: an exercise in accounting, in dramatic housekeeping, one that is constantly asking: Where are we? How did we get here? How do we move forward? Are there any loose ends that still need to be tied up?

That's an expected part of any heavily plot-driven series, but there's always a risk that the accounting or housekeeping aspects will overwhelm a show's more spontaneous pleasures -- and that's what seems to be happening on "Breaking Bad." The show is still terrific, still a pleasure to watch and write about, but these past four episodes have been so much about details and aftermath that it's hard to imagine it moving forward without some possibly ludicrous deus ex machina occurring. And the constant dwelling on the plausibility of Walt's card-counting and car wash investment scheme naturally encourages the viewer to question the plausibility of everything that has happened up to now, which can't be good for the show.

I've gotten a few Salon comments and emails from readers complaining that the series is now somehow more implausible than in seasons past. The complaints are mainly directed at Skyler's active participation in Walt's criminal life, especially that "Cyrano de Bergerac"-style bit where she whispered the legal facts of groundwater contamination statutes to a phony government inspector via a hidden earpiece while he was meeting with the car wash owner. Those gripes strike me as ludicrous and faintly sexist. So it's ridiculous that Skyler would demonstrate nerves of steel and an incredible capacity for fibbing, but it's not implausible that a formerly milquetoast chemistry teacher would reveal himself as a secret badass, capable of confronting and outthinking some of the most dangerous criminals in New Mexico? But there's a core of legitimacy to them, one that has less to do with Skyler's role in the drama than the mechanics of TV storytelling itself. The longer a show stays on the air, the longer viewers have time to dwell on the particulars of its plot and start poking holes in the entire exercise.

Hell, even I'm doing it, and I tend to find the mechanics of plot and plausibility the least interesting aspect of discussing films and TV shows. Although I wouldn't deign to suggest an alternative to the card-counting cover story, I must admit it strikes me as half-assed. As was established in a hospital room scene with Hank last season, Walt doesn't play cards and has never shown any interest in doing so. If his cover story ever got questioned, all a cop or government lawyer would have to do to totally destroy it would be be to shuffle and cut a deck, sit down at a table across from Walt and say, "How about we pass the time by playing a little blackjack?" Nobody who contemplates the game with such agonizing slowness, monologuing like a supervillain in "The Incredibles," could possibly be a good card-counter. Nor did I buy Walt and Skyler's hasty conclusion during the "bullet points" scene -- which felt very much like a somewhat awkward meta-commentary on the writing and acting process -- that if anybody questioned the cover story, Walt could just say that he doesn't like to play cards anymore, or even talk or think about that period in his life, because it's just too shameful. In essence they've decided to flesh out their cover story by sticking their fingers in their ears and going, "La la la la la la, I can't hear you!" (At least the series admits that the cover story creates as many complications as it solves; when Skyler and Walt reveal it during dinner with Hank and Marie, Walt Jr. exclaims, "I can totally get a car for my birthday now!")

If you dwell on the card-counting story, you naturally start questioning other aspects of the series, such as the unlikelihood of Hank, a supposedly smart DEA agent, somehow failing to put two-and-two together and realize that Heisenberg is Walt. The scene in last night's episode where Walt sneaks into Hank's room to get a look at Gale's lab book felt like something from a sitcom, and the follow-up scene with Walt and Hank perusing the lab book in Hank's bedroom was even more agonizing, and not in a good way. Hank even suggests "Walter White" as a possible answer to the mysterious "W.W." acronym in Gale's dedication; man, isn't it lucky for Walt that Gale put a Walt Whitman quote in there, so that Walt could stumble upon it and say: Hey, look, a Walt Whitman quote! Guess that must be the answer! So Hank is obsessed with nailing Jesse, and he knows that Jesse was a talented but flaky former student of Walt's, and that Walt was a brilliant research chemist before he became a schoolteacher, but it never occurs to Hank that the two characters might have more than a casual link?

I'm starting to think that Gilligan and company had Hank get shot last season partly to buy themselves more time as writers and keep the show going -- and to take Hank out of the narrative equation for a while, the better to prevent viewers from asking, "If this guy is such a great cop, how come he can't see what's right in front of his face?" It's the problem faced by the writers of the original "The Untouchables" series, and the 1980s Michael Mann series "Crime Story" -- no matter how talented a cop or detective is supposed to be, if you have him chasing the same criminal for several seasons without ever catching him, he starts to seem incompetent.

Bear in mind that I'm nowhere near giving up on "Breaking Bad." It's one of my favorite current series, and I love how it keeps finding new ways to challenge itself and us, whether through playful formal experiments (the teaser openings often feel like little self-contained short films) or through surprising yet spot-on character details. (I love the continuing revelations of Gale's character, such as the Ron Paul sticker in the lab notebook and the clip of Gale doing a karaoke version of Peter Schilling's "Major Tom" with Japanese subtitles at the bottom of the screen.) I love what has happened to Jesse -- how nihilistic and bitter and hard he's become, with a "Who gives a damn" attitude about everything from a petty criminal's theft of his too casually stored duffel bag of money to the possibility that Mike is taking him out into the desert to execute him. (Mike: "Gonna ask where we're going?" Jesse: "Nope.") And I love the fog of guilt and complicity that seems to hang over almost every character and relationship. By this point in the narrative, most of the major characters are involved in some sort of deep deception or self-deception, and discovering that it's never the crime that trips you, it's the coverup.