An unlikely role model for Obama

James Madison was a weak and easily intimidated president, until he learned to stand up to Congress 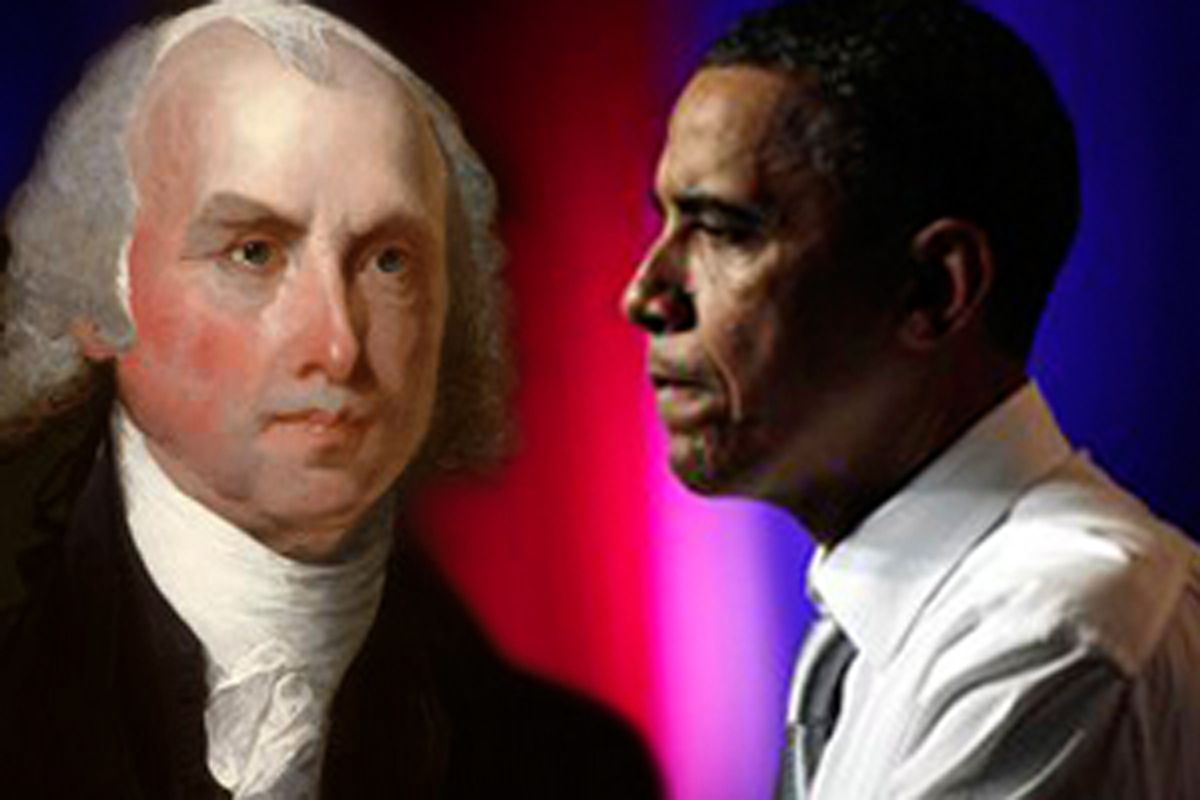 We present a parable of sorts, about a president who learned to overcome his reluctance to confront Congress and went on to earn a prominent place in history.

As our 44th president, a one-time constitutional law professor, knows well, the framers intended for Congress to be the most active branch of government -- they were far more afraid of executive tyranny than filibuster. This explains why James Madison, the fourth president, and the authority on the sacred secular text hammered out by compromise in Philadelphia, proved himself a most dynamic force as a representative from Virginia in the First, Second, and Third Congresses of the United States. But once he was elected president in 1808, he became a mild, even weak national executive.

Like 44, 4 was rationally and not emotionally driven. Two hundred years ago today, he was finding it near impossible to extricate himself from a looming war of questionable value to America’s national interests; and in his first term, the House of Representatives did more to direct the course of human events than he did.

Perhaps that is what we are seeing in President Obama’s strict adherence to a Madisonian perspective, unable to enact his preferred policies while Congress stews. Obama acquiesces, and then gets blamed for the mess he’s been put in. This is why his avid supporters are losing faith. Madison failed to live up to his promise, too. Detractors joked that he was "Whiffling Jemmy" as election 2012 (whoops, that’s 1812) approached; and he faced opposition from within his own party -- from New York powerhouse DeWitt Clinton, a former close ally of Madison’s. In the general election, the incumbent narrowly defeated Clinton, who in effect ran as a third-party candidate.

Now, we’re not suggesting that President Obama has anything to fear from a New York powerhouse named Clinton. But, to move ahead with the parable, here’s what happened to the good and true James Madison: Elected to a second term, he saw the error of his ways and finally took charge, displaying his disgust with a Congress that would not act in the best interests of the country.

Madison, under the care of three physicians for a life-threatening fever, had watched as his Cabinet became a breeding ground of discontent. One day in 1813, after he had resolved to refortify his inner circle and had dispatched his most trusted, Treasury Secretary Albert Gallatin, to negotiate in Europe an end to the futile War of 1812, a committee from Congress came to him. As a group, they challenged his authority to appoint a Cabinet member to a diplomatic job. Madison let them know, in no uncertain terms, that Congress could not dictate to the president. He rejected the resolution in their presence. They bristled. Win or lose, he stood his ground, convinced of his superior understanding of the Constitution.

As far as the Constitution is concerned, Madison, though he is generally thought of as the original originalist, several times changed his interpretations about questions of the balance of powers in government. If he could, so can President Obama. Madison would be stunned, stupefied, and nauseated to learn that huge corporations get excessive tax breaks and have the federal government in a stranglehold. His were simpler times. Big business was supposed to work with the state, not drain it by purchasing congressmen.

The political paralysis we are living in the midst of is not the fault of President Obama, unless you believe that reasonableness is un-American. The filibuster rule in Congress bears some responsibility. Positive policy is repeatedly thwarted by a vocal, do-nothing minority. When we think of something like the ground zero mosque panic that beset the nation last year, only to disappear before some other spectacle, which then yielded to the rising panic of the debt ceiling crisis, it seems these days that as panics come and go, "crazy" succeeds in moving the polls. So it is no single thing, but a debilitating combination of stubbornness in ideology, the panic-spectacle-makes-news impulse, a herd mentality, powerful lobbies, and procedural changes in Congress that make panic-stricken dysfunction the rule of Washington. That and, of course, the Republicans' stated purpose of doing everything possible, no matter whom they hurt in the process, to make Obama look foolish.

There is one more piece to add to the parable. After the Constitutional Convention, Madison was unhappy because he did not get what he really wanted in the compromise that his colleagues hammered out. He wanted a powerful, censorious Senate composed of the best and brightest whose "absolute negative" (veto power) over unsound state legislation would make it impossible for ignorant, unenlightened state and local officials to hold back progress. Yes, Madison would have been happier with a federal Constitution that overrode the locals and allowed the federal government to underwrite improvements in expanding the nation -- good roads, safe bridges (and, if we are to translate the concept into modern categories), high speed rail, clean energy.

The petite, sickly 4th president looked more like Michael Dukakis in a tank than George W. Bush on an aircraft carrier or Barack Obama at the podium. Which is precisely why the telegenic 44th president, capable of tremendous eloquence onstage, should be in a position of strength if he wins reelection (a big if right now) to recapture the public’s enthusiasm and enact real change instead of dithering with the short-sighted.

If the mild-mannered "Great Little Madison" could stand up to Congress, certainly Obama should be able to. He’ll do what it takes to get reelected, of course, and then, let’s hope, be more proactive and less congenial to the Tea Party purists and the filibuster-tainted, fear-mongering, epithet-mangling corporate mascots, elected on the basis of superficial attributes, whose motives Americans have learned to treat as suspect.

And if he doesn't win reelection next year, another presidential parable might apply: the story of Grover Cleveland, the only president to serve two non-consecutive terms.  When he sought reelection at the end of his first term in 1888, Cleveland won the national popular vote, but still lost to Republican Benjamin Harrison in the Electoral College. Cleveland was candid. He took strong positions and stuck to them. He also got saddled with a massive economic meltdown in his second term, which resulted in three consecutive Republican presidents in his wake.

But Obama hasn't lost yet, so for now, his best bet is to take a cue from President Madison, who learned not to be too nice when the opposition was dominated by folks who only directed their decision-making toward tactical, short-term gains. In Madison’s second term, the British burned Washington, which should have killed his reputation. And yet, by maintaining his integrity, 4 has fared well in history. 44 could do worse. Let’s hope he doesn’t.

Andrew Burstein and Nancy Isenberg are professors of history at Louisiana State University and coauthors of "Madison and Jefferson" (Random House, 2010).