Big Brother is tracking you: GPS and the 4th Amendment 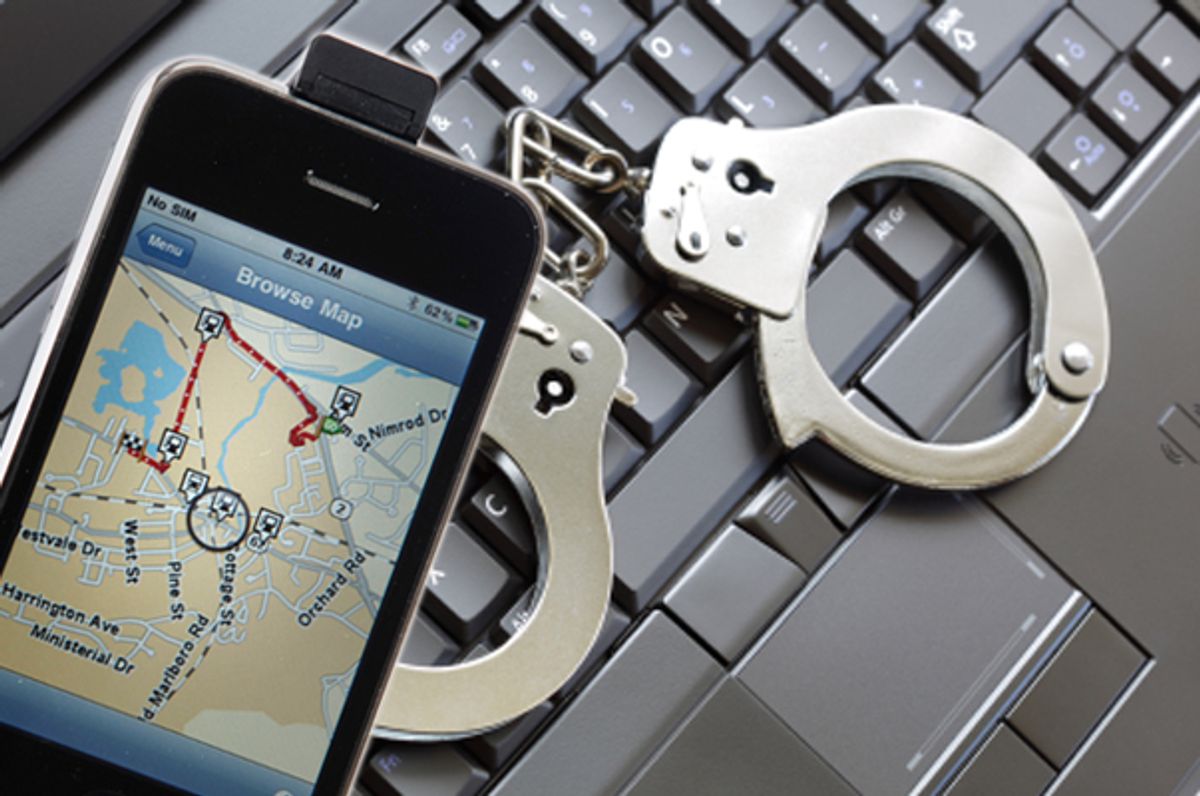 When is a search not a search?

Or, more pointedly: When are electronic or other forms of surveillance of an individual considered a search under the Fourth Amendment -- thus requiring a valid warrant to conduct such surveillance in a manner that protects the individual from "unlawful search and seizure"?

How the U.S. Supreme Court answers that question, in a case on its docket for the term starting in October, will have far-reaching implications for the power of government and for the privacy of individuals, according to lawyers and privacy rights advocates.

If the Court holds that warrants are not required for this type of surveillance, it could mean "the technological death of the Fourth Amendment,” warns Arkansas-based attorney John Wesley Hall, a leading Fourth Amendment expert who also writes a blog and runs a website.

The case before the Court concerns a 2004 investigation by a task force of FBI agents and officers of the Washington, D.C., Metropolitan Police Department of a suspected drug trafficker named Antoine Jones.

In addition to traditional surveillance methods, such as placing a fixed camera on a corner near a now-defunct club that Jones owned, and a wire intercept on Jones' cell phone, the investigators employed some of the sophisticated technology now available to law enforcement, such as a pen register (an electronic device that records all phone numbers called from a particular line), and GPS tracking.

How they used the GPS tracking device, which they installed on a Jeep Cherokee registered to Jones' wife, is at the heart of the case.

The officers obtained a judicial warrant providing for a 10-day tracking period inside the District of Columbia. However, they actually installed the device after the 10-day window had expired -- the reasons have not been brought out in court -- and they did so while the Jeep was parked in a public lot in Maryland.

The GPS data provided a 24/7 record of all of Jones' movements in the Jeep over the next month -- including, at times, the movements of his wife and family -- and helped the government tie Jones to a suspected stash house in Maryland.

In October 2005, agents executed search warrants for several locations, including the Jeep and the Maryland stash house. They recovered large amounts of cash, and large quantities of both powder and crack cocaine. Jones was eventually convicted on a charge of conspiring to sell drugs and was sentenced to life in prison.

Jones appealed his conviction, arguing that the prolonged GPS surveillance by the government, without a valid warrant, constituted an illegal search.

Last year, the D.C. Circuit Court of Appeals ruled in his favor. Jones had a "reasonable expectation" of privacy because all of his movements over a prolonged period were not actually "exposed" to the public, the court said.

The U.S. Supreme Court had previously ruled in 1967, in Katz v. U.S., that what a person "knowingly exposes to the public" is not subject to Fourth Amendment protection.

But such round-the-clock tracking of movements contrasts starkly with that exception, said the three-judge panel.

The D.C. court ruled that the type of satellite-guided surveillance used in the Jones case -- and available only because of advancements in technology over the last decade -- is different from previous cases decided by the courts, including the Supreme Court.

The earlier Court decision declared that individuals had a decreased expectation of privacy in their discrete travels on public roads, and that law enforcement agencies therefore do not need a warrant in order to augment their ability to physically track those discrete movements.

Judge Douglas Ginsburg, a Reagan appointee, in his summation of the D.C. court's unanimous decision, said the panel was persuaded that in fact Jones' movements during the month he was tracked by GPS were "not exposed to the public."

"First, unlike one's movements during a single journey, the whole of one's movements over the course of a month is not actually exposed to the public because the likelihood anyone will observe all those movements is effectively nil," he wrote.

"Second, the whole of one's movements is not exposed constructively even though each individual movement is exposed, because that whole reveals more -- sometimes a great deal more -- than does the sum of its parts."

The ruling did not impress the Department of Justice, which in April petitioned the Supreme Court, asking it to review the Jones case.

Should the D.C. Circuit ruling be allowed to stand, the government argues in a brief written by then-Acting Solicitor General Neal Kumar Katyal, it has the "potential to destabilize Fourth Amendment law and to raise questions about a variety of common law enforcement practices."

The theory advanced by the appeals court that the "aggregation of public information produces a Fourth Amendment search, even when short periods of surveillance would not" might call into question lengthy uses of pen registers, repeated "trash pulls," or even long-term visual surveillance, the government claimed.

According to the government, the use of GPS is a key tool for police in establishing the intelligence needed to secure a warrant under the "probable cause” requirement. Adding this extra step "will seriously (impede) the government's ability to investigate leads and tips on drug trafficking, terrorism, and other crimes," it argued.

In the Jones case, the fact that the GPS tracking device wasn't installed within the period specified by the warrant, or while the car was in the District, was not significant, because it doesn't actually need a warrant for this kind of surveillance, the government maintains.

Part of the government's pitch to have the Supreme Court accept the case for review is its contention that the D.C. Circuit's decision in the Jones case has created a "division of authority” in the federal courts of appeals.

It argued that the ruling conflicted with decisions taken by three other appellate courts in similar cases that allowed "warrantless” GPS tracking, as well as with a previous ruling from the high court. (Traditionally, conflicts of opinion among these 12 courts will prompt the Supremes to accept a case on appeal.)

The DOJ argues that a 1983 Supreme Court case, U.S. v. Knotts, set a clear precedent that tracking is legal without a warrant. In that case, Minnesota law enforcement officers used a "beeper" tracking device to help them physically follow a barrel of chloroform being transported from the Twin Cities to Wisconsin, where it would be used to manufacture illegal drugs.

Then-Justice William Rehnquist wrote for the majority that the "governmental surveillance conducted by means of the beeper in this case amounted principally to the following of an automobile on public streets and highways. We have commented more than once on the diminished expectation of privacy in an automobile ... "

While the government argues that the Jones case is no different from Knotts, veteran attorney Stephen Leckar, who represents Jones, claims the D.C. Circuit opinion hit the bull's-eye.

Leckar argues that the Knotts case left open, on purpose, the question of whether warrantless long-term surveillance by more complicated means might indeed violate the Fourth Amendment.

Contrary to the government's opinion, he says in his opposition brief, none of the appeals courts was asked to address whether "information about patterns of movement and habits that would be infeasible to obtain through visual surveillance, as opposed to merely information about discrete journeys” is a violation of the "reasonable expectation of privacy.”

Leckar draws a clear difference in the circumstances surrounding the two cases. In Knotts, he argues, the court ruled that the warrantless radio-transmitter tracking was permissible because it merely aided officers who were physically surveilling the suspects' movements during a discrete journey on public roadways.

Indeed, officers had to be in close physical proximity to the suspects in order for the limited-range beeper to be of any use.

In contrast, the 24/7 surveillance of Jones provided by GPS did not augment any officer's senses; rather, it completely supplanted them. The satellite tracking technology used for GPS surveillance means the agents on the Jones case did not have to be anywhere near him at any time in order to collect vast amounts of information about his movements.

As Leckar told the Crime Report, a beeper is a "simple sense-augmenting device," while a GPS tracking device, designed by the government for military use and only made available since 2000 for civilian applications, is "not sense augmenting; it's sense supplanting."

And that is one of the main reasons that in order to pass the Fourth Amendment's legal standard a warrant is needed to conduct GPS surveillance, Leckar argues.

The "D.C. Circuit was correct to hold that pattern information is dramatically more intrusive than mere information about an individual's discrete journeys,” his brief argued. "Indeed, the distinction between discrete bits of information and patterns of conduct is well-accepted."

To privacy and Fourth Amendment advocates, the distinction is crucial.

In a brief supporting Jones before the D.C. Circuit, the Electronic Freedom Foundation and the ACLU, and which they are expected to revive before the Supremes, argued that GPS technology now gives police extraordinary new powers to remotely track individuals over long periods in both public and private realms.

"Without a warrant requirement, an individual's every movement could be subject to remote monitoring, and permanent recording, at the sole discretion of any police officer," the brief said.

Gun Owners of America, Inc., Gun Owners Foundation, and several other conservative groups have already filed an amicus brief with the Supreme Court urging it to restore "the Fourth Amendment to its original text and purpose."

He told TCR that if the Amendment's authors had any "inkling that this [GPS tracking] was a possibility they would've said, 'hell no!'"

And how the Court responds in the Jones case will be telling.

In other cases -- including a Fourth Amendment case from 2010 involving text messaging (City of Ontario v. Quon) -- the judges demonstrated during oral argument that they are not exactly tech savvy, says Hall.

That, he adds, could hinder their understanding of how the Jones' GPS tracking differs from the beeper used in Knotts. It may be up to the judges' clerks, he says, to help ensure their bosses are up-to-speed technologically.

According to Hall and other advocates, the Court's ruling will be critical to defining the power of government in an era when advanced technology is increasingly challenging traditional notions of privacy.

"What's the next step?" he asks. "Suppose the government wants to require GPS on every American-made car? What's preventing them from saying that all cars made in America will have GPS installed?"

And the implications for phone-based tracking are equally ominous, he says.

"Every phone made since 2008 comes with GPS," he says. "Can the government mandate surveillance of every person via phone GPS? It scares the hell out of me what the government can do."

Hall says the speed of technological advances reminds him of the dissent written by Supreme Court Justice Louis Brandeis in the 1928 case Olmstead v. U.S.

There, the court ruled that wiretapping did not violate the Fourth Amendment because the phone line had been tapped without any actual physical trespass by the government. That case was later overruled, in 1967; but at the time Brandeis noted that the majority decision was troubling.

"More than 80 years ago, [Brandeis] said that at the time technology was moving faster than the Fourth Amendment," Hall recalls.

Jordan Smith, a former winner of the John Jay/H.F. Guggenheim Prize for Excellence in Criminal Justice Reporting, is an investigative reporter for the Austin Chronicle. She welcomes comments from readers.