Inside Libya's most notorious prison 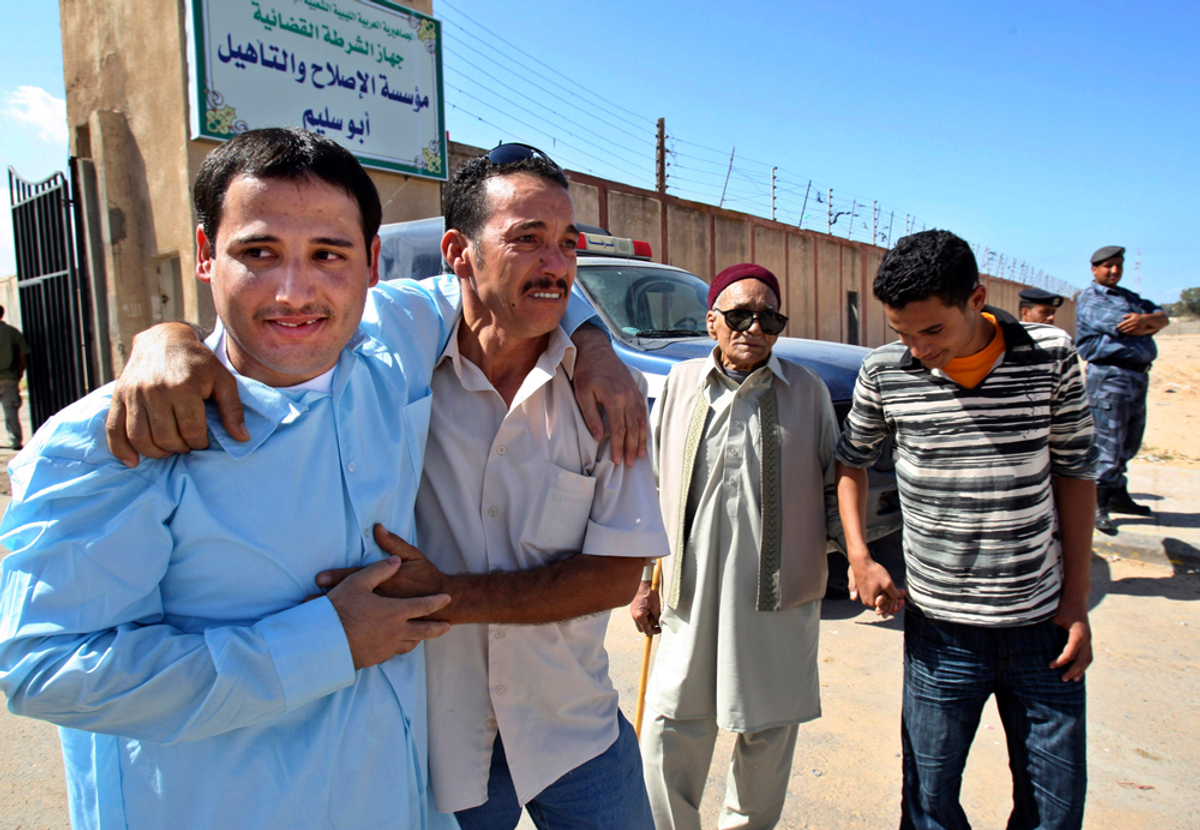 A former Libyan prisoner, left, is greeted by his relatives after being released from Abu Salim in Tripoli, Libya, Thursday, Oct. 15, 2009
--

The words sent chills through Dr. Ahmed's already badly beaten body. He had been helping an Al Jazeera reporting team in March, during the early days of the Libya uprising, when forces loyal to Muammar Gaddafi surrounded the western city of Zawiya, capturing him and his colleagues.

After days of interrogations and torture, he was dropped under the cover of darkness in a large prison outside Tripoli known as Abu Salim. It was there, 15 years ago, that a now infamous massacre of political prisoners took place, an event that would ultimately lead to the open revolt that is now gripping the country.

It was 1996. Prisoners at Abu Salim began to riot over poor prison conditions. In response, the Gaddafi regime said it would send negotiators. Instead, it sent in a firing squad and systematically gunned down 1,200 people.

Hussein Al-Madni, 38, was there at the time.

He had been arrested for his involvement in political Islam -- a movement Gaddafi long perceived as a threat to his rule -- and imprisoned at Abu Salim in 1995, along with his twin brother Hassan, whose only offense was having a similar name.

Hassan was jailed in the wing where the riot took place and was taken out to the square with the others that day.

"After lining them up in a row, the soldiers used AKs and RPGs on them. Everyone was killed in one hour and 45 minutes," Al-Madni said in an interview with GlobalPost from his home in Benghazi. "They killed adolescents, education professionals, community leaders."

Although he knew what happened to his twin brother, many other families were left in the dark. Authorities quietly buried the bodies under the prison and the prison guards acted for years as if the captives were still alive when families came to deliver food and clothes.

In 1989, Libyan internal police came to the pharmacy where Ramadan Osman, 22, had been working. They arrested him on charges of being a Muslim fundamentalist. The family learned of his arrest when a colleague dropped off the keys to the pharmacy that evening, according to his brother, Osman Faraj Osman.

The Osman family tried to visit Ramadan many times at Abu Salim. They brought care packages but never saw him face to face, and never spoke to him on the phone. After word began to leak about the massacre, Osman had a feeling his brother was dead.

The families of those killed hail mostly from the eastern city of Benghazi, what has now become the rebel capital. Frustrated by a lack of information regarding their loved ones, a group of 30 families filed a complaint in a Libyan civil court in 2007.

In 2008, in an unprecedented action, the relatives began to gather each Saturday in front of the Benghazi courthouse to demand answers.

It was these protests that laid the groundwork for the rebel movement that is now, aided by NATO, fighting Gaddafi forces and pushing toward Tripoli, the capital.

The Libyan government, anxious to rehabilitate its international image and end its longstanding diplomatic isolation, attempted to appease the families, issuing death certificates and compensation.

"After 15 years, the system just gave us a paper," Al-Madni said. "To us, this document indicated your son or brother has no value."

"We demanded the bodies and punishment of those responsible," Osman said. "They offered a compensation of 200,000 dinars. We considered it a bribe to be silent."

During the protests they held signs that read, "Subject: Collective execution, Location: Abu Salim, date: 29-6-1996." Some carried framed photos of their missing. A girl carried a homemade poster that said, "My father, what happened to him?"

The collective call for answers began to breathe new life into the shattered families.

"We felt we broke the barrier of fear against the system," Osman said. "I felt I refreshed the remembrance of my brother."

The Libyan government began to photograph them during the protests and secret police followed them home. A handful were arrested and detained for days at a time. In detention, they were asked to sign a document saying they had received compensation.

"They said, just accept this money. But we refused to put our signatures to it," said Mohammed Gouba, whose brother was also killed at Abu Salim.

In February, Fathi Terbil, a lawyer for the first Abu Salim families to come forward, was arrested, sparking one the largest public demonstrations in more than four decades. Hundreds joined protests in Benghazi demanding the lawyer's release.

Terbil was eventually released, but the demonstrations didn't stop. Instead, they grew, and began to demand an end to the Gaddafi regime altogether.

It was the beginning of a full-scale revolution.

"Our group was the first group to demand the rights for those without voices," Al-Madni said. "You can say we were the spark for all this."

According to former prisoners at Abu Salim, things have not changed.

When Dr. Ahmed arrived in March, he was placed in a solitary cell with no windows and given just enough bread and water to stay alive. Guards would summon him at all hours for interrogations, during which he was tortured -- electrical shocks from a charged cattle prod applied to his head and groin, repeated blows to the head and whippings across his back with rubber hoses.

His experiences aren't that different from the events that made Abu Salim internationally known, except he survived.

"There are 1,200 prisoners buried underneath you," the guard told Dr. Ahmed upon his arrival. "So don't even hope for escape."

Dr. Ahmed was tortured so badly at Abu Salim that he cannot hear out of one ear and his teeth are ruined. He said he prayed as much as he could while in solitary confinement.

"That was all there was to do," he said. "Your life was in God's hands. I'd certainly bet Abu Salim is worse than Guantanamo."

On his last night at Abu Salim, they brought him out of his cell and made him kneel outside in the darkness. He heard other prisoners kneeling beside him. They waited. He heard steps behind him and the charging of a rifle. Two AK-47 bullets rang past his ear.

The mock execution was his send off to another prison -- Al Jadida, where treatment in communal cells much improved and he told GlobalPost this account.

In Al Jadida he reunited with other Abu Salim veterans, who cried for joy thinking he had been executed that night.

Dr. Ahmed was eventually freed and has left Libya for his own safety.