The abortion that Mitt doesn't talk about anymore

His young relative died tragically in an illegal abortion in 1963: Her untold story -- and what it means for Romney 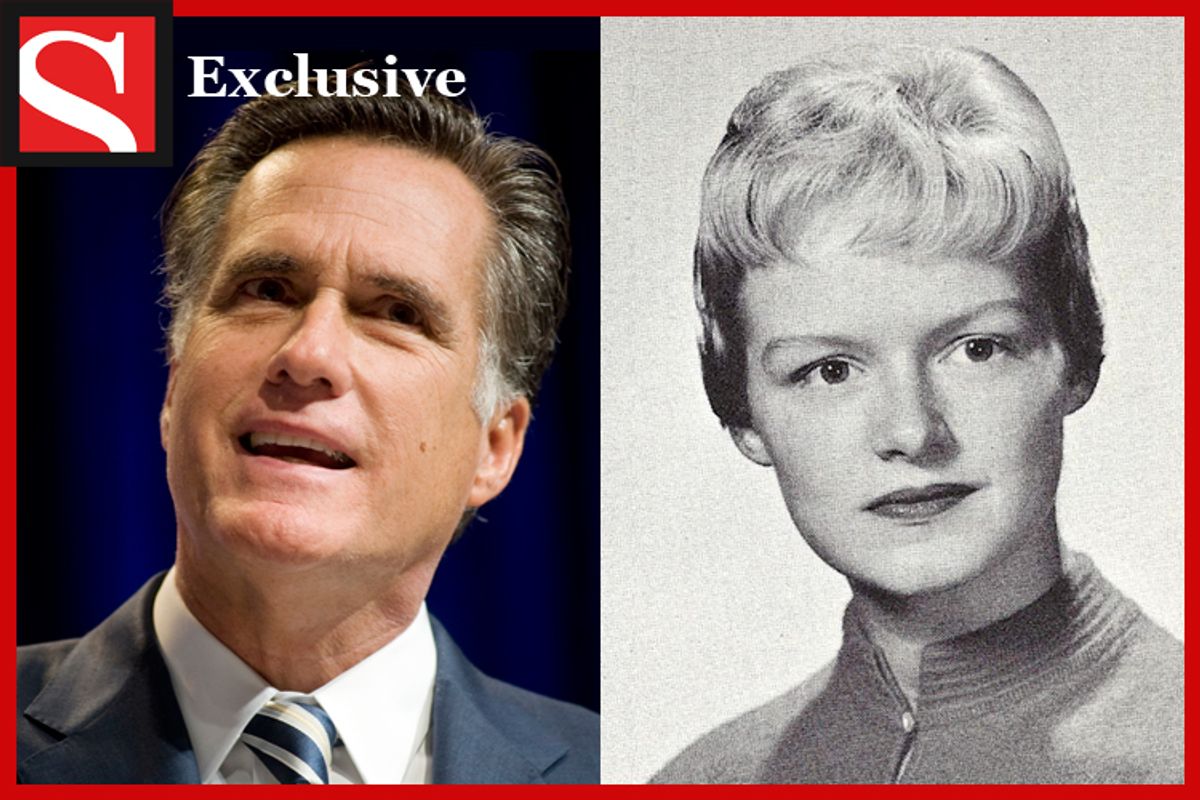 Mitt Romney and his relative Ann Keenan in her high school yearbook picture.
--

In a 1994 Senate debate with Ted Kennedy, Mitt Romney revealed a startling chapter from his past:  A close relative had died many years earlier in a botched illegal abortion, shaping Romney's stance in favor of safe and legal access to abortion for all women. But in the many years since that revelation, even as Romney flipped his position and became an ardent opponent of legal abortion, the details of his young relative's story, including even her name, have never been reported.

The relative he was referring to back in '94, Salon has learned, was a Detroit woman named Ann Keenan. She was the sister of Romney's brother-in-law and died at the age of 21 in 1963, a full decade before Roe v. Wade. While much of what happened remains murky, an investigation by Salon has uncovered never-reported details about her life and death, including: how she died (an infection); that her grief-stricken parents asked for memorial donations to be made to Planned Parenthood; and that the family apparently wanted to keep the death quiet because Romney's politically ambitious father, George, was then governor of Michigan.

With access to abortion increasingly restricted in many states and the possibility that a Republican victory in 2012 -- potentially by Romney -- will tilt the balance of the Supreme Court against Roe v. Wade, Romney's account of how a back-alley abortion touched his own family is more relevant than ever. The episode is a window into an era when obtaining an abortion meant the real risk of serious injury or death. It also represents a key part of Romney's political journey on the issue of abortion, which has more than any other tarred him as a flip-flopper.

The outlines of the story first became public when Romney -- unprompted -- brought it up in that 1994 debate with Kennedy, whom he was trying to unseat. At the time, Romney, who was making his first bid for office, was struggling to prove his pro-choice bona fides to liberal Massachusetts voters. In the debate, he insisted that he separated his personal beliefs -- opposition to abortion -- from his policy position that abortion "should be safe and legal in this country." Accused by Kennedy of being "multiple-choice," Romney angrily fired back:

"On the idea of 'multiple-choice,' I have to respond. I have my own beliefs, and those beliefs are very dear to me. One of them is that I do not impose my beliefs on other people. Many, many years ago, I had a dear, close family relative that was very close to me who passed away from an illegal abortion. It is since that time that my mother and my family have been committed to the belief that we can believe as we want, but we will not force our beliefs on others on that matter. And you will not see me wavering on that." Watch:

After the debate, the Romney campaign wouldn't identify the woman Romney had referred to, saying only that she was the sister of Romney's brother-in-law, and that she had been engaged when she became pregnant. The candidate himself said, "I hadn't thought much about" abortion until the relative's death, but that it "obviously makes one see that regardless of one's beliefs about choice, that you would hope it would be safe and legal." Through public records in Michigan and interviews with people who knew her, the basic contours of Ann Keenan's life can be established. This picture, at right, is from her 1959 senior yearbook at Detroit's exclusive Liggett School (click for larger size), four years before her death.

Keenan was born in 1941, the daughter of a Detroit public school English teacher. Her elder brother Loren married Mitt Romney's elder sister Lynn in the late 1950s. The family lived on Edison Avenue in the well-to-do Boston-Edison neighborhood in the heart of Detroit, then a booming manufacturing center. (Indeed, George Romney was president of the American Motor Corp. before being elected governor of Michigan in 1962.)

"She was so intelligent, beautiful and a friend to everyone," Marilyn Frey, a classmate and friend of Keenan in the 22-member class of 1959 at the all-girls Liggett School, recalled in an email to Salon. In high school, Keenan was active in theater, performing in "The Importance of Being Earnest" and serving for three years on the drama board. She was a scholarship recipient and class president her sophomore year. One of Romney's sisters was quoted in the press in 1994 recalling that Keenan "was a beautiful, talented girl [whom] we all loved."

Keenan went on to Michigan State University but little is known about her time there. In 1962, just a year before her death, she appeared in the Grosse Pointe News after she and a young man pleaded guilty to using a fake ID to buy alcohol.

On Oct. 7, 1963, at Wyandotte General Hospital south of Detroit, Keenan died of an infection following what her death certificate describes as a "criminal recent abortion." The cause of death is listed as:

Infection, often caused by the use of unsanitary instruments, was one of the most common causes of death from abortion in the pre-Roe era, according to Dr. David Grimes, who previously worked at the Centers for Disease Control studying abortion deaths.

Two of Keenan's friends, Frey and Sandra Nye, did not know how she died until Salon contacted them recently. That may have something to do with the fact that George Romney, who would go on to run for the Republican presidential nomination in 1968, had been elected governor just a year before Keenan's death.

"It was all very hush-hush because Romney was governor, and they really wanted this very quiet and to go away," said Nye, who attended Liggett and Michigan State with Keenan. A rumor circulated that Keenan had committed suicide, Nye said, and she did not remember a funeral being held. What did appear was a brief death notice in the Detroit News. It says merely that Keenan died "suddenly," but her parents added that "Memorial tributes may be sent to the Planned Parenthood Association." Planned Parenthood was at that time an organization focused exclusively on birth control and family planning; abortions, of course, were not yet legal. But the group had sponsored a conference several years earlier supporting liberalization of abortion laws.

Mitt Romney was 16 when Keenan died.

We don't know what Keenan's abortion experience was like. She could, like many women who ended up injured or dead from abortions in that era, have tried to self-induce. Douching with soap or bleach was a "common and frequently fatal method," though there were many others, according to Leslie Reagan's book "When Abortion Was a Crime." Big city hospitals treated thousands of women each year for often brutal injuries related to illegal abortions. By the early 1960s, as childbirth became safer, abortion-related deaths made up nearly half of the entire maternal mortality rate in New York City, according to one study.

Alternatively, Keenan may have been able, through a referral from a doctor or through word-of-mouth (perhaps from her fiancé or a family member), to find an abortionist. That abortionist could have been someone with no medical training, or a licensed doctor willing to quietly perform the procedure on the side. Keenan might have been blindfolded and taken alone to an unknown place, a common precaution at the time. But the quality of service could be spotty and conditions were often unclean, a major cause of infections.

Plus, in the face of police crackdowns in the early '60s, the cost of hiring an abortionist was quickly increasing. A woman seeking discretion might have had to travel to another city. And the stakes were extremely high. For women who were found out, there could be disciplinary consequences at college. And there was also, of course, the intense social shaming inflicted on unmarried women who became pregnant.

A story cited in Reagan's book demonstrates just how powerful the stigma could be:

One woman, who had gone to a southern women's college, remembered another student who had an illegal abortion. "She was too frightened to tell anyone what she had done," she recalled, "so when she developed complications, [she] tried to take care of herself. She locked herself in the bathroom between two dorm rooms and quietly bled to death."

Some women who suffered complications delayed going to the hospital out of a very real fear of interrogation or referral to the police -- with fatal consequences. (Though it was typically the providers, not their clients, who were prosecuted.) The data is imperfect, but studies (pdf) from this era suggest that as many as 5,000 women died per year from illegal abortions in the United States. Following the liberalization of abortion laws in several states in the early 1970s and the Roe decision in 1973, the death rate dropped drastically. In New York City, for example, the maternal mortality rate dropped 45 percent the year after the state legalized abortion, according to Reagan's book.

This history is precisely what made Romney's insistence in that 1994 debate that abortion should be "safe and legal" so compelling. That year, he even attended a Planned Parenthood fundraiser, and his wife, Ann, gave $150 to the group. And while he used much more muted language, Romney vowed during his successful 2002 campaign for governor of Massachusetts to uphold the state's abortion laws. But in 2005, as he prepared to seek the 2008 GOP presidential nomination, Romney switched gears and announced in a Boston Globe Op-Ed that he was changing his position, describing himself as "prolife" and arguing that states should be able to set their own abortion laws.

At around the same time, Romney's statements from the '94 debate received new scrutiny. Boston Globe columnist Eileen McNamara interviewed an associate of his late mother, Lenore Romney, whom Romney had praised in '94 for supposedly supporting legal abortion during her own 1970 campaign for the U.S. Senate in Michigan. The associate, who had worked on Lenore Romney's unsuccessful campaign, had no memory of the candidate coming out in favor of legal abortion. Lenore Romney's campaign took place seven years after Ann Keenan's death and three years before Roe. In response to McNamara's column, Romney's office dug up an old platform document from his mother's campaign that offered a muddled-sounding position:

"I support and recognize the need for more liberal abortion rights while reaffirming the legal and medical measures needed to protect the unborn and pregnant woman [sic]."

When he changed his abortion stance, Mitt Romney didn't make reference to Ann Keenan's case or discuss how her own tragic story meshed with his new stance, which effectively called for a return to the way things were when Keenan died. His presidential campaign declined to comment for this story. (And Keenan's older brother did not respond to a request for comment.)

As a political issue, abortion continues to cause headaches for Romney. In June, he declined to sign a pledge by the antiabortion group Susan B. Anthony List, arguing that it would require signatories to defund thousands of hospitals that offer abortion services. But Romney maintained that he would cut funding to Planned Parenthood, that he opposed Roe, and that "abortion should be limited to only instances of rape, incest, or to save the life of the mother."