As the Gulf monarchy cracks down on an international aid group, it hires Qorvis for $40,000-per-month P.R. job 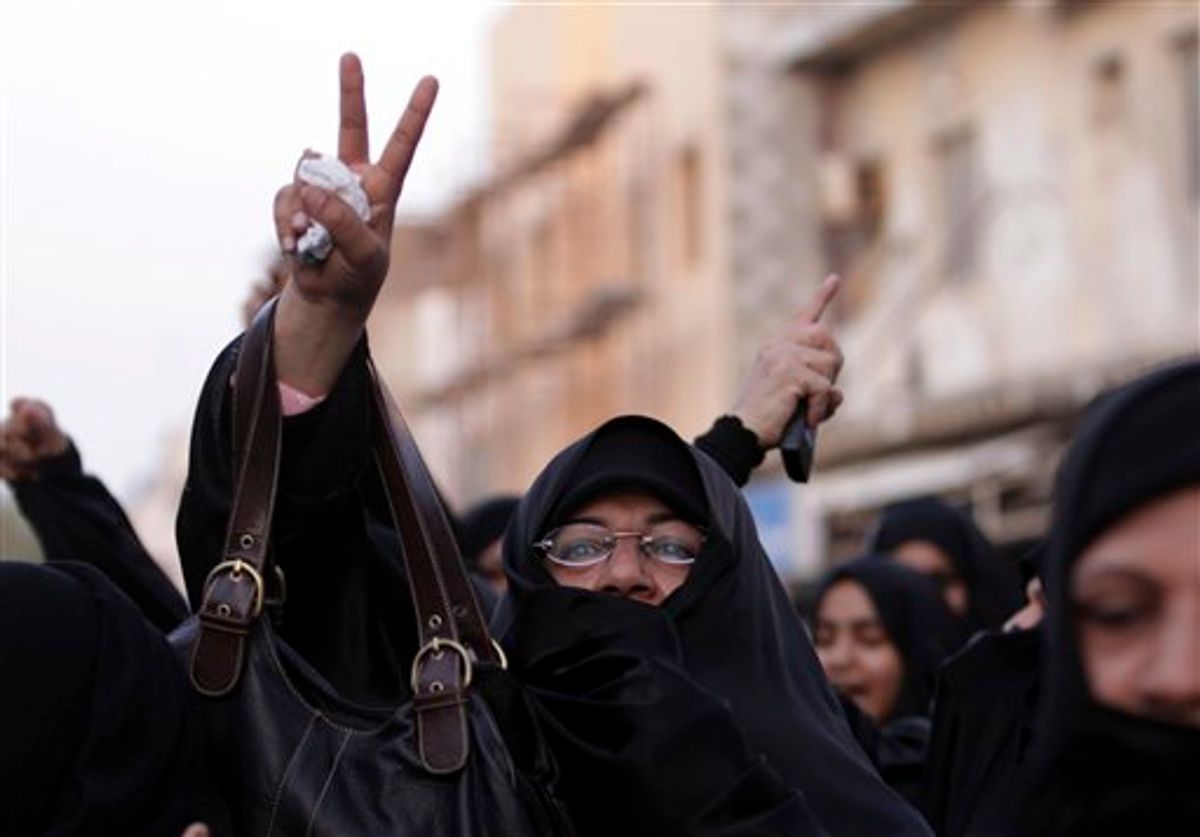 A Shiite Bahraini woman gestures as others shout anti-government slogans outside a public forum Saturday, July 23, 2011, outside a religious community center in Sanabis, Bahrain, denouncing the alleged destruction and vandalizing of Shiite mosques, community centers and cemeteries during a government crackdown on a largely Shiite spring uprising. Clerics who spoke during the meeting, blamed Saudi Arabia for targeting religious sites, because they allegedly distrust their own Shia minority and sent forces to help quell the Bahrain uprising. (AP Photo/Hasan Jamali) (AP)
--

Bahrain is in the news again, this time for what appears to be the comically evil persecution of the humanitarian group Doctors Without Borders.

So, naturally, the ruling monarchy of the Gulf nation has hired a top Washington public relations firm to burnish (or attempt to salvage) its image, according to a new foreign agent registration filing. Qorvis Communications will be paid $40,000 per month, plus expenses, for the public relations work, according to a contract submitted to the U.S. Department of Justice.

Here is the latest on the events in Bahrain, where the Sunni regime's crackdown on a Shia protest movement is now focusing on prosecuting or harassing those -- including doctors -- who came to the aid of protesters back in the spring:

The trouble for the group — which is also known by its English name, Doctors Without Borders — started about a week ago. Activists say a young man who had been protesting in his village was hit in the head at close range by police firing a tear-gas canister.

The protester went to the MSF office in the capital, Manama. Owing to the severity of his injuries, an ambulance was called, and the patient was taken to the hospital. On July 28, the next day, 14 police vehicles pulled up to the MSF office. Authorities raided the building and reportedly took away furniture, medicine and patient files — and arrested the group's local driver, Saeed Mahdi.

Now, the rented villa that used to house the MSF office is locked up and empty.

Qorvis distributed a statement to American journalists writing about the incident, with the Bahrain Health Ministry claiming that Doctors Without Borders "was operating an unlicensed medical center in a residential apartment building."

Qorvis, which promises clients "integrated strategies to help you tell your story better," did not immediately respond to a request for comment about its work for Bahrain. The contract is signed by Qorvis partner Matthew Lauer, who was previously a public diplomacy official in the Bush State Department and a spokesman for the South Carolina Democratic Party.

Earlier this year Huffington Post reported that several Qorvis partners had departed the firm because, in the words of one unnamed insider, "I just have trouble working with despotic dictators killing their own people." Qorvis had previously worked for Bahrain through another PR firm, Bell Pottinger.