Did the Russians bomb a U.S. embassy? 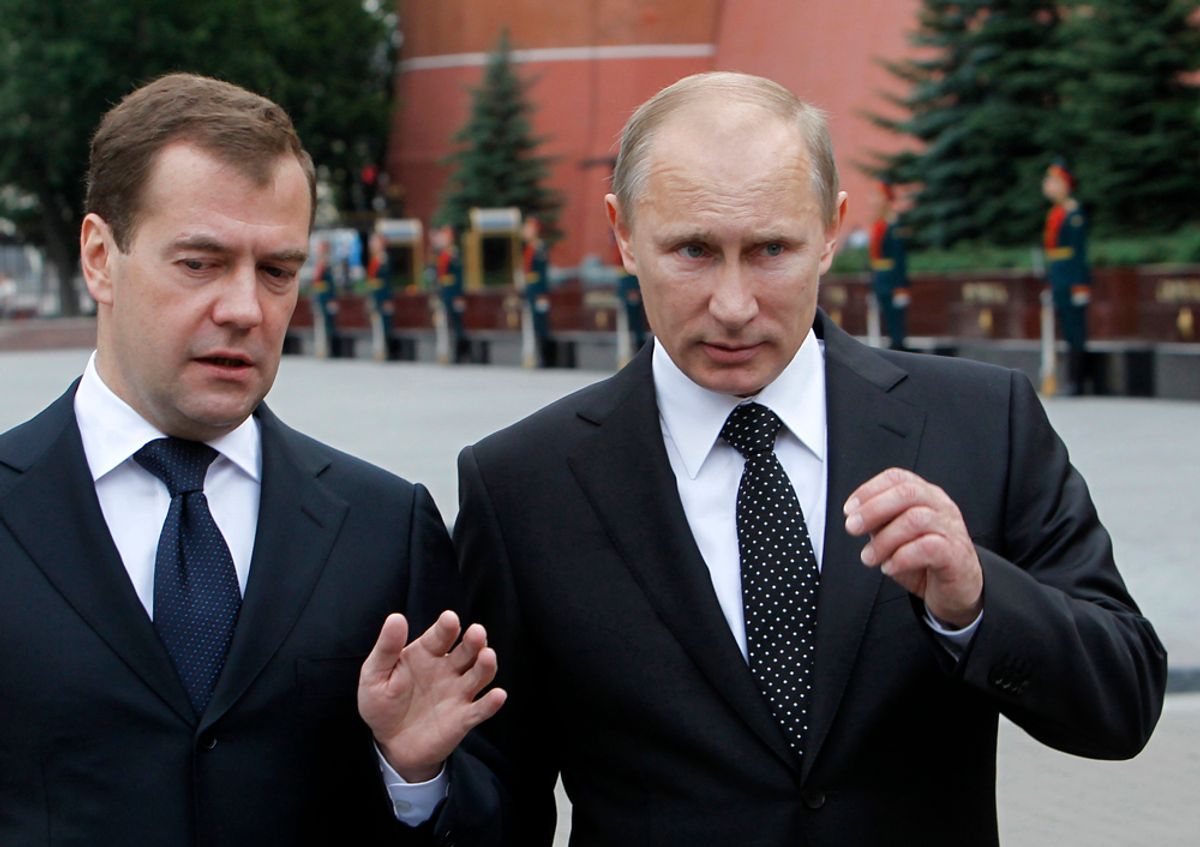 Eli Lake, a Washington Times reporter and one of the most prominent right-wing voices on foreign policy and "security" issues, and someone who has in the past called me an "illiterate child," has published over the past several weeks a number of articles alleging that the Russians were responsible for an utterly bizarre (and thankfully botched) attempt at bombing the US embassy in Tblisi back in September 2010. Media reports have differed on the precise specifics, but there is general agreement that a small bomb (about a kilogram of TNT) exploded, and another was defused, about a hundred meters away from the external wall of the US embassy.

Lake’s first article, published on July 27, is titled "Classified report: Russia tied to blast at U.S. embassy" and confidently asserts that Russian guilt has been proven by the US intelligence community. The central argument of the article is the following:

The highly classified report about the Sept. 22 incident was described to The Washington Times by two U.S. officials who have read it. They said the report supports the findings of the Georgian Interior Ministry, which traced the bombing to a Russian military intelligence office. "It is written without hedges, and it confirms the Georgian account," said one U.S. official familiar with the report. This official added that it specifically says the Russian military intelligence, or GRU, coordinated the bombings.

Well, that sounds pretty open and shut, right? Intelligence reports "without hedges" are rarer than democratic politicians with backbones, so there seems to be little left to do other than alert Moscow that we’re sending in the marines. Lake’s reporting suggests no hints of any disagreement within the US intelligence community, nor does it suggest any alternate possibilities. There is simply conclusive and incontrovertible proof that not only did a Russian military intelligence officer carry out the bombings in question, but, most crucially of all, that he did so under direct orders from his superiors.

Now I am not overly alarmist, but if this were actually the case, if the highest levels of Russian military intelligence have been conclusively proven to be reckless and irresponsible to such a degree that they thought it would be a good idea to place bombs near a US embassy it would be truly terrifying. Indeed if Russia was really that malevolent and aggressively anti-American, if its high-level intelligence professionals thought nothing of trying to bomb a US embassy (which is, of course, an act of war), it would be the most dramatic threat to US security in decades, a threat on an entirely different order of magnitude than the puny bands of al-Qaida fighters our freedom drones are constantly incinerating throughout the Hindu Kush.

Unlike Iraq, Iran, Syria, Libya, or whichever other "rogue state" is the most recent to be accused of developing WMDs, Russia unquestionably has them in large quantities. Indeed the Russian Federation has more than enough strategic and tactical nuclear weapons to destroy all life on the planet several times over, and it has the delivery vehicles to get those warheads anywhere in the world within an hour. And while its conventional military forces are rusting and obsolescent, Russia has intelligence services and spy networks that, while they have arguably fallen on hard times as of late have generally earned a fearsome reputation and are known worldwide for their cunning, efficacy, and ruthlessness.

Compared to the pathetic efforts of al-Qaida and similar organizations to gain access to classified US information or to penetrate the intelligence apparatus, the Russians have proven highly competent at getting agents inside both US and allied Western governments. As just one recent example, the Russians successfully placed a spy at the highest levels of the Estonian Defense ministry and, through him, were able to gain access to thousands of pages of highly classified NATO documents.

All of this is to say that if the Russians have really lost their marbles, if they’ve decided to go all-in on confrontation, ordered their agents to cavalierly go about bombing US embassies, and essentially started a new cold war, then we’re in for some really serious trouble because the FSB is a heck of a lot more organized, flexible, and formidable than al-Qaida. And if the American public was willing to accede to the Patriot Act, one’s mind reels at the sorts of civil-liberties-crushing legislation to which they would assent if they were convinced that Vladimir Putin and his evil henchmen were minutes away from invading.

However, Lake’s second article, "Russia Uses Dirty Tricks Despite US Reset," published a week later on August 4, adds a few details which, to put it exceedingly mildly, complicate things. Unlike the first article which asserted that there was no doubt whatsoever about the involvement of Russian officialdom in the bombing, this article includes a piece of information whose importance is hard to exaggerate:

The single sentence I bolded, which appears more than half-way through Lake’s second story, shows that the US government’s own intelligence agencies can’t even agree on the most crucial question: Was Borisov following orders, or did he act alone? Whatever happened to "without hedges?" Does the fact that another US intelligence agency thinks differently no longer count as a hedge? The fact that the State Department does not think that Borisov was following orders totally negates the most sensational and hard-hitting finding of the earlier story from July 27, a story that was, predictably, bandied about in the conservative blogosphere as evidence of Obama’s cowardice and pusillanimity, the utter failure of the reset, and the essential evilness of the Russian regime.

The basic disagreement between the CIA and the State Department on the most important aspect of the entire episode should be a giant red flag to a journalist, and would lead any minimally inquisitive person to ask a number of questions such as: Since Borisov is not in Georgian custody, what is the nature of the evidence that so conclusively proves he was acting under orders? Videotapes? Audio recordings? A confession from a co-conspirator? And if this evidence from the Georgians is so overwhelming and straightforward, why can’t the State Department and the CIA agree on its interpretation? What specifically led the CIA to attribute Borisov’s activity to the GRU, and what specifically led the State Department to attribute it to a rogue operative? Has the disagreement between the CIA and State occurred from the start, or is it a more recent development? And, at a higher level, what possible motivation would the Russians have to take the almost unbelievably provocative action of bombing a US embassy? And, finally, why would they do this at a time when, by all accounts, their relations with Washington were improving?

But even if those questions are somehow off-limits, anyone with a passing knowledge of the last decade of US history, much less a journalist whose job is to cover the security and foreign policy community, would know that, in a situation where the US government can’t even get its intelligence agencies to agree on basic facts, the most prudent course of action is to wait for more information. How is that the least bit controversial? Am I the only person who remembers the lead up to the Iraq war and the titanic failures at virtually every level of the US government, or is it somehow in bad taste, evidence of a lack of patriotism or a disposition towards "appeasement," to note that our intelligence community really doesn’t have a very good track record on these sorts of things? Before scuttling relations with the country that possesses the world’s largest nuclear arsenal, as would be the only responsible course of action if the Russian government really did try to bomb one of our embassies, is it really so much to ask that our various super-secret-spy agencies come to a basic agreement on arcane and esoteric topics such as, "Did the Russian government actually order the bombing in Tbilisi?"

Of course, the lack of information, and the pervasiveness of classification, is precisely the problem. The US government so routinely classifies such vast troves of information that a great deal of what is first reported as "fact" is later revealed to be little more than unsupported gossip and innuendo. As an American citizen I would like to think that if my country’s sovereign territory has been attacked by the Russian government, I can actually look at the evidence and weigh it for myself and not simply rely on a few snippets of information that has been "leaked" by anonymous "experts" within the intelligence community to a reporter from the Washington Times. To put it more straightforwardly: the consequences of Lake’s allegations are so serious, and have such startling implications, that all of the information about them ought to become part of the public domain.

It should go without saying that none of this suggests that the Russians are angels. It is a dreary thing to have to repeat, but pointing out that specific allegation X about a nasty foreign government might not be true does not mean that one supports, or is positively predisposed to, that foreign government. I’m virtually positive that someone will call me a "Putin apologist" for pointing out that Lake’s interpretation of the bombing makes very little logical sense. Furthermore, given the facts of the matter, even the most favorable interpretation of the evidence suggests that, at an absolute minimum, a relatively senior Russian military intelligence officer went rogue and exploded a bomb next to a US embassy. That is an extremely serious development, and I am not laughing it off.

However, if, as seems likely to me, Borisov was a lone wolf, the interpretation of events is precisely the opposite of what Lake and the rest of the conservative establishment seem to be suggesting. That is, Russia is not ruled by omnipotent evil geniuses who have embarked on a far reaching plan to enslave the freedom loving people of Georgia and destroy US influence in the Caucasus, nor is it run by lunatics who think nothing of lobbing a few kilograms of TNT at a US embassy. Rather, Russia is a relatively ramshackle country with the GDP per-capita of Mexico that cannot even maintain full control over its own intelligence operatives. That is not "good," but it obviously calls for a very different set of policy response and a very different order of priorities.