The exclusively foreign proclivity for violence

In the aftermath of violence committed by Americans, where is the reflection on root causes we demand from others? 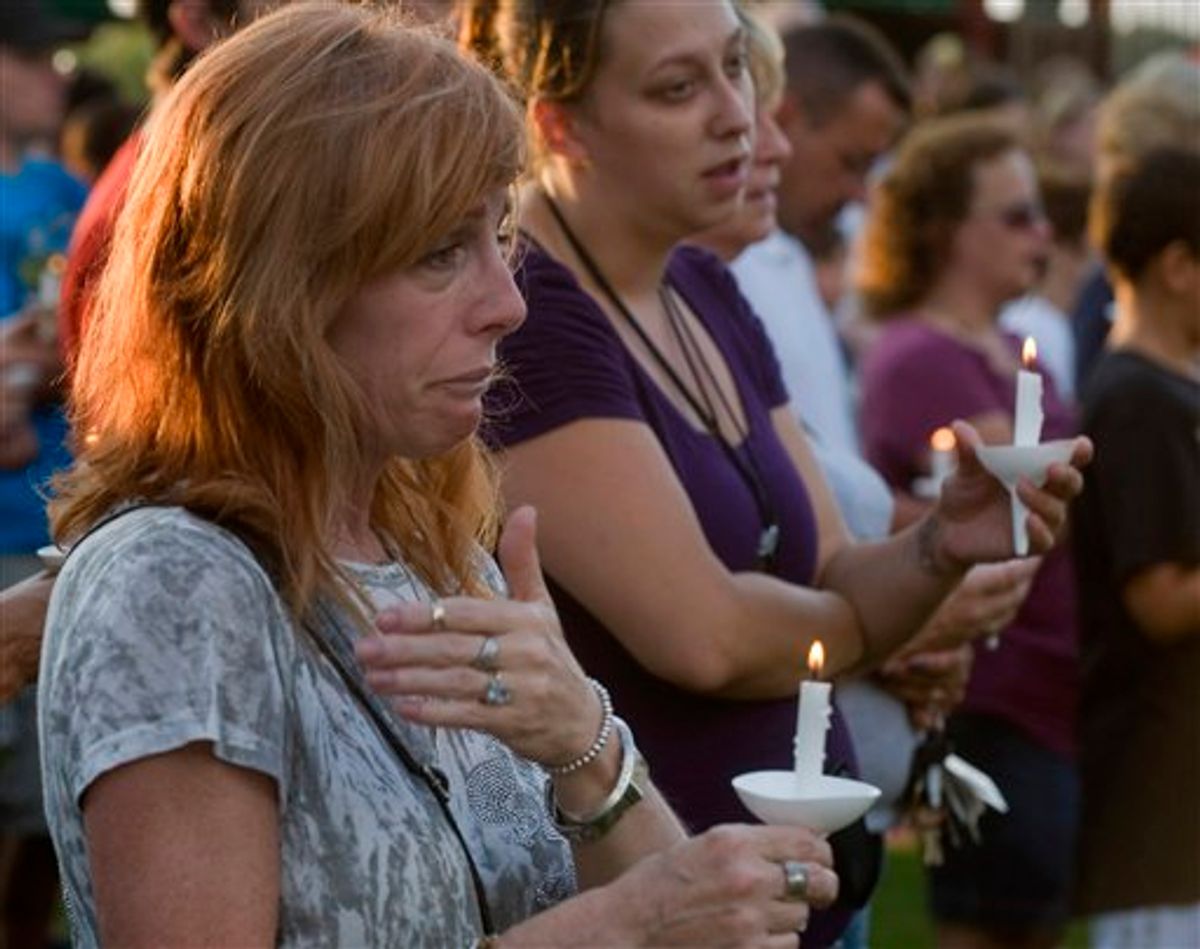 Bambi Lynn of Fairlawn, Ohio, wipes away tears during a prayer vigil at Copley Community Park in Copley Township, Ohio, Sunday, Aug. 7, 2011. A man gunned down two people outside an Ohio home and two more in a car Sunday morning, then shot his girlfriend in a rampage that left eight dead including the gunman, who was shot by police, authorities and witnesses said. Lynn is fearful that one of the victims is a co-worker. (AP Photo/Phil Long) (AP)
--

Mass shootings such as the one this week in Copley, Ohio have become such a normal part of the American news cycle that they barely even register in the minds of most citizens. When a member of society goes on a violent rampage at a school or workplace there are perhaps a few days of news coverage and lamentations over the loss of life but there is generally little societal reflection upon the root causes of these acts or indeed why these types of incidents are so exceedingly common. Furthermore, despite the regularity of these shootings they do nothing to impede the self-perception of Americans as somehow being immune and apart from the nihilistic violence which they perceive as being the sole domain of others.

When violence happens somewhere else, it is because the people of that place are inherently violent and barbaric and it is viewed as a reflection upon their society in general. Individuals believed to be representative of that society are demanded to reflect upon their societal failings and to offer penance for “their” actions. On the other hand when violence happens at home it is not reflective upon the broader society at all and it is always an aberration needing no further explanation, regardless of the shocking regularity with which it occurs. To say that the substantive difference stems from the fact that violence is somehow rare in America, a country which is undoubtedly one of the most stable and prosperous in the world, is to ignore the reality of what goes on in the U.S. on a regular basis. Since 9/11 there have been approximately 150,000 violent deaths in the United States, a figure which is all the more shocking for the fact that it is somehow considered normal in an ostensibly peaceful society.

Of course, the average American has almost no control over preventing atrocities such as the Copley shooting and they rightly feel no compulsion to individually denounce it or to make clear that these types of events are not a reflection of their culture. To say that Americans are somehow inherently violent, or to view Americans in general with suspicion because of an act committed by some American somewhere would be absurd, yet this is exactly the logic which is applied to others around the world. In the wake of an even more grotesque massacre such as the one which occurred at Virginia Tech, there was no questioning as to whether Americans were somehow collectively to blame for one of their citizens perpetrating such an act; the responsibility for the act was ascribed to the perpetrator alone and rightly so. However, when violent crimes are committed by members of other societies it is somehow extrapolated to be an indictment of that society as a whole, regardless of how deeply unpopular the act itself may be within that society.

Here is an example from esteemed former U.S. Institute of Peace board member Daniel Pipes, in the wake of the murder of two popular pro-Palestinian activists this past year:

"These murders neatly sum up the frenzy and depravity within Palestinian society, surely the sickest on earth."

This type of broad demonization of entire countries and ethnicities based upon the actions of individuals is patently ridiculous and yet is the bread and butter of propagandists and bigots. If one chose, the same logic could be held against the United States as well and could be used to maliciously impugn the character of ordinary Americans based on the fact that a significant number of killings also occur on a regular basis within American society.

Another example came in the aftermath of violent protests in Afghanistan following the Terry Jones Quran burning incident. The protests culminated in the violent deaths of staff at a UN compound in Mazar-e-Sharif, about which The New Republic contributing editor James Kirchick had this to say:

"People who riot and murder at the burning of a book do not need a pretext to act like savages. That's exactly what they already are."

Never mind the racial dog whistling in the language (used to great effect by many others as well) while we are looking at the case of Afghanistan how would Kirchick like to characterize the actions of the U.S. soldiers which comprised the "Kill Team," and what implications would he like to draw from their actions about American character and civilization as a whole?

Excerpt from the Rolling Stone article "The Kill Team":

….. the soldiers began taking photographs of themselves celebrating their kill. Holding a cigarette rakishly in one hand, Holmes posed for the camera with Mudin's bloody and half-naked corpse, grabbing the boy's head by the hair as if it were a trophy deer. Morlock made sure to get a similar memento.

No one seemed more pleased by the kill than Staff Sgt. Calvin Gibbs, the platoon's popular and hard-charging squad leader. "It was like another day at the office for him," one soldier recalls. Gibbs started "messing around with the kid," moving his arms and mouth and "acting like the kid was talking." Then, using a pair of razor-sharp medic's shears, he reportedly sliced off the dead boy's pinky finger and gave it to Holmes, as a trophy for killing his first Afghan.

As horrific and undoubtedly "savage" any objective human being would have to admit these actions were, it would still obviously be wrong to smear Americans in general with any such pejorative, or to make sweeping, bigoted generalizations about their culture. As for collectively reflecting upon crimes, if it is too much to ask American society to feel as though they "own" the wars of the past decade and the extreme violence which they have entailed, or that they "own" the members of their society who go on mass-murdering rampages, it is certainly too much to demand any other society feel the same about the crimes of their individual members.