The best way to fight the two-party monopoly 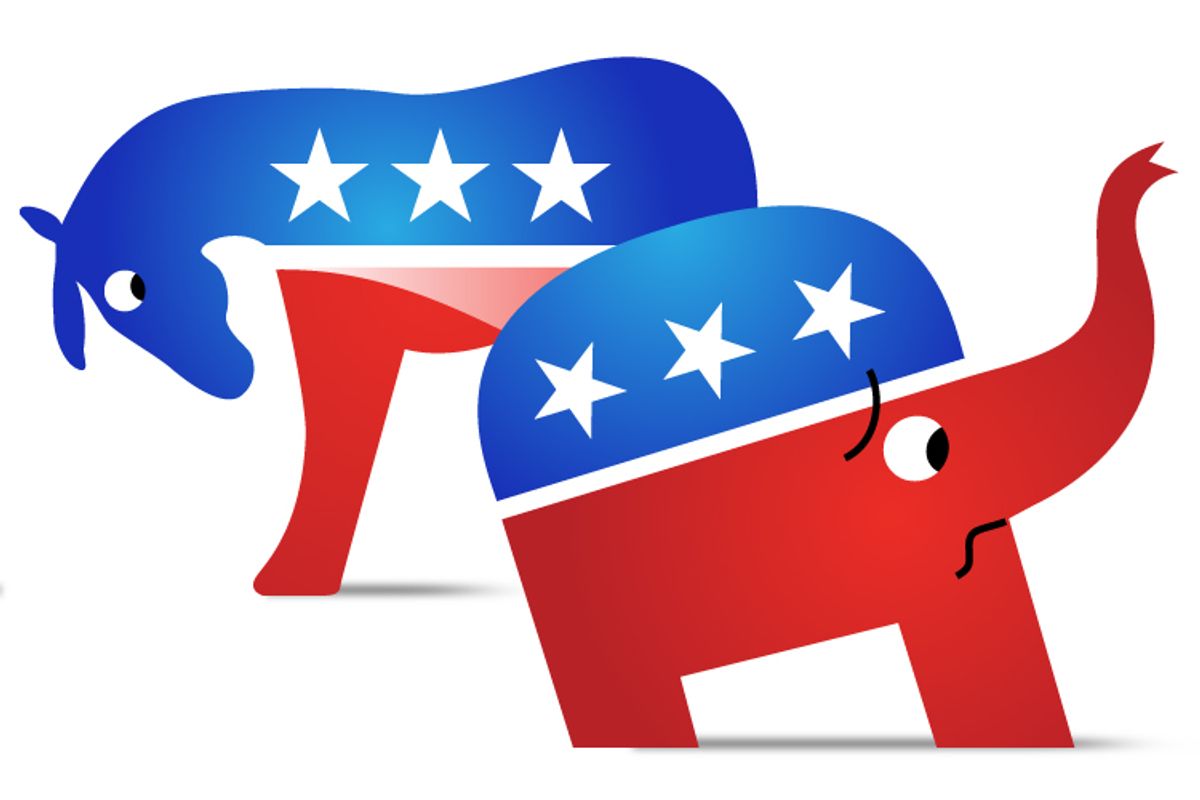 Does America need a third party? Dissatisfaction with America’s dysfunctional political system has produced calls for alternatives to the Democratic-Republican duopoly. But a third major party cannot exist under the rules of America’s electoral system. A single-issue party might inject a new issue into American politics, but the challenges facing the country are too complex for simple answers. What America needs is not a new party but a new movement of reform, a movement that, even if it is largely identified with one national party, includes members of the other.

Most of the world’s democracies have adopted one or another version of proportional representation (PR), an electoral system that more or less accurately reflects the diversity of political views among the country’s citizens. Unfortunately, from 18th century Britain the U.S. inherited the older, less representative system called plurality voting or "first past the post" voting.

Under proportional representation, third, fourth and fifth parties can be elected to the legislature (most democracies that use PR impose rules that prevent minuscule, extremist parties from being represented or holding the balance of power). But under American-style plurality voting, a vote for a third party is usually a wasted vote. Plurality voting means that the winner is the candidate who gets the most votes, even if those votes do not add up to a majority. So in a three-way race in which the Republican wins 40 percent, the Democrat 30 percent and the Green Party candidate 30 percent, the Republican will win, even though 60 percent of the electorate opposed that candidate. If most Greens would have preferred the Democrat to the Republican, by voting for a Green candidate they not only wasted their own votes but also ensured the election of the politician they liked the least.

PR works in multi-member legislative districts. In elections for single offices, the alternative vote (also called the single transferable vote, or instant runoff) is superior to the plurality system as well. Voters list candidates in order of preference, and if no candidate receives a majority, the candidate who wins is the one who, in addition to first-choice votes, gets the most second- and, if necessary, third- and fourth-choice votes. This prevents a candidate who is despised by the majority from winning with a small plurality in a multi-candidate race.

America’s plurality voting rules impose a two-party system on a multi-party nation. Most Americans are neither consistent liberal Democrats nor consistent conservative Republicans. Two groups in particular are disfranchised by the first-past-the-post voting system: populists and libertarians. Populists, with their base among America’s working-class majority, tend to favor middle-class welfare programs like Social Security and Medicare but often have relatively conservative views on social issues. Libertarianism combines free market economics with liberal views on sex, drugs and rock 'n' roll.

A small but growing movement in the United States supports the replacement of archaic and unfair plurality voting with a more democratic system. But in a country that rejected the metric system in the 1970s as un-American, the replacement of our archaic, dysfunctional and undemocratic electoral system is not going to happen soon.

Even under the rules of the current American electoral system, a third party can sometimes serve a useful purpose if it injects a single issue into the bloodstream of the body politic. The historian Richard Hofstadter compared American third parties to bees (actually honeybees), which die after delivering their stings.

Before the Civil War, single-issue antislavery parties helped to prepare the way for Lincoln’s Republicans, and in the late 19th and early 20th centuries proposals from the Populist and Progressive parties pioneered what became New Deal liberalism. Third-party candidacies can have bad effects, too, of course. William Jennings Bryan’s campaign diverted populism into pursuit of the gimmick of bimetallism. Ross Perot’s campaigns contributed to the climate of exaggerated and irrational fear of deficits and debt in the U.S.

While single-issue parties can sometimes be helpful, the challenges that America faces today are too complex to be solved by a single reform. The country’s interlocking economic and political structures have collapsed. They need to be carefully disentangled and rebuilt over a generation or more.

National reconstruction is a task for movements, not single-issue campaigns. Comprehensive, multi-generational, nation-rebuilding movements on this scale are rare. There have been only two in the last century in the United States -- the progressive-liberal movement and the conservative-neoliberal movement.

The progressive-liberal movement was a broad school of thought that included progressive followers of Theodore Roosevelt and Woodrow Wilson and the New Deal liberals led by Franklin Roosevelt and Lyndon Johnson. "Modern Republicans" like Dwight Eisenhower and Richard Nixon formed the right wing of the progressive-liberal consensus. While there were many differences among members of this movement, all agreed that the economic management functions of the national government had to expand in order to deal with the challenges of an industrial, urban society.

The conservative-neoliberal movement, which has dominated American politics since the Carter and Reagan years, has been similarly broad and diverse, including both Goldwater-Reagan conservatives and Clinton-Obama New Democrats. All have agreed with the theory that the economy should be organized chiefly on the basis of the "free market" and that government intervention should be viewed with suspicion and is legitimate only in cases of "market failure" and the provision of basic public goods. Obama Democrats and Tea Party Republicans represent the left and right wings, respectively, of the post-Nixon conservative-neoliberal consensus.

In both its Reagan Republican and New Democrat forms, the conservative-neoliberal school asserted that the beneficial results of "statist" progressive-liberal reforms could be achieved, at even lower cost, by "free-market" methods. You could liberalize trade, at no harm to American manufacturing, and encourage or tolerate the decline of unions, with no reduction in worker incomes. Competition, not regulation, would rein in healthcare costs. You could deregulate airlines and electrical utilities, with no loss in quality of service or danger of bankruptcies and monopoly concentration. And so on.

In the last 30 years, under Republicans and Democrats alike, the conservative-neoliberal approach has been tried. It didn’t work. The result of trade liberalization was not a boom in American manufactured exports, but perpetual trade deficits, the offshoring of production by American companies to low-wage, repressive sweatshop countries, and the targeted destruction of one American industry after another by mercantilist foreign regimes like Japan and China. The result of the decline of unions has been a combination of lower wages and fewer benefits for most American workers. The result of airline deregulation has been chronic bankruptcy, awful service, predatory monopoly and the worst airline system outside of the Third World. Deregulation of electricity produced blackouts in California and the crimes of Enron.

The failure of the conservative-neoliberal theory of how the world works is manifest, even if Tea Party Republicans and Obama Democrats persist in revivals of the old time religion, each according to their own denomination. Unfortunately, there is no well-developed alternative waiting in the wings to make an entrance when the failed actors are booed off the stage.

We can be certain that the next American reform movement will be more "statist" than Reagan Republicans and Clinton-Obama Democrats. No intelligent American can believe any longer that the answer to all economic questions is more deregulation and more tax cuts.

The next great reform movement might build on the best of what remains of the mid-century New Deal, like Social Security, which remains a far more efficient way to provide individuals with economic security in retirement than costly, ineffective Rube Goldberg schemes for putting retirement savings in the casino of the stock market. But producing jobs and adequate income for a middle-class majority made up of service sector workers, in an overly financialized United States facing far greater international economic competition than ever before, will require strategies different from those of mid-century New Deal Democrats and modern Republicans.

It does not follow, however, that the next great reform movement in the United States will necessarily be considered liberal or progressive, rather than conservative or populist. Since the 1960s, the terms "liberal" and "progressive" have become increasingly detached from their older, economic meaning, and have become associated with views on sex and reproduction, censorship, environmentalism, multiculturalism and secularism with an exiguous relationship at best to the questions of political economy that define major political movements. In most other democracies, the right is not defined by free market fundamentalism, any more than were the Eisenhower-Nixon Republicans or the pre-Thatcher Conservatives in Britain. The reaction against the conservative-neoliberal consensus of the last generation, when it arrives, may not take forms that green feminist multicultural civil libertarians would approve.

Nor is it possible in advance to predict which of the two major national parties will be most closely associated with reform. In the early 1900s, the Democrats were still a Jacksonian party dominated by conservative Southern segregationists and Western agrarians, and observers might have assumed that the future of the progressive-liberal tradition lay with the Republican Party of Theodore Roosevelt. In any event, great reform movements include members of both parties. The New Deal coalition included liberal Republicans, and the conservative-neoliberal public philosophy has been shared by many Democrats with Republicans.

The scale of the intellectual challenge provided by the need to rebuild the economy of the U.S. and the world can be measured by the puniness of the proposals put forth today, even by many progressives -- a tax credit here, a little more training there. Important ideas, like the need for public investment by means of institutions like an infrastructure bank, are not yet part of a comprehensive new consensus.

The necessary rethinking of basic assumptions is still only in the early stages. But eventually, if only after years of economic distress and political turmoil, a well-thought-out alternative to the failed conservative-neoliberal order will coalesce. As Margaret Thatcher used to say: "There is no alternative."