The market meltdown and the hopeless politics of 2011 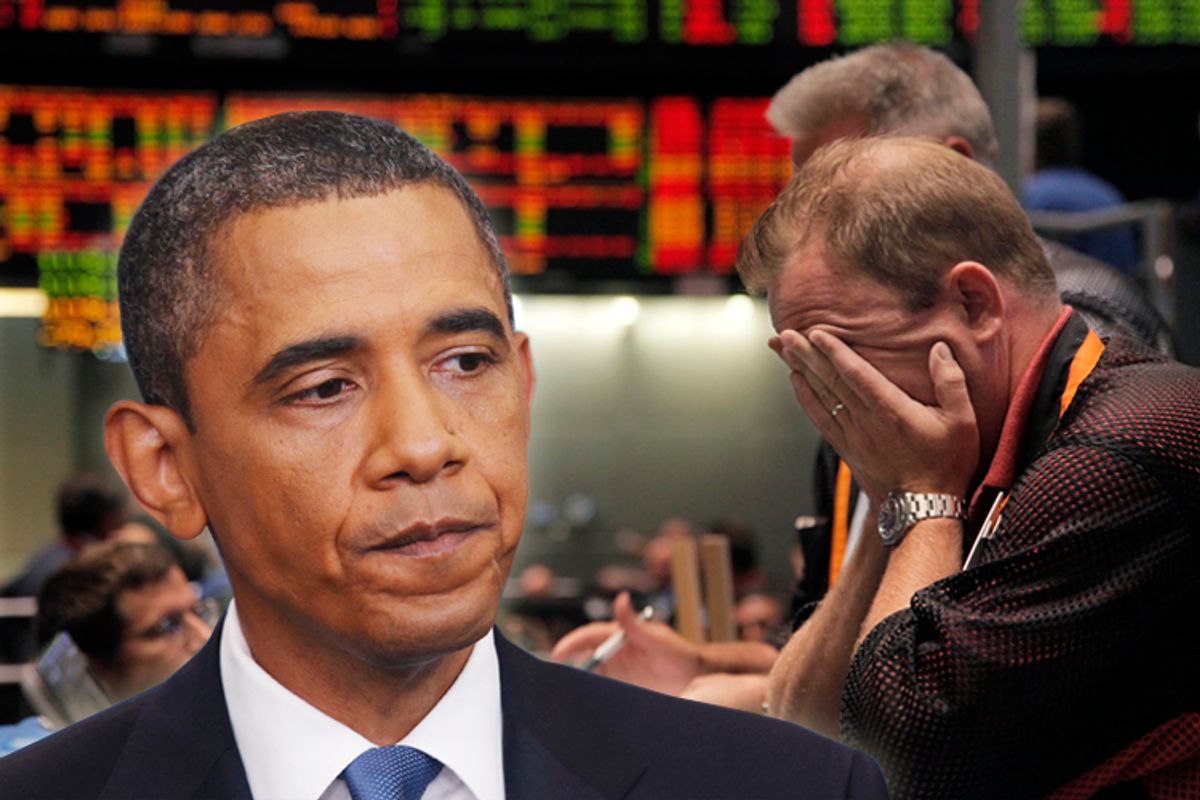 Trader Andrew Stavros reacts after the close of trading in the NASDAQ, 100 Index pit, on the floor of The CME Group Monday, Aug. 8, 2011, in Chicago. Stocks plummeted at the close after anxiety overtook investors on the first trading day since Standard & Poor's downgraded American debt. (AP Photo/M. Spencer Green) (M. Spencer Green)
--

The good news about the carnage on Wall Street -- another 634 points on Monday, with signs overnight pointing toward even more decline on Tuesday -- is that we pretty much know what's causing it: The market has decided that the prospect of meaningful economic growth in the near future is bleak.

The bad news is that we may be powerless to stop it.

This is the bottom line of life under the 112th Congress. The current majority party in the House is at the mercy of rank-and-file members who, either because they believe it themselves or because the constituents they will answer to in their next primary election do (or both), approach every issue with the assumption that President Obama, even if what he is saying or doing actually meshes with what once passed for Republican orthodoxy, is totally and completely wrong. Thus do we now have the spectacle of Obama trying to calm the markets and goose the economy by calling for an extension of a payroll tax cut -- and one of the most influential Republicans in the House suddenly declaring that a tax cut isn't a good idea because it would increase the deficit.

If there was ever a chance that there'd be a follow-up to the now clearly inadequate stimulus that Obama pushed through Congress at the start of his presidency, it vanished for good (or at least through the 2012 election) last November, when the GOP reclaimed the House and increased its share of the Senate. We knew then that the scale of collaboration between the president and the 112th Congress would probably be limited, at best. But what we've seen this past week is that even when they are able to reach a compromise, the results are actually destructive. After all, the market's current nose dive -- more than 1,000 points in the last week -- began just after Obama signed the cuts-only debt ceiling deal. Wall Street can be a highly imperfect barometer, but the market seems to be sending a clear message that it doesn't see austerity leading to prosperity any time soon.

But more austerity is about all that we can expect from Washington between now and November '12. The Republicans who hold sway in the House -- and the opinion-shaping voices of Fox News, talk radio and the blogosphere -- have convinced themselves that runaway deficits are the overriding source of America's economic woes. What's more, they have convinced themselves that these deficits are mainly the product of a spending binge that Obama and the Democratic Congress embarked on in 2009 and 2010 -- and that they can only be arrested through aggressive, immediate spending cuts. Tax hikes, of course, are off the table.

You can point out -- over and over again -- all of the logical flaws in this reasoning, but don't assume it will change anyone's mind. That would assume that the GOP's deficit dogma is coming from a logical place. But it isn't. Instead, it's best understood as a primarily emotional phenomenon, the product of the intense resentment of and resistance to Obama that has defined the party's base (and its opinion-shaping commentators) since even before the 2008 election. The deficit is the respectable-sounding issue that every Republican officeholder can use to beat up Obama, scoring points with a base that wants to see him beaten up and an anxiety-plagued general public that's conditioned to assume that the word "deficit" is evil in all circumstances. Add to this the GOP's post-Reagan aversion to any and all tax increases and the restive, compromise-phobic mood of the party's base today and you have a recipe for absolute inflexibility by the GOP House.

This is why it has been so easy to dismiss as wishful thinking the White House's insistence that the debt ceiling deal will allow for a "pivot" to a jobs agenda. What kind of meaningful jobs program could pass muster with a House that will only accept spending cuts and (certain) tax reductions, and nothing else? And it's why there's no reason to think that the current Wall Street meltdown, no matter how long it lasts and no matter how clearly the market expresses its disdain for austerity, will prompt Republicans to give an inch -- not when they can simply claim that because something bad happened on Obama's watch, it's a direct result of his policies and that he needs to be opposed even more fiercely going forward. Nor is there much reason to suspect that any other ominous economic developments over the next 15 months will produce a real response from Washington. Until the November '12 election, this is the dynamic we're stuck with.

The question  is whether a dynamic more conducive to action will emerge from the '12 election.

There is, for instance, the increasingly plausible scenario of a top-to-bottom Republican victory next year, with Obama losing the presidency (his standing on Intrade dropped below 50 percent Monday night), and the GOP picking up the Senate and retaining its House majority. Under this scenario, the ruling Republicans might actually become more ideologically flexible in 2013, only because they would no longer feel compelled to automatically align themselves against the position of a Democratic president. This doesn't mean they'll suddenly become Keynesians, but we've seen before that the party's attitude toward deficits isn't nearly as hard-line when it's running the show in Washington. Policies that they now deem anathema simply because Obama advocates them could become acceptable to Republicans again. The payroll tax cut that they're dismissing as too expensive this week comes to mind.

On the flip side, if the economy does somehow improve measurably (and there may be some steps Obama can take on his own to increase the chances of this), Obama will be in good shape to win a second term. And if he's in good shape, Democrats will also have a chance of holding the Senate and winning back the House. Five dozen districts that voted for Obama in '08 are now represented by Republicans. If Democrats can pick off half of them in '12, and keep their losses to a minimum elsewhere, they'll be in position to win back the House -- making it possible for Obama to enjoy a productive relationship with Congress again.

But this scenario seems unlikely. If Obama wins in '12, it will likely be in a squeaker. That Democrats would pick up more than two dozen House seats with the presidential race so close is hard to believe. Which means that Obama, even if he is reelected, is likely to face a GOP-controlled House in his second term (and quite possibly a Republican Senate, too). Would that guarantee the same type of gridlock we're seeing now? Maybe -- but not necessarily. It could also be that a failure to unseat Obama, coupled with losses of seats in the House and a failure to win the Senate, could prompt surviving Capitol Hill Republicans to rethink their radical posture -- especially if they conclude that they would have fared far better in the '12 elections by not being so strident.

Realistically, this may be the best-case scenario for Obama and his supporters -- gut it out for the next 15 months, eke out a small but impressive-seeming win, then hope the Republicans of the 113th Congress decide it's in their interests to be just a little bit more open to collaboration.

If that doesn't sound like much to hope for, well, welcome to the politics of 2011.