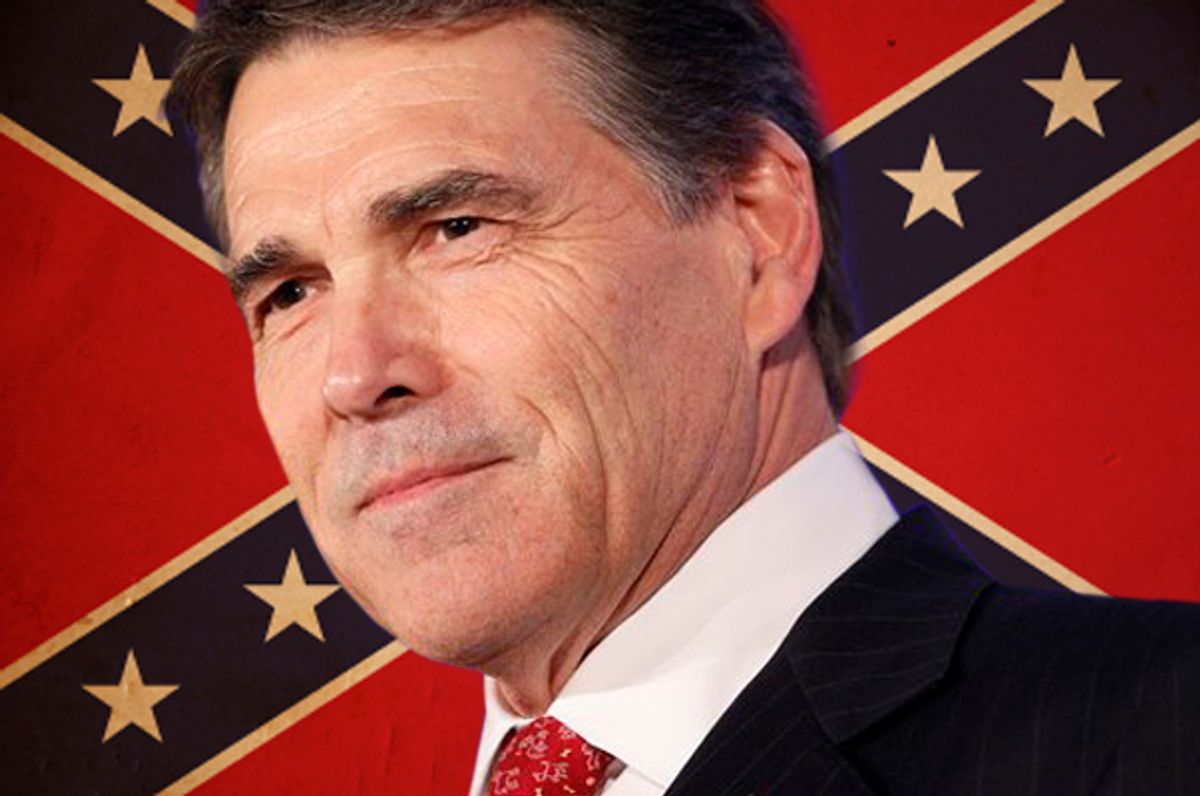 POLITICO, the arbiter of such things, declares Perry electable!

The Texan would immediately be a formidable figure in the race, appealing to conservatives hungering for more options -- particularly in states where the GOP base is heavily conservative, like Iowa and South Carolina, Perry would have an opportunity to unite both tea party activists and more traditional party regulars who want a mix of conservatism and electability.

The Wall Street Journal sums up the Perry message: He is the things Republicans like about Michele Bachmann plus the things some human somewhere theoretically likes about Mitt Romney:

Mr. Perry could challenge Iowa front-runner Michele Bachmann for the support of evangelical Christian voters in the Midwest. He led tens of thousands in a day of prayer this weekend in Houston’s Reliant Stadium. But he could also challenge national front-runner Mitt Romney as the candidate who can best take on President Barack Obama on jobs and the economy. Texas has led the nation in job creation in the halting recovery that followed the 2008 financial meltdown.

Perry, who is not on the Iowa straw poll ballot, will immediately become one of the frontrunners for the nomination if he enters the race, in part because he has support from both the Republican establishment that has (perhaps grudgingly) aligned with Mitt Romney and the fiscal and social conservatives who have rallied behind Rep. Michele Bachmann.

I mean, Rick Perry may be a neo-Confederate sympathizer with a recurring tendency to bring up secession, but he doesn't look as weird in a photograph as Bachmann does, I guess.

Perry's flirtations with neo-Confederate organizations and symbols -- ably documented by Justin Elliott -- are so extraordinarily reprehensible that it should immediately and permanently disqualify him from being taken seriously for national office. The Confederacy was not a bunch of generally well-meaning dudes who went a little too far, it was a gang of racist traitors who launched a bloody war to defend a monstrously unjust institution. Having neo-Confederate sympathies in America should be equivalent to supporting the reconstituted Fascist party in Italy, or worse. It should not be considered something that 50 percent of the nation should be willing to look past, or even embrace.

And if that embracing happens it'll be in part because of a press that won't explicitly describe a disgusting sentimental attachment to a racist, brutal regime of oppression as anything other than an acceptable ploy to pick up Southern white support.