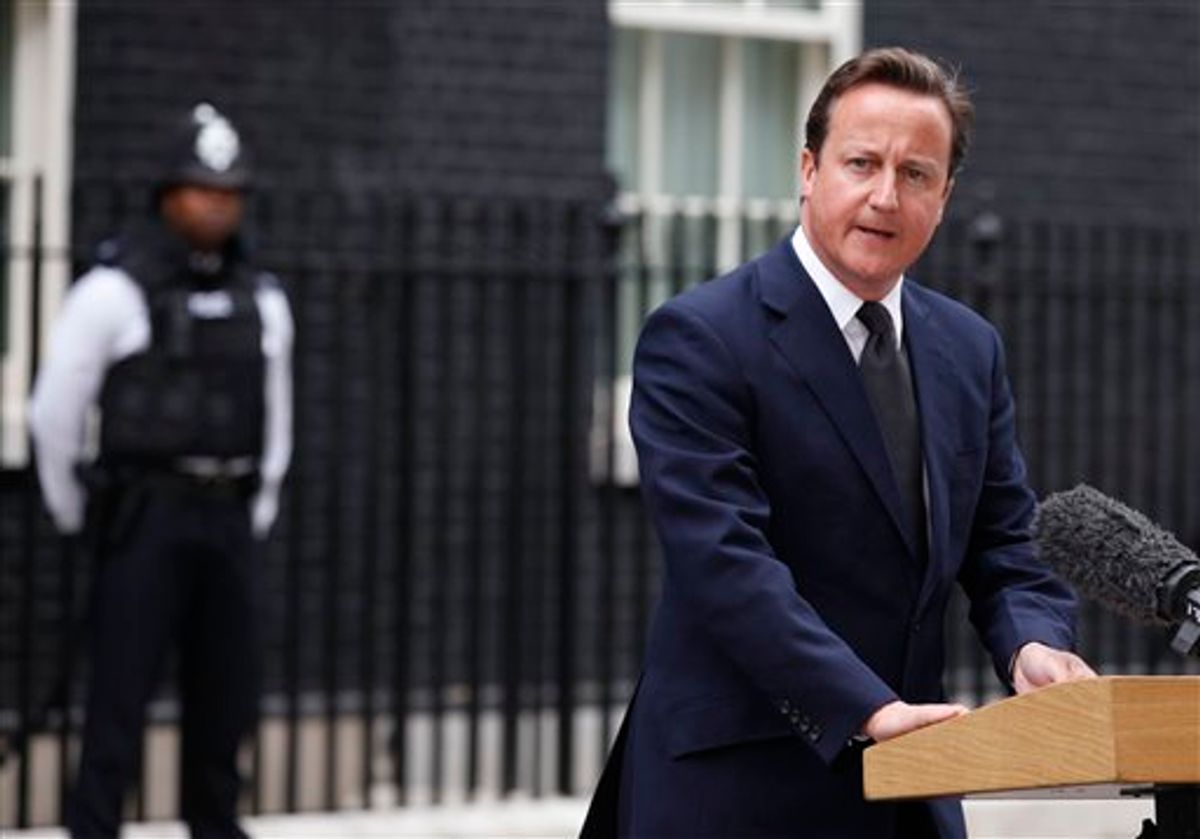 British Prime Minister David Cameron addresses the media outside 10 Downing Street in London Tuesday, Aug. 9, 2011. Cameron announced the recall of Parliament from its summer recess to deal with the crisis touched off by three days of rioting in London. The Prime Minister described the scenes of burned buildings and smashed windows on the streets of London and several other British cities as "sickening." However, he refrained from ordering more extreme anti-rioting measures, such as calling in the military to help the beleaguered police restore order.(AP Photo/Elizabeth Dalziel) (AP)
--

British Prime Minister David Cameron has been unequivocal in his condemnation of the riots that have broken out across the London and other parts of the U.K. in recent days, decrying the scenes of destruction as "sickening."

As a student at Oxford in the late 1980s, however, Cameron was part of a members' club (the British equivalent of a fraternity), which ritualistically smashed up local restaurants. Unlike the rioters, however, Cameron's club, The Bullingdon, was exclusive and notoriously elite.

"This is criminality pure and simple and it has to be confronted and defeated," Cameron said on Tuesday, having returned from his vacation in Italy three days after the riots first ignited in the British capital. He added: "If you are old enough to commit these crimes you are old enough to face the punishment" (referring to the fact tha many of those involved are in their early teens).

The prime minister has never applied such strong words to condemn the actions of his former club.  The Bullingdon Club -- a members' only dining society in the university preserved for the most privileged of (male only) students -- is known for breaking the plates, glasses and windows of local restaurants and drinking establishments and destroying college property in Oxford. (The U.K. newspaper, The Independent, described it as a club "whose raison d'être has for more than 150 years been to afford tailcoat-clad aristocrats a termly opportunity to behave very badly indeed.”) New recruits are secretly elected and informed of this by having their college bedroom invaded and "trashed".

The Conservative leader's affiliation with the Bullingdon and its elite and riotous reputation has at times haunted his political career. In the 2010 election, in which Cameron's Conservative Party won a majority in Parliament for the first time since 1997, his opponents and the media frequently brought up his Oxford past. A television documentary was devoted to one particular night in 1987 -- when both Cameron and the current London mayor, Boris Johnson, were Bullingdon members – during which club members were arrested for causing havoc in Oxford and broke a restaurant window. Cameron claimed he went to bed early on the night in question, but the Financial Times reported in 2010 that he was "most definitely" at the party. An old Bullingdon friend told the paper that Cameron's determination not be caught was "extraordinary."

Today's rioters and the Bullingdon club are diametrically opposed in terms of socio-economic background and racial diversity. Cameron's college cadre were all upper-class and white; the rioters in London are from many different racial backgrounds and are almost exclusively from council estates, the British equivalent of project housing. Unlike the rioters, the Bullingdon club's modus operandi involves leaving large sums of cash or checks behind, to cover damages. It is not traditional, however, that they pick up brooms or face serious recriminations.