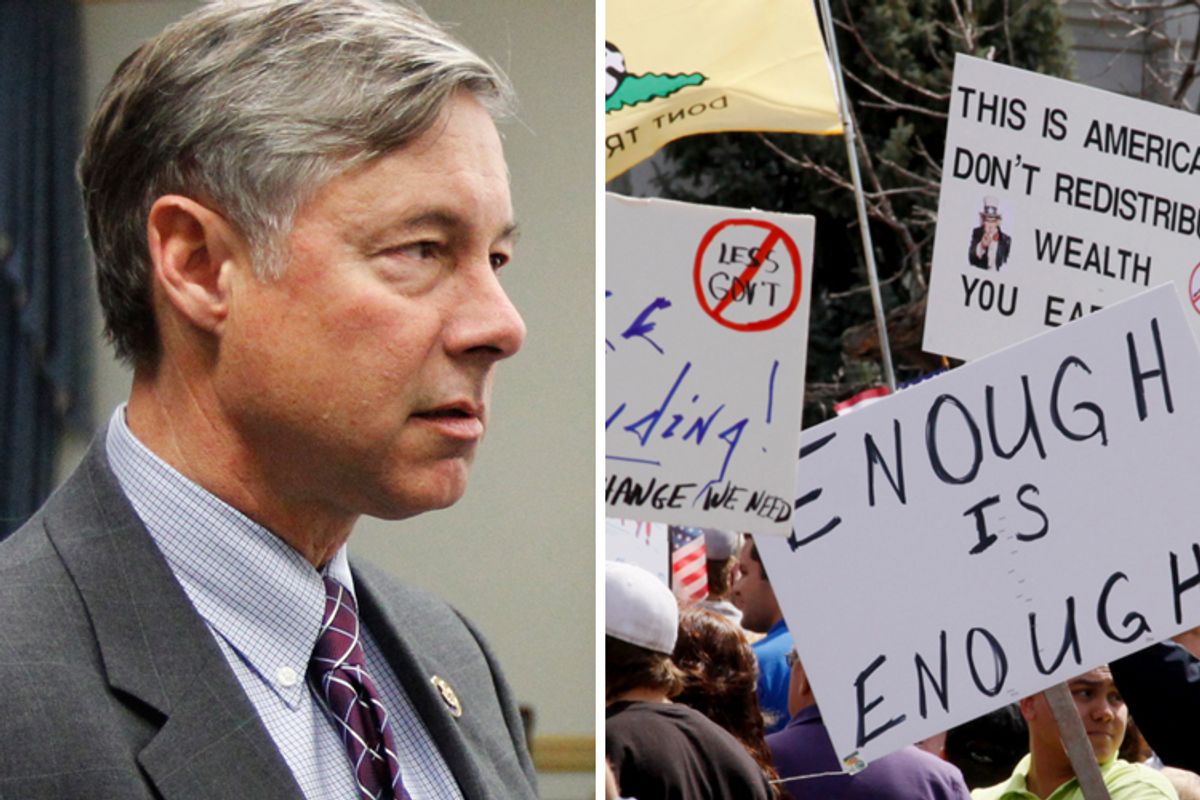 Republican leaders in the Senate and House announced late Wednesday morning the six members they will appoint to the deficit reduction "super committee," and one of Speaker John Boehner's picks immediately stood out: Rep. Fred Upton of Michigan.

This seems -- at first glance -- like a very risky selection. Democrats hope to use the super committee to pursue a more "balanced" approach to deficit reduction, but they'll need at least one of the Republican members to join them. And if you examine his full career, the 58-year-old Upton, who was first elected to the House in 1986, is exactly the kind of Republican appointee Democrats have been hoping for -- an authentic political moderate who has regularly broken with his party and its leadership through the years. Did Boehner just make a big mistake?

Hardly. Upton's story actually illustrates perfectly why hard-line conservatives have nothing to fear -- and why meaningful compromise with congressional Republicans is essentially impossible in the current climate.

Upton came to the House back when its GOP ranks contained a vocal, sizable contingent of moderates. He joined them, although he also teamed up with Newt Gingrich, then a rising GOP star, helping the Georgian claim the party's No. 2 leadership slot in 1989. As a reward, Gingrich named Upton one of his deputy whips, but Upton was a poor match for the position: He broke with his party too often -- along with fellow moderate Steve Gunderson -- was nudged out in January 1993. "The whip organization doesn't necessarily encourage individual thinking," an Upton aide explained at the time, "and Fred's an individual thinker."

This is the role Upton settled into for the better part of the next 16 years, generally voting with the GOP (including on Bill Clinton's impeachment) but bucking the party in some high-profile instances and often seeking compromises with the other side. In the early '90s, he helped to organize the "Tuesday Lunch Bunch," a weekly meeting of several dozen moderate House Republicans that ultimately led to the creation of the Republican Main Street Partnership, and when George W. Bush took office, Upton joined the newly created House Centrist Caucus. It was in that role that he pushed (in vain) for the Bush tax cuts to be tied to a deficit reduction trigger. And later in the Bush administration, he joined Delaware Rep. Mike Castle -- the moderate who lost a Senate primary to Christine O'Donnell last year -- to push for an increase in discretionary spending.

It was Upton's independent reputation that led President Obama to court him intensely during the stimulus debate of early 2009. Upton was invited to watch the Super Bowl with Obama and flew with him on Air Force One to an event in Michigan. But within the GOP, the pressure to oppose Obama was even more intense, and even Upton's fellow moderates began lining up against the plan. With obvious reluctance, he joined them.

The stimulus fight was merely the first reflection of how profoundly the GOP base's resistance to and resentment of Obama would reshape the party. Soon, Tea Party protests began sprouting up across the country, and while the movement's leaders tried to frame it as bipartisan or nonpartisan in nature, it quickly became clear that those who sympathized with it were almost exclusively Republican voters. In a way, then, the Tea Party was just a catchy title for a phenomenon we'd seen before: an angry Republican Party base brought to life by the sudden presence of a Democratic president and a Democratic Congress. Bill Clinton confronted the same hysterical, irrational opposition in 1993 and 1994 that Obama faced in 2010.

But there was also a twist: This time, the GOP base was also angry at its own, convinced that Republican leaders in Washington had sold out conservative principles and contributed to the economic collapse (and to the election of Obama). Egged on by conservative media personalities and more than a few elected officials, this base set out to accomplish two tasks in the 2010 elections: purify the GOP during the primary season and toss out Democrats in the fall.

Upton was a natural target. On top of his long-standing moderate reputation, he had also voted for TARP. A far-right former state representative, Jack Hoogendyk, challenged Upton in the 2010 GOP primary in Michigan's 6th District, charging that the incumbent was insufficiently conservative. Upton survived, but it was a wake-up call; the final margin was just 57-42 percent.

When the GOP won back the House in November, Upton's moderate past again came back to haunt him. Because of his seniority, he was in line to take over the chairmanship of the Energy and Commerce Committee. For most members in Upton's position, winning the support of the GOP's Steering Committee, which handles committee assignments, would have been a formality. But Upton faced three challengers for the job, each of whom played up doubts that Upton would be a reliable party man in the Tea Party era. Upton beat them back, but only by reinventing himself as something of a climate change skeptic. Once upon a time, he had professed that "everything must be on the table" in the fight against climate change, but now he positioned himself as a warrior against the EPA's "power grab" and said that carbon shouldn't be regulated.

The Fred Upton that John Boehner just appointed to the deficit reduction super committee probably isn't the "individual thinker" who defined himself as a middle-of-the-road pragmatist for his first two decades in Congress. More likely, it's the Fred Upton who watched as that reputation nearly cost him his House seat and a powerful committee gavel last year -- and who doesn't want to go through anything like that again.  In a way, picking Upton was a brilliant move by Boehner. It looks like he appointed an independent voice, but there's little chance Upton will act like one.