The campaign to blame Iran for downed U.S. chopper 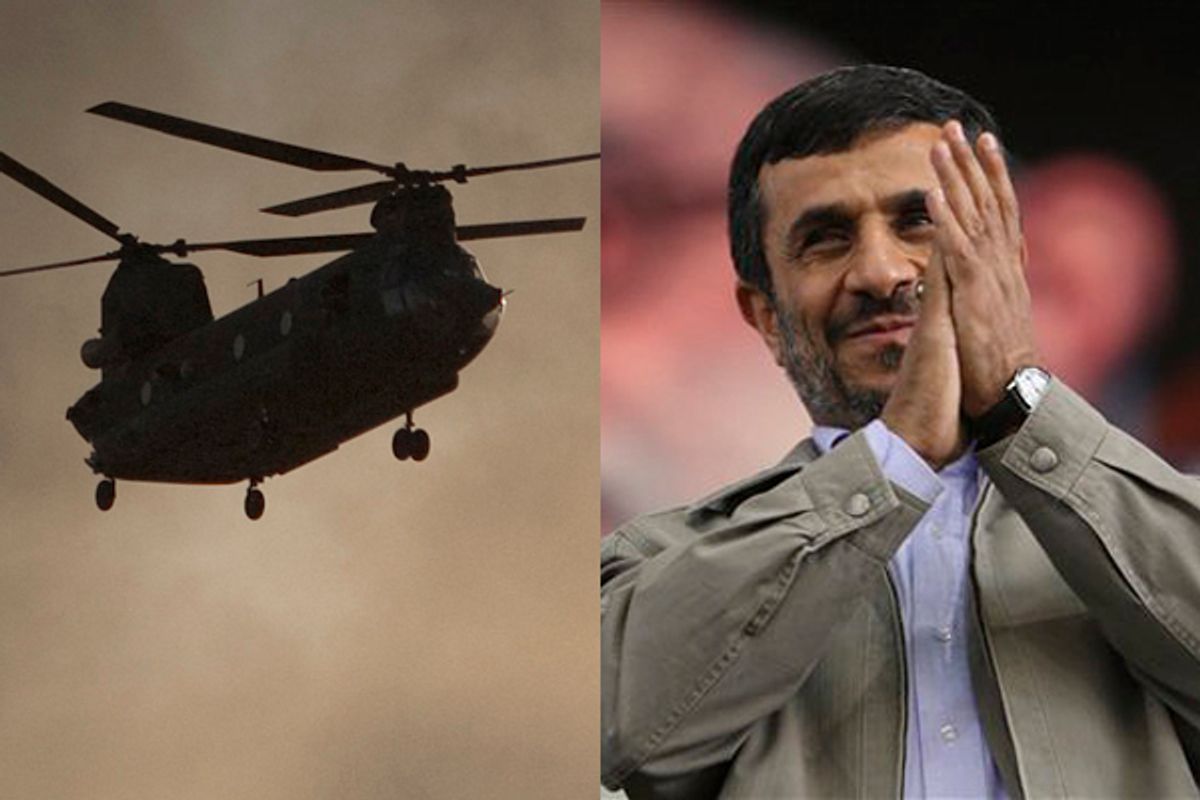 Twice in the past few days important media outlets have aired the claim -- for which there is apparently no evidence -- that Iran was behind the downing of a U.S. helicopter in Afghanistan over the weekend which killed 38.

EMAIL DU JOUR: "My immediate reaction is which foreign intelligence agency is training and equipping the Taliban to do this. I suspect Iran."

I asked Allen about this Sunday, and he emailed that the next day's would have "an alternative view." This appeared in Monday's edition:

EMAIL DU JOUR, responding to yesterday's EDJ, on the insurgents' strike on the SEALs: "Wow someone is trying to blame Iran! Iran had nothing to do with this. It happened in Wardak. Like 99% of fighters and weapons there likely all came from Pakistan. I know everyone wants to hate on Iran. But the enemy in Afghanistan is Pakistan, not Iran."

The alternative view was helpful. But it's still not clear why it's worthwhile (or responsible) to air this sort of inflammatory, and baseless, claim in the first place.

We heard the claim again on CNN Monday night, this time from the paperback thriller author Brad Thor, who was for some reason invited on as a foreign affairs analyst. He told host John King:

I'd like to add that there's word out that what took down this helicopter might be what's known as an IRAM, an improvised rocket assisted mortar. We first saw these with Shiite extremists in Iraq with Iranian fingerprints all over them and that's why I'm so concerned.

They call these things in the military flying IEDs and we don't have confirmation of what brought the helicopter down, but that and the fact that the Iranians have so penetrated not only the Afghan government, but a lot of our indigenous support and our forward operating bases and around the country of Afghanistan -- you know, it makes me wonder, the Taliban, they're good, but, man, I don't think they're this good, John.

I really think this thing is the fingerprints of Iranian cooperation on it.

There are a few problems here. First, the idea that an IRAM rocket was used in this attack was knocked down by a NATO spokesman a few days ago. In addition, even if this type of rocket was used, Thor doesn't cite any actual evidence that it was supplied by Iran. As for whether the Taliban are not "this good," consider the fact that plenty of other American choppers have been shot down by Afghan insurgents in the past decade.

Meanwhile, the Obama administration, which has hardly been shy about going after Iran in recent months (for its alleged arming of insurgents in Iraq and alleged links to Al Qaeda), described the attack as merely a "lucky shot."

Actual journalist Jeff Stein summarizes: Thor "offered CNN host John King a convoluted explanation of the weapon suspected of downing the helicopter, which seems to have been a rocket-propelled grenade, as something uniquely Iranian (as opposed to the Pakistan-supplied weapons they’ve been using for years)."

Now, it's clear that Iran is playing some kind of role in Afghanistan, its neighbor -- but the politics of the matter are far more complicated than Thor and former Bush aide Fran Townsend suggested on CNN. There have been Western allegations of Iran providing weapons to insurgents; though in 2010, Bob Gates called Iranian support for the Taliban "pretty limited." There have also been reports that Iran is providing money to America's own man in Kabul, Hamid Karzai. And Karzai has a working relationship with none other than Mahmoud Ahmadinejad.

If there's any actual evidence that Iran was involved in downing the helicopter, or providing the weapons that did, let's air it and discuss what it means. If not, stop inviting people on TV to repeat politically motivated innuendo.

I've reached out to Thor through his agent for comment, and I will update this post if I hear back. Here is video of the CNN segment (the Iran discussion starts around 3 minutes in):