Has Israel reached a turning point?

Protests have tarnished Netanyahu's reputation, and will likely push his government to hold early elections 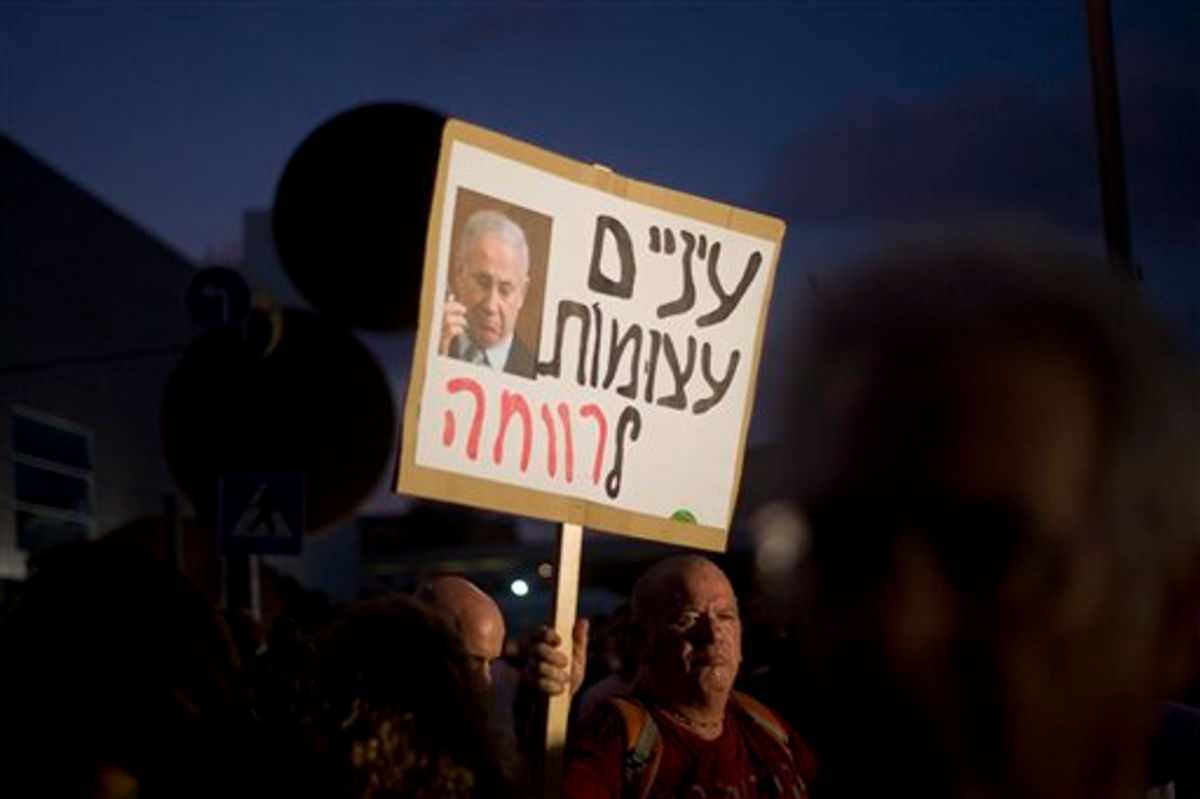 TEL AVIV, Israel -- A longstanding wry joke among Israelis has it that Tel Aviv does not resemble London, a truism enshrined in pop diva Chava Albertstein's famed song, "London."

The implication is that Israel's metropolis is the ragged, chaotic, hot and messy antithesis of the British capital, with its manicured gardens, orderly lines and light summer drizzle.

Not so in the summer of 2011. Tel Aviv remains in the grip of the social protests that have come to define the season, that continue to be peaceable, polite and highly organized even as London veritably burns.

In Israel, intimations of possible early elections are just beginning to be sounded, like the faint but distinctive stomping of a herd gathering. Most significantly, Knesset Speaker Reuven Rivlin, a member of the Prime Minister's Likud party, said two days ago that he "does not believe we will reach November 2013," the date elections are now scheduled, due to the current "social climate."

His children are protesting alongside everyone else, he added. A special emergency session of the Knesset has been set for later this week, in the middle of lawmaker's summer recess.

Since Netanyahu's appointment as then-Prime Minister Ariel Sharon's Finance Minister almost a decade ago, he has been viewed by Israelis as a flawed politician burnished by his reputation as a competent and responsible economic steward. That vision has now been irreparably marred.

Early but unmistakable tears in the political fabric include intemperate statements issued by Foreign Minister Avigdor Lieberman, who yesterday contemptuously derided the "coffee-sipping protesters" of Tel Aviv and provocatively called for Israel to cut all ties with the Palestinian Authority. Israeli analysts concur that he appears to be jockeying for additional right-wing Knesset seats for his Yisrael Beiteinu party should early elections be called.

In the fourth week of protests, Netanyahu finally seemed to have grasped the danger to his mandate and named a committee, denominated the Team for Socio-economic Change, led by the universally admired economist and Tel Aviv university professor, Manuel Trajtenberg, to revise national economic priorities.

Trajtenberg, formerly chairman of the council of economic advisors, demanded absolute independence from the prime minister and later quoted the normally aloof Netanyahu as issuing the contrite admission, "I understand my views need to change."

Trajtenberg then told the prime minister his daughters, too, are participating in the growing demonstrations.

Despite Trajtenberg's personal prestige, the committee's appointment was greeted with almost universal derision in Israel. Social protest leaders called for a Jerusalem march Tuesday night decrying the recently announced 10 percent hike in electricity prices, for protests in peripheral cities such as Ashdod and Beer Sheva this weekend, and for a million person march for Sept. 3

If they succeed, it will be a remarkable event in this nation of 7 million.

In addition, protest leaders immediately appointed their own, alternative committee staffed by academics and economists in many cases no less prestigious than their official counterparts.

Whereas the London riots and looting appear low on popular support, Tel Aviv and Jerusalem's slow-burning protests seem to be supported by almost every sector of the population.

Arab leaders decried the absence of any Arab voices on the 15-man governmental committee, in contravention of regulations stipulating that there be no less than 10 percent minority votes in any government initiative. (Arabs number about 20% of Israel's population.)

Abraham Fund CEO Muhammad Darawshe, speaking at his organization's annual Ramadan banquet, said "the establishment and the government will not succeed in separating Israel's Arab and Jewish population."

"These appointments reveal the governments' total lack of regard for the Arab population. This society needs to engage in greater 'cultural sharing,' in real shared life and not just in a shared plate of hummus," Darawshe said. "This country has to be the nation of the Jewish people and the nation of all its inhabitants. This requires maturity. I don't think Netanyahu grasps this fact."