Why did the London lockdown work?

The city was quiet after nights of riots. Who deserves the credit: The police or citizens who armed themselves? 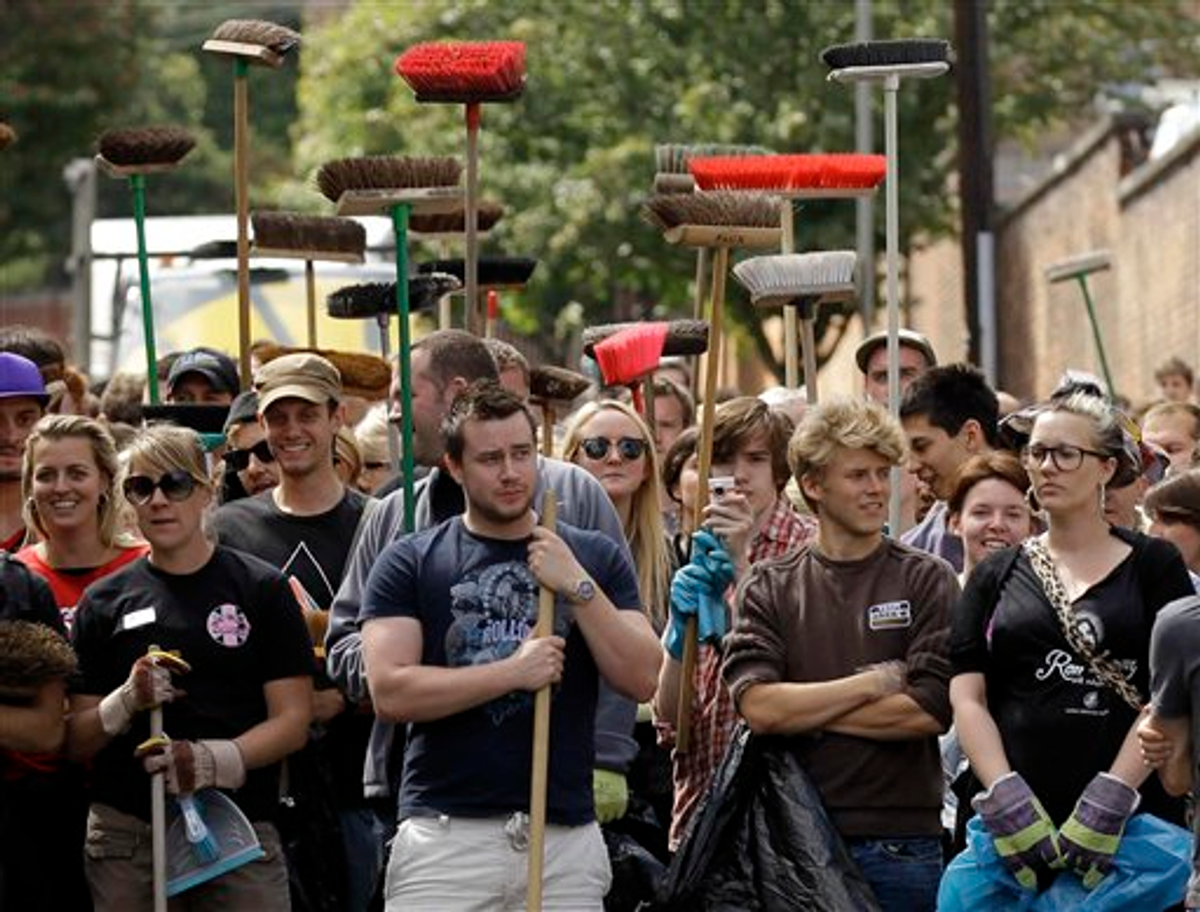 London residents wait to be allowed through a police cordon to help council workers with the clear up after rioting in Battersea, London, Tuesday, Aug. 9, 2011
--

LONDON, United Kingdom -- The London lockdown seems to have worked. After three nights of escalating rioting across the city, last night was quiet. Instead, the looting and arson swept across England's provincial cities from Nottingham to Gloucester with Manchester seeing the worst of the violence.

It is unclear whether London was quiet because of the massive deployment of police -- British Prime Minister David Cameron said yesterday there would be 16,000 on the streets -- or because across the city stores shut early, windows were boarded up, and staff were sent home.

Maybe the rumor that the biggest selling items at hardware stores and online mail-order shops were crow bars and other hand-held heavy metal objects deterred looters. Shopkeepers were clearly preparing to defend their property.

It appears that's what saved the shops in my neighborhood, Stoke Newington, on Monday night. After the rioting started in Hackney central, it moved half a mile west to the shopping district of Dalston. The mob then swung north along Kingsland Road toward Stoke Newington High Street. It's a neighborhood of Turkish Kurdish exiles and almost all the restaurants and shops -- including several gold and jewelry stores -- are owned by members of this community. More than a few of the Kurds have had to deal with the Turkish Army so a couple of hundred rioters weren't going to deter them. Crow bars and kebab skewers in hand they faced down the mob.

One Kurdish shopkeeper, Yilmaz Karagoz, told the Guardian newspaper, "We came out of our shops but the police asked us to do nothing. But the police did not do anything so, as more came, we chased them off ourselves."

Police inaction, or ineffectual action, has been a big talking point in London the last 26 hours. Big questions hover over the Metropolitan Police's handling of these unprecedented events. People accept the logistics are hard enough. Police were faced with spontaneously combusting situations organized in the time it takes for kids with criminal mischief on their minds to text each other locations where the police seem not to be present.

But they do question the effect of the tactics the Met used. Late Monday afternoon, as the rioting kicked off in London, live news feeds showed police trying to clear and hold the streets of Hackney. What they did not show was police grabbing rioters and arresting them. Did that seeming passivity encourage youths watching the disorder to go out in the street?

There are more abstract questions:

First, just three weeks ago, the Metropolitan Police Commissioner, Sir Paul Stephenson, resigned over the News of the World phone hacking scandal. His deputy in charge of security operations, John Yates, also resigned. How much did the absence of the top two commanders affect the planning and strategy for containing the situation as it grew out of control in the capital?

Second, what has been the effect of the death of Ian Tomlinson on police strategy and police morale? In April 2009, during the emergency G20 summit on the global financial system, there was a protest outside the Bank of England. Ian Tomlinson, a bystander, was struck by a police baton and died. The incident was captured on a mobile phone camera. The footage formed the basis for an inquest's verdict that Tomlinson had been killed unlawfully. In June, the policeman accused of hitting Tomlinson was told he will face trial for manslaughter.

How much did that knowledge weigh on the minds of individual policemen on Monday night? How much did it effect the operational orders given that night? Were those orders not as sharp as they might have been because of the sudden change of leadership at the top of the Metropolitan Police?

Among the thousands of brilliant photographs documenting these events is one of a young thug, face covered, confronting a line of policemen in riot gear, shields and truncheons at the ready. He is standing almost nose to nose with one and holding a mobile phone aloft filming the scene. You can easily imagine him taunting the cops with the fact that it's all on video.

Yet the public in London would have had no problem with the cops in that picture cracking the guy's skull, if snippets of conversation eavesdropped in the West End, the shopping heart of the capital, yesterday are anything to go by. Londoners want the police to give the rioters the full monty: water cannon and rubber bullets.

That is unlikely to happen. Rubber bullets call to mind the worst days of violence in Northern Ireland. They are not supposed to kill or maim, but in fact they do. It is hard to imagine Cameron authorizing such a quasi-military weapon being deployed on London's streets.

Londoners are mighty angry at the moment, though, and it would be a popular decision in the short run. There has been an outburst of civic activity to reclaim the capital from the mob. In many areas of the city that experienced looting people have come out and cleaned up the streets themselves rather than wait for the government to do it.

In other parts of the country citizens are helping the police in a way that they don't every day. In Birmingham, Sangat TV seems to have sprung up out of nowhere to show live feeds of police doing their job. This video is rocking YouTube:

But it is not likely to get better for the police. Lost in the coverage of looting was the release of a report by the Independent Police Complaints Commission yesterday into the circumstances of Mark Duggan's shooting. He was the young man whose death at the hands of police last week touched off the disturbances.

At the time police claimed Duggan had fired on them. The report said Duggan did not fire at police officers. A coroner's inquest into the incident has been adjourned until December. No reason was given for the delay.

It is hard to predict how that news will resonate in Duggan's community in Tottenham.