By Elizabeth A. Kennedy - Suzan Fraser 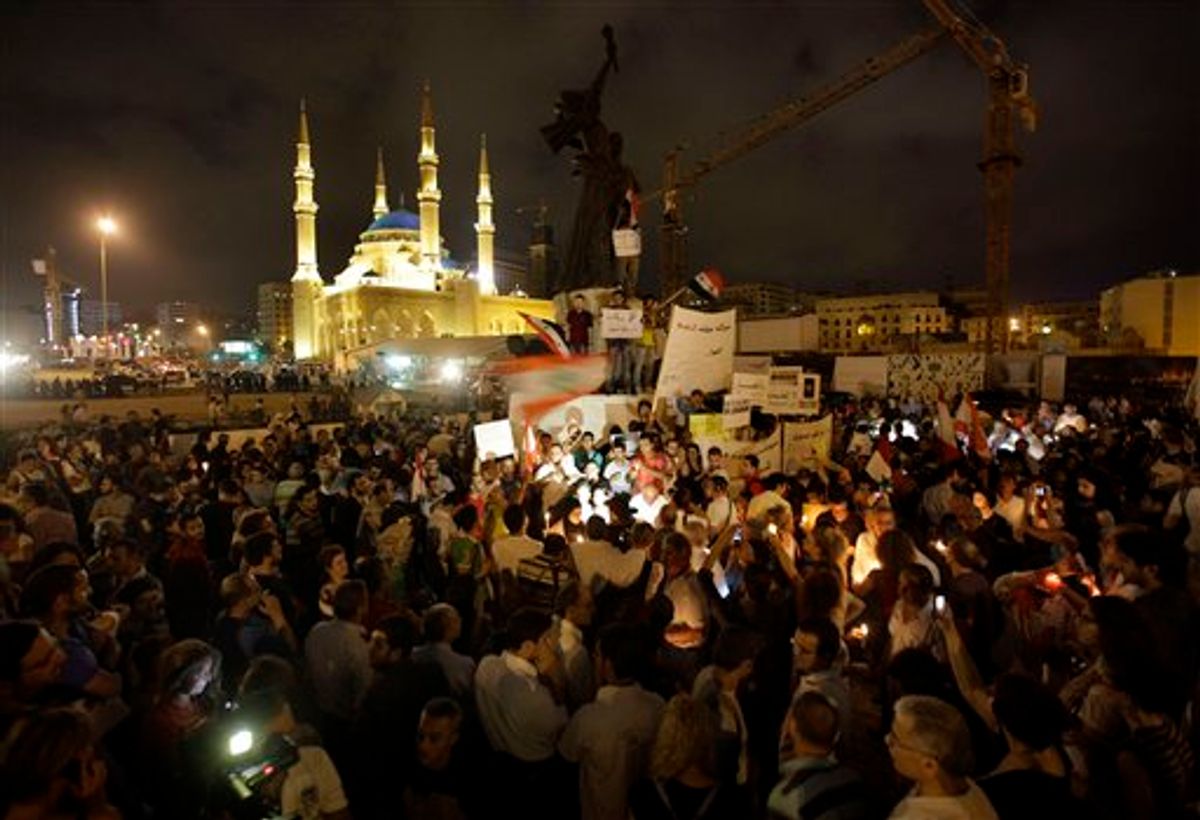 Lebanese intellectuals and journalists protest during a vigil sit-in to show their support to the Syrian protesters who demonstrate against the Syrian President Bashar Assad, at the Martyrs square, in downtown of Beirut, Lebanon, on Monday Aug. 8, 2011. Despite five months of blistering attacks on dissent, the Syrian regime has yet to score a decisive victory against a pro-democracy uprising determined to bring down the country's brutal dictatorship. President Bashar Assad still has the military muscle to level pockets of resistance, but the conflict has robbed him of almost all international support. (AP Photo/Hussein Malla) (AP)
--

Syrian President Bashar Assad came under a new barrage of international pressure Tuesday with the Turkish foreign minister urging him to stop killing protesters and U.S. officials saying the Obama administration is preparing to explicitly demand his departure.

Even as Assad held more than six hours of talks with the visiting Turkish minister, his military unleashed fresh attacks on restive areas, attacks that activists said killed more than 20 people.

Turkish Foreign Minister Ahmet Davutoglu said he met the Syrian leader for more than six hours in the capital Damascus and discussed "concrete steps" to end the violent crackdown on protesters. Rights groups say about 1,700 people have been killed since March. An aggressive new military offensive that began with the Muslim holy month of Ramadan a week ago has killed several hundred.

Speaking to reporters on his return to Turkey, Davutoglu said the talks were cordial but did not say what specific steps they had discussed or whether Assad had agreed to consider them.

"We discussed ways to prevent confrontation between the army and the people and tensions like those in Hama in the most open and clear way," Davutoglu said, referring to the Syrian city that has become a flashpoint in the 5-month-old uprising against Assad's autocratic rule. "The coming days will be important to see if the expectations are being met. We hope that internal peace and calm is achieved and steps for reform are taken."

Assad rebuffed the pressure to scale back the crackdown. Instead, Syria's state-run news agency said he told Davutoglu the government will relentlessly fight "terrorist groups" -- a term Syrian authorities often use for government opponents even though most of those killed are unarmed, peaceful protesters.

SANA said Assad also pledged to press ahead with reforms. But promises of reform of have rung hollow against the backdrop of the crackdown.

In Washington, officials said the administration will call outright for Assad to give up power and hit the regime with tough new sanctions. The State Department signaled for the first time that American efforts to engage the Syrian government are finally over. The White House is expected to lay out the tougher line by the end of this week, possibly on Thursday.

The officials said the move will be a direct response to Assad's decision to step up the ruthlessness of the crackdown against pro-reform demonstrators by sending tanks into opposition hotbeds. The officials spoke on condition of anonymity to discuss internal administration deliberations.

President Barack Obama and other top U.S. officials previously had said Assad has "lost legitimacy" as a leader and that he either had to spearhead a transition to democracy or get out of the way. They had not specifically demanded that he step down. The new formulation will make it clear that Assad should leave power.

Other countries are also stepping up the pressure. Envoys from India, Brazil and South Africa were expected to meet with Syrian officials in Damascus on Wednesday, part of a broad diplomatic push to stop the killings.

Diplomatic pressure has done little so far to stop Syria's regime, a close ally of Iran that is used to international isolation.

But Davutoglu's visit was a significant message because Turkey until recently had close ties to Damascus. Ankara has become increasingly critical of its neighbor over the crackdown that has sent thousands of Syrian refugees flooding across the border into Turkey. As of Tuesday, there were 7,258 Syrians living in Turkish refugee camps.

Syria had been emerging from international isolation before the uprising broke out, and its burgeoning economic and political ties to Turkey were helping open up the country. Turkey, NATO's biggest Muslim member, shares a 545-mile(877-kilometer) border with Syria.

Syrian troops launched fresh assaults on several restive cities and town, including in Idlib province near the Turkish border. Two prominent Syrian activist groups said 22 people, including eight children, were killed across the country. The reports could not be independently confirmed.

A rights activist near the central city of Hama said military operations in the town of Tibet el-Imam just north of the city killed at least five children, four of them from the same family.

"They were playing in the fields when they were struck by gunfire," said the activist, speaking on condition of anonymity for fear of reprisals.

Syria has blocked nearly all outside witnesses to the violence by banning foreign media. It also has restricted local coverage that strays from the party line that the regime is fighting thugs and religious extremists who are acting out a foreign conspiracy.

"The situation in Syria is heading to the point of no return," Egypt's Foreign Minister Mohammed Amr said in Cairo.

Amnesty International and Human Rights Watch called on the U.N. Security Council to escalate pressure on Syria by imposing an arms embargo and more targeted sanctions. The calls came ahead of a key U.N. Security Council debate set for Wednesday at which Secretary General Ban Ki-moon is to deliver a report on Syria.

A Security Council statement issued on Aug. 3 unanimously condemned Syria's authorities for "widespread violations of human rights and the use of force against civilians" but the presidential statement is not considered binding.

"Any honest examination of the facts of the horrific situation in Syria should be more than sufficient to persuade the Security Council to come up with a legally binding resolution, not just a meek statement," said Malcolm Smart, Amnesty International's director for Middle East and North Africa.